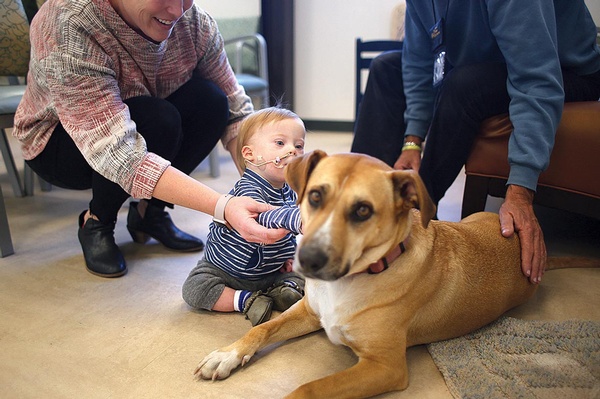 Beckett Clair, 15 months, pets Kiana, the therapy dog, with the help of his mom, Sara, on Tuesday at the Pediatric Partners office in Horse Gulch./ Photo by Jennaye Derge

On a recent Wednesday morning at Pediatric Partners of the Southwest, the waiting room was bustling with activity. An 8-year-old boy played with a toy in one corner, while a mother with an infant strapped to her chest checked in at the front desk. A couple smiled at their toddler as she took halting steps around the room. And a little girl with tight curls tugged at the ears of an Irish setter named Clare.

“It’s like she has ponytails, huh?” said her handler, Traci Moriarty. “If you want to pet, you can pet – she’s a therapy dog.”

Clare whimpered with happiness while another therapy dog, a Catahoula mix named Peach, thumped her tail from a mat nearby. A nurse came out from the back, spotted the dogs and exclaimed, “Puppies!” before rushing over to stroke their heads for a moment, grinning from ear to ear.

Therapy dogs spend two hours each day at Pediatric Partners to help lower the stress levels of kids, parents and staff. Moriarty, founder of Durango Dog College, is an evaluator with K9to5 National Therapy Dog Registry. She has spearheaded a number of programs in the region over the past six years, including “read to a dog” literacy programs at local schools and libraries, and therapy dog support for children called to testify in court. She started the therapy dog program at Pediatric Partners early last year to help a fellow dog trainer, Daisy Dickson.

Dickson’s daughter April was about a year old and having vaccines each month instead of all at once because Dickson didn’t want to overwhelm her system with medication. But little April soon associated trips to Pediatric Partners with getting stuck with a needle.

“It got to a point where she saw the nurse walk in the door and was already bawling,” Dickson said.

She mentioned how distressing it was to see her little girl so upset to Moriarty, who immediately suggested,

“Let’s bring Clare in there.” Dickson asked the administration if it would be OK for a certified therapy dog to be present at April’s next appointment and they agreed without hesitation.

April sat in the exam room with Clare and didn’t care when a nurse entered. When she got her shot, she started to whimper, but Dickson reminded her daughter that Clare was right next to her.

“April took a deep breath and was fine,” she said. “It was amazing.”

The effect Clare had on April prompted Amanda Harrison, RN and nurse manager at Pediatric Partners, to contact Moriarty and ask if therapy dogs could start visiting the practice on a regular basis. After taking precautions to safeguard children with allergies from exposure to the dogs, the program launched and has received overwhelmingly positive feedback. Harrison said some parents even schedule appointments based on when the therapy dogs will be at the practice and sometimes request that the dogs follow their children into the exam rooms.

“I think it’s just great that we have this service available to the community,” she said. “I love the program. It relaxes everybody.”

“We have all ages, and the babies love the dogs just as much as the teen-agers,” Harrison said. “They help the staff out, too. We’re all dog lovers. Zuke’s actually sent us a box of treats for the therapy dogs.”

Therapy dogs that visit Pediatric Partners include Moriarty’s other Irish setter, a deaf pit bull, a Yorkie, standard poodles and a three-legged pound puppy. The dogs are trained to know their job is to lie on a mat and wait for people to pet them. They first pass the American Kennel Club’s Canine Good Citizen test, then the K9to5 test for therapy dog certification. Moriarty said the test evaluates how calm the dogs can remain when being hugged or receiving “heavy pets,” having a child lie on top of them, having a book dropped near them and encountering wheelchairs or crutches.

“They can’t flinch,” Moriarty said. “It has to be the right dog.”

Studies have shown numerous health benefits of children and adults interacting with dogs. Children exposed to dogs at a young age have a lower incidence of allergies and strengthened immune systems. Petting dogs lowers the stress hormone cortisol and blood pressure, and gazing into a dog’s eyes produces oxytocin, a.k.a. “the love hormone,” for both the human and the dog.

“The benefit is dual,” Moriarty said. “You don’t have kids coming out crying, so the stress level here is different, you know? They’re like, ‘Oh, OK, we’re at the doctor’s office and there are dogs – this is fun.’ And the dogs’ reward is being here.”

Kathy Hennek said her 4-year-old Catahoula mix, Peach – who got her name after being rescued from Georgia – gets excited when she sees Hennek pick up her mat in preparation for a visit to Pediatric Partners. She enjoys seeing her dog bring smiles and comfort to children, like the little boy in diapers who left the exam room to throw open the door to the waiting room and sweetly demand, “I want Peach.” Of course, Peach and Hennek obliged.

“I just look at this as a way to give back to the community,” Hennek said. “If you’ve got a special dog, you have to use them.”

Therapy dogs visit Pediatric Partners, 810 E. 3rd St., from 10 a.m.-12 noon on Mondays, Wednesdays and Fridays, and from 2-4 p.m. on Tuesdays and Thursdays. If you would like your pet to become a therapy dog, contact Traci Moriarty at Durango Dog College, 970-259-4455 or visit: www.durangodogcollege.com.