Dishing it out: Don't miss the Boat 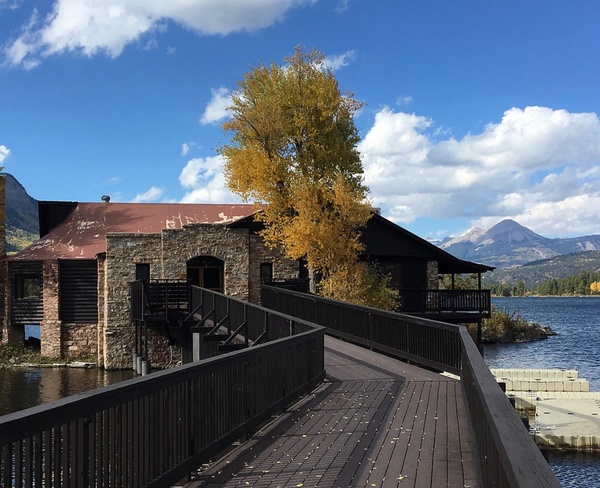 Christian Hatfield - 06/13/2019
You know when you find a restaurant so good you don’t want to tell anyone because you know you’ll never get a table there again? The Boathouse at Electra Lake is getting that good. Damn. I said it out loud.

The Boathouse has long been excellent & hard to get a table at (a portion of seating is reserved for the exclusive
use of Electra Lake owners) but it just keeps getting better. They still don’t have a liquor license (bring your own), only take cash or checks (checks!) & won’t give you a reservation half the time you call (pesky owners) during the busy season (let’s face it: the only season.)
Don’t even get me started on the exclusivity thing at Electra. Anyone who has ever tried to put a boat in the water there knows. I’ve tried five times and never succeeded. Reasons for exclusion included: we only accept boats that have been decontaminated here on-site; we don’t have a decontamination machine, but we ordered one; we have a decontamination machine, but it’s missing a part; we have a working machine, but your trailer was originally registered in Michigan; we have to call the supervisor and he’s not answering; we saw a boat like yours doing a bad thing (I made that one up), etc.
Other restaurants in Durango are Durango good (like “Farmington pretty,” or “her voice is better than it sounds”). But there’s that bored millennial server you’re imposing on, a tired standby on the menu, a fill-in cook who read part of the recipe, etc.
The Boathouse doesn’t have any of those. Jenn and Dave, the couple who run the place, are there to greet you, cook your food, and open and close the place night after night, all season. In-between seasons, they travel and study cooking and food and great restaurants in places where they have great restaurants, like Europe.
Where the difference between a Michelin star and no star, or a whole bunch of Michelin stars is meticulous attention to detail of service, food and ambiance. In other words, the difference between an OK meal and fine dining.
Or an intimate night with someone you have loved for 20 years or an inflatable doll.
It’s where the basic components of why people go out to dinner hit the sweet spot, and you don’t wonder why you aren’t sitting on the couch in boxer shorts drinking PBRs and eating wings.
When you make a reservation, you get a security gate code (exclusive) and drive down a dirt road with a view of the lake and the mountains. There’s an unpaved lot and a long pier over the lake, which leads to the restaurant, perched over the lake itself. If you time it right, the sun will set during dinner.
The restaurant itself is like the best dining hall from your favorite summer camp. It’s an upside-down boat,
with picture windows on most sides, memorabilia and  old photos, plus a real ’70s stone fireplace. During a recent birthday visit, we started with a dozen beautiful oysters, half from the West Coast and half from Massachusetts, my home state. Then scallops, cooked to perfection with a dense green sauce, butter and salt, for dredging. They were accompanied by triangles of polenta perfectly fried, like the best hash browns.
And Risotto. That ever-maligned and imperfectly cooked Italian blank slate. The reason most people never
order risotto except in small towns in Italy where they have relatives is that it’s usually cooked badly, bland or
weird, or just sucks. This is not that risotto. This is the platonic ideal of risotto – where you cook it to the perfect consistency, with just the right amount of shaved cheese and herbs and the exact number of al dente green peas – until there’s nothing left to do but admire it. Bite by bite. That’s some effing risotto.
Dessert, of course. Hand-churned ice-cream and cheesecake. The way cheesecake is supposed to taste. None of this mall-food-court berries and Captain Crunchberries. And just an FYI, there’s no espresso machine. Just good coffee.
Service is impeccable. You know all those meals where the waitstaff start out pushy and aggravating (“I’m Chelsea, and I’ll be helping you all evening!”) and then disappear when you actually want something, like a glass of water?
Not at the Boathouse. The dining room is circular, and service is there when you want it, not when you don’t. I once had a dinner with a 1-year old who drank gallons of soy milk. Then puked and started over. He did that at this
fabulous seafood restaurant in Vancouver. There were four waiters in tuxedos with napkins who swooped in
each time, and perfected the table, kid, everything, in about 3½ seconds. Then disappeared.
Fortunately, my evening at the Boathouse never went that far, but if given the chance, I bet they would have risen to the challenge. Those guys are good.