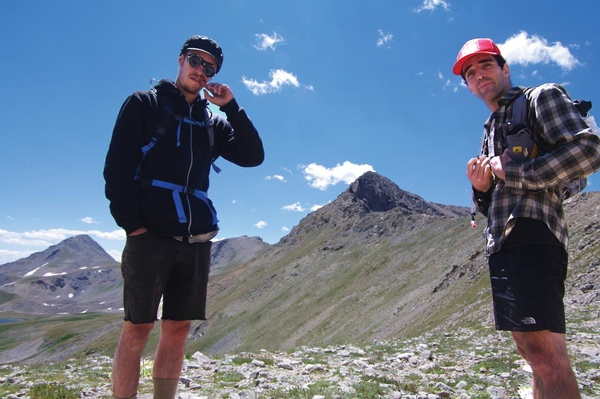 Bayfield native, actor and self-proclaimed mountain goat Mike Largent, right, gets ready to ascend the east ridge of Mount Missouri along with Eric Ludwig, also of Bayfield. Largent used his run through daunting Collegiate Peaks Wilderness, as well as his own personal challenges, as fodder for his play "Move: A Mountain Goat's Monologue."/Courtesy photo

Why do we drink too much on Tuesday nights, procrastinate work, or why, as my friend so gingerly asked me the other day, do I only date emotionally unavailable men? Why do we choose to do these things that will almost certainly cause us pain and anguish, or if anything, sore quads and a headache the morning after?

Maybe we do it for the thrill or because we love “Type 2” fun. We love sufferfests in that we love arriving on the other side, maybe bloody, tired, or heartbroken and bitter, but alive nonetheless.

It’s this masochism that led Bayfield native, actor and self-proclaimed mountain goat Mike Largent to explore some of these questions and turn his findings into theater. “Move: A Mountain Goat’s Monologue”

was originally written by Largent as his senior project for grad school at Arizona State University in 2017. But since then, it has become a traveling one-man and award-winning show visiting places like Tempe, Fort Collins and now for the two upcoming weekends, the Fort Lewis College Theater.

In its earliest stages, “Move” was Largent’s public proclamation of love for the mountains, and his plan for the project was simple. In July 2016, he left Arizona and went back to Colorado to run through some 14,000-foot mountains for a full day without stopping, ideally for 12 hours, and ideally without having to call search and rescue. Then he was going to write a play about it.

His location of choice was the daunting Collegiate Peaks Wilderness, located in the Sawatch Range near Buena Vista. He would run the Belford grouping, which includes Belford, Oxford and Mount Missouri. He tacked on another, Harvard, on the day-of just for more suffering.

In all, Largent logged 11,000 feet of elevation gain over 22 miles, burning, as he mentions in his monologue, calories equivalent to 15 turkey sandwiches.

That’s a lot of turkey sandwiches.

“I experienced everything. Depression, elation, I talked to myself quite a bit ... I found what mettle I’m made of,” said Largent, who now works as an adjunct theater professor at Fort Lewis College. “I had quite a few visitors, and each one brought a whole new set of emotions. None too extreme. It was definitely more bearable while they were there.”

He kept a journal during the three weeks of training and scouting leading up to the run to help him write the monologue when he got back to school in Arizona. But he admittedly didn’t use much of it. “I wrote a first draft and it was garbage, and I had a few people read it who also very gently told me it was garbage,” Largent joked.

But after about a dozen re-writes, he came up with pure gold.

Largent’s final monologue re-enacts his experience of moving through the mountains for 13 hours, using plenty of witty quips, gesticulations and humor. He includes some interesting inner dialogue and outer dialogue from folks he meets along the way and he relives this all on stage with props to boot, including a treadmill to mimic the run and corn chips for snacking.

The jokes and laughs are perfectly weaved in with Largent’s more serious, personal history of alcoholism, depression and donating his part of his liver to a friend.

“It’d probably make for a really nice story to be able to say that I replaced alcoholism with alpinism,” Largent said of the intertwining events. “We even threw out taglines like ‘from the bottom of bottles to the tops of mountains.’ But they’re just not true. They’re just parts of my evolution.”

Which is why “Move” is a story that almost all of us can relate to, whether we’re outdoor enthusiasts or not. Largent touches on the struggles we all battle in a way that folks can relate.

“Strangers would approach thanking me the way a close relative would thank someone for giving them a large sum of money,” he said of past performances. “I forget how personal and vulnerable the show gets.”

But “Move” is not the end of the story. In fact, it’s just the beginning, inspiring Largent to create his new local theater company, Theater of the Wild. The hope is to bridge the divide between the arts and the outdoors resulting in entertainment, self-reflection, appreciation of the wild and inspiration to get out and move.

Largent would like to pass the torch to college students who might be interested in the same kind of outdoor/theater cocktail that he created. And although auditions for the new theater company are open to anybody, Largent is particularly focused on students, especially those who may not have the means for an outdoor adventure.

“At first I was looking for students in the Theater Department who were also athletic and interested in the mountains, and then I realized that that’s malarkey,” he said. “Instead, I went to people who were most excited by the script of ‘Move’ in that they saw the value of the story and saw the kind of thing I was trying to do.”

He ultimately found a group of five students, four theater majors and one outdoor education major, to voluntarily partake in his sequel: a three-week trek through the Himalayas over the next Thanksgiving break. The expedition will be led by a trekking company – although the whole purpose is to get the students out of their comfort zones. “I hope they earn the belief in themselves that goes with doing something one might initially think is impossible,” he said.

Students will keep journals of their individual experiences and then pass them over to Largent when the trip is over. From there, he will write a script that the students, though not required to, will act out for audiences. Though this after-school group does not get course credit, there is much more to be gained.

“I know it will be profound for them, and so the theater that we create will also be profound,” Largent said.

Students are currently fundraising for the trip, and Largent’s upcoming performances of “Move” will also go toward the trip. If all goes well, he said he envisions future Theater of the Wild expeditions, possibly with trips closer to home. But more than anything he hopes to inspire and bring laughter to others in this long, epic journey we call life.

“Others see themselves in the struggles I re-live while I perform these heavy moments of my past and heavy moments in the mountains,” he said. “After studying it and performing it, I’ve discovered that the real takeaway is the importance of others. Especially when putting ourselves so far out there. I hope audiences laugh. A lot. I hope they feel seen and validated.”

But most of all, he hopes they just get outside and move. 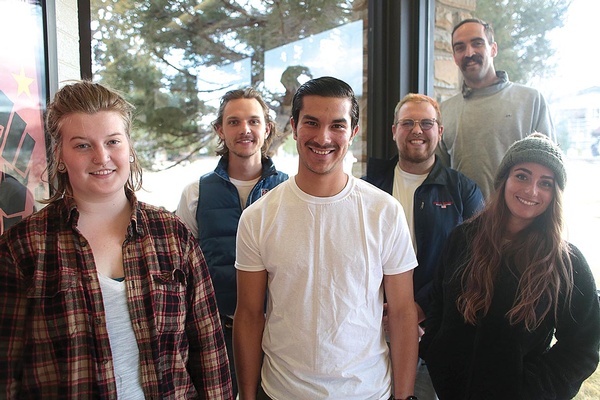 Mike Largent, back right, stands with other members of his newly formed Theater of the Wild. The group of FLC students plans to trek into the Himalayas next No- vember and write a play about its escapades./Photo by Jennaye Derge

What: “Move: A Mountain Goat’s Monologue,” by Mike Largent”