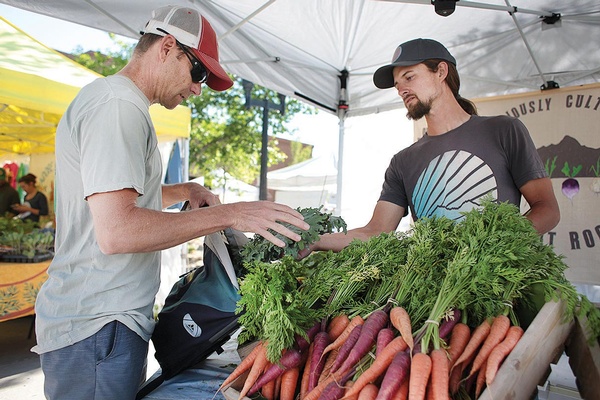 Rob Trudeaux buys carrots from Jordan Meyers, of Summit Roots, at last weekend's Farmer's Market. While cold-season produce is in abundance, there's some bad news for Four Corners fruit lovers this year: much of the stone fruit crop was lost to a late frost./Photo by Jennaye Derge

Last year, we bought a bunch of houseplants. Within a few months, I’d managed to single-handedly kill most of them.

“Why’d you put your houseplants outside?” friends would ask when I’d tell them some of my well-intentioned-but-misguided strategies.

I realized I needed help, especially with the passing of my favorite, Tucca the Yucca, whose tragic story haunts the surviving plants. I meant well, of course, but the more I watered, the worse he looked, his sword-shaped leaves browning by the day. I finally Googled his condition and gasped. It was too late. Carrying his tortured corpse to the backyard, I tilted the heavy pot on its side. A swimming pool gushed forth, goldfish maybe, too. Tucca had drowned, and it was my fault.

So I have a black thumb. It pains me to share this news, but I’m reminded by my emerald-thumbed friends that hope is not lost, and there are many lessons to learn when one steps into the world of growing things.

“Start small,” Darrin Parmenter, county director for CSU Extension, says. “Don’t always worry about the crop. Pay more attention to the soil, the insects, the climate and the wind and how air settles. Take a step back, listen, watch, taste, smell, take lots of notes. Learn the environment, then the environment can dictate what to grow.”

Or not to grow, for someone like me, who’s still stuck in the kindergarten of learning how to raise low-maintenance desert flora. But my optional hobby is someone else’s livelihood and dedication is paramount, local farmer Leslie Kerby says.

Owner of Kerby Orchard outside of Farmington, Kerby says he “learned from the best.” That is, his father taught him everything he knows about tending to the 20 acres of fruit trees that make up his family’s trust. Established in 1945, Kerby Orchard is the last family-owned orchard in San Juan County, N.M.

“All the other orchards started growing houses,” he laughs.

Though it’s nice working with the land and being your own boss, says Kerby, being a farmer isn’t all biscuits and gravy. It’s a year-round job of endless pruning, fertilizing, irrigating, bug-controlling and harvesting. And it’s not exactly lucrative. The 58-year-old can’t even afford insurance.

Though there’s plenty of reason to quit when the growing gets tough, stubborn farmers stick with it, nurturing a life-long practice of patience, which Kerby says he doesn’t have (at least, his wife says he doesn’t). And then, when all else fails, there’s just plain ole stubbornness because, well, that’s what it takes when you’re a risk-taker.

“A lot of us got into agriculture because we tasted a fresh tomato or peach juice dripped off our chins into our beer,” says Parmenter, who’s been teaching farmers for 15 years. “You have to have that passion, but it also takes a certain person willing to gamble their livelihood on Mother Nature, because no matter what steps you take, you’re still working with crops that don’t like temps below 32 degrees, and you’re doing that at 6,500 feet of elevation.”

For an up-close-and-personal encounter with this special breed of human, wander to the Durango Farmers Market on Saturday morning, where more farmers than ever showcase the fruits of their labor. And what a bounty it is so far this year: buttercrunch head lettuce, wasabi arugula, carrots, beets, French breakfast radishes, Japanese turnips and snap peas are just a few of the fresh crops popping up.

“We’re getting into that season of abundance,” says Cody Reinheimer, manager of the Durango Farmers Market.

In the midst of all these crispy salad elements, Farmers Market amblers will notice the underrepresentation of one juicy crop as the season progresses: stone fruits, many of which were lost to late-season frosts. Good news for anyone who grew weary of shoveling smushy apricots from their sidewalks; bad news for non-cynical types, who couldn’t get enough of them.

“It will be a down fruit year for us in most cases,” says Parmenter. “Last year was an anomaly where everything did well. This year’s going to bring every-body back down to earth a little bit. It’s the nature of the beast.”

Parmenter says to not ignore your microclimate, though, looking less at frost dates and more at your particular environment. Some blossoms might not have been affected at all by the April frosts, for instance. While Kerby lost most of his apricot crop, 1,000 natural gas heaters charged by two 50-foot-tall wind machines enabled him to salvage half of his peach crop, half of his nectarine crop and a little less than half a crop of plums.

“Some people lost everything ... It’s sad for them, but good for me. I always hope Durango doesn’t have a whole lot of fruit,” he adds, chuckling.

Lucky for Kerby, apricots aren’t his bread-and-butter. Rather, the 15 varieties of apples he grows are his “money crop,” taking up four-fifths of the orchard’s acreage. This year, a freak mid-May hailstorm gave the young blossoms a pounding, but the most damaging hail usually doesn’t come till monsoon season, says Kerby, so there’s really no telling what’ll be available come Harvest Moon. Last season’s apple harvest, for instance, produced an overabun- dance, so Kerby ended up giving away 25,000 pounds of the teacher’s favorite to the food bank.

This idea of donating unused produce is gaining ground amongst local food advocates. Last year, for instance, the Farmers Market teamed up with The Garden Project of Southwest Colorado to form the Manna Market. Leftover produce that would otherwise spoil between markets is picked up on Saturday and given away to food-insecure families on Wednesdays at the Manna Soup Kitchen Gardens.

In 2016, the Manna Market distributed 6,000 pounds of fresh local produce to over 1,000 folks who needed the nutrients. The free produce stand kicks off June 21 and lasts through October. Individual gardeners are also invited to drop off any superfluous superfoods to be given away.

“It’s important that healthy, good food doesn’t go to waste in our community and rather goes to people who need it,” Sandhya Tillotson, executive director of The Garden Project, says.

Besides filling a niche for food-insecure families, The Garden Project is also nurturing a community-wide harvest by continuing to support Durango’s journey toward food security. For anyone looking to volunteer or for struggling wannabes (like me), bring your gloves for workdays at the Manna Soup Kitchen Garden every Wednesday morning.

You’re sure to learn a thing or two while offering a much-needed service to the Soup Kitchen.

For the little ones, the first of three Jr. Gardeners week-long summer camps starts June 19. A cornucopia of educational opportunities abounds for adults, too, like the monthly Conservation Workshop Series. “Homegrown Herbs,” the next presentation, takes place on June 22, when The Garden Project partners with Maria’s Bookshop for a garden walk and book-signing with ethnobotanical herbalist Tammi Hartung. And for the Durangoan who likes to mix learning with bike time, tickets are now avail- able for the 11th annual Tour de Farms, a cycling tour of local farms and gardens taking place Aug. 19.

As the growing season winds down and builds toward its crescendo, The Garden Project celebrates with its annual One Garden at a Time farm-to-table dinner and cocktails held Oct. 12 at the Manna Soup Kitchen Garden. This year, culinary art students will be the presenting chefs, using only local ingredients to cater the dinner. Tickets will go on sale in August.

Meanwhile, Local First, a nonprofit that strives to make Durango’s local economy sustainable and thriving, will host its annual Harvest Dinner on Sept. 9. This elegant fine-dining experience takes place on the Smiley Building lawn under twinkle lights to the sound of live music and clinking Mason jars. As attendees mix-and-mingle with local farmers, some of Durango’s most esteemed chefs and innovative restaurateurs will be busy crafting a special five- course meal of lip-smacking, all-local ingredients. Due to Mother Nature’s fickle whims, the Harvest Dinner menu won’t be revealed till the evening of the event, but goodness is guaranteed.

The event is not only a fundraiser for Local First; it’s for anyone who wants to raise a glass to the farmers that keep us inspired and well fed. Tickets for the Local First Harvest Dinner go on sale June 20. These are expected to sell out immediately, so get ‘em while they’re hot, and get excited to honor all things local food and the dedication and boldness it takes to provide for our hungry community.

“Most people don’t understand how much work farmers put in,” says Kerby. “It feels real good when people thank you for growing food.”

Thank you, farmers. And RIP, Tucca. May my tomato starters not join you in the backyard dust. 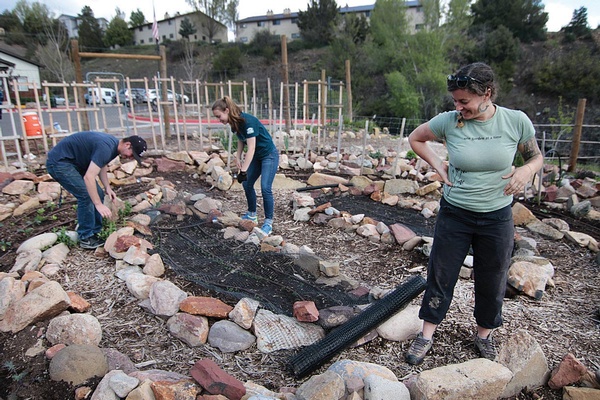 Locals can get their green thumbs on Wednesday mornings at the Manna garden./File photo

Planting a seed: Where to get the goods (or learn to grow your own)

• The Garden Project of Southwest Colorado: For a full list of summer events, camps and classes, please visit thegardenprojectswcolorado.org or call 970.259.3123.