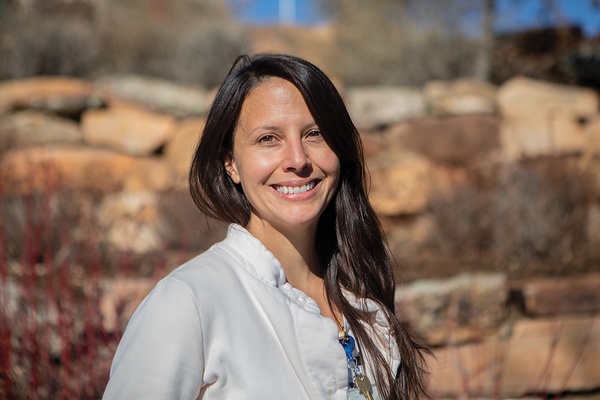 Local nurse Amber DeHerrera recently traveled to Tanzania as part of Mercy Medical Center's "Helping Babies Breathe" initiative. The program, administered through the World Health Organization, aims to reduce infant mortality by teaching health-care workers how to respond to some of the early danger in resource-constrained settings./ Photo by Stephen Eginoire

You don’t remember the first time you took one; none of us do. But if you’re reading this article, you figured it out and are still doing it to this day. You’re holding it right now, waiting for me to run out of mine and get to the point.

Ahh, breath: the process of taking air into or expelling it from the lungs. Your mother did it for you while you were in the warmth and safety of her womb. As soon as you were forced out into the world, you gasped to take in as much as your tiny lungs could handle, resulting in a soulful cry heralding your entry into life. If you didn’t breathe, someone rubbed you hard on the back, chest or feet to stimulate the action, and if that didn’t work, a manual resuscitator might have been used to do the job for you.

According to statistics, one in 10 of us struggled to find our first breath in what’s called “The Golden Minute” – that debut 60 seconds when a baby should be breathing on her own or ventilated with a bag. The consequences of not breathing within the span of The Golden Minute are tragic, often leading to permanent brain damage or death.

In the United States, six of every 1,000 babies born each year don’t make it to 28 days old. For contrast, on the other side of the globe just south of the equator in Tanzania, roughly 106 babies die each day before reaching a month old; nearly 30 percent of these deaths are due to birth asphyxia, that is, not finding a breath during The Golden Minute.

Espying an opportunity to help reduce this number, also known as the neonatal mortality rate, the World Health Organization and the American Academy of Pediatrics created Helping Babies Breathe. This program teaches health-care providers around the world how to respond to some of the early dangers faced by babies in resource-constrained settings.

As a train-the-trainer model, the two-day course is designed for health-care professionals – ranging from birth attendants in developing countries to midwives conducting homebirths in Durango – but is basic enough that trainees can easily share what they’ve learned with coworkers, family, friends or anyone who might be in the room when a baby is born not breathing. Trainees can take their official training one step further and become master trainers, qualifying them to facilitate other HBB courses.

In 2018, the Mercy Health Foundation, the fundraising arm of Mercy Regional Medical Center, received a grant through Centura Health’s Global Health Initiatives that allowed the hospital to introduce HBB to its program offerings. Beyond trainings held in Durango, HBB is also now an extension of the 15-year-old Mercy Tanzanian Mission Project.

Oddly enough, both the Tanzanian Mission Project and Mercy Regional Medical Center owe their existence to a group of Catholic nuns called the Sisters of Mercy. In 1882, five Sisters shuffled off the train and onto the dusty, saloon-bedecked streets of Durango to build and operate the region’s first hospital. Their mission was to turn no one away, even if that meant accepting unusual forms of payment, like sacks of potatoes, plucked chickens or whiskey, a veritable medicine in those days.

(Note: More than a century later, Mercy Regional Medical Center still abides by the concept behind that mission but is bound by health-care governances to not accept livestock or libations in lieu of dollars.)

In 2003, two Sisters of Mercy once again showed up in Durango, this time fresh off the plane from Tanzania’s Catholic Diocese of Mbulu. Sisters Basilisa Panga and Ansila Tembo proceeded to help build an unlikely bridge between the hills of Durango and the hills of the Manyara Region of Tanzania. The partnership has since evolved from supporting small-business loans for women into an outreach program that sends Mercy’s doctors, lab techs and nurses to share their vacation time, supplies, skills and ideas with health-care providers in Tanzania.

One of the project’s chief arenas is Dareda, a two-hour’s drive south of Mbulu. Like Durango, Dareda sits around 5,600 feet above sea level and is home to around 18,000 people. The similarities would stop there, if it wasn’t for the Sisters of Mercy and their gifts to the two remote mountain towns.

The most recent collaboration between the two destinations is the HBB training held at the Dareda Hospital, an old ward-style hospital that treats patients suffering a full spectrum of Africa-esque ailments, ranging from typhoid and tuberculosis to hyena attacks. Among other challenges, there’s no ambulance service and most health-care providers tout little more than a two-year nursing degree.

The hospital’s birthing center, for instance, supports 300 births a month. Comparatively, 800 babies are born annually at Mercy Regional Medical Center. Fun fact: As the African continent’s fastest-growing country, Tanzania welcomed approximately 2.1 million newborns in 2015, that is 5,700 every day, according to Unicef.

“They call it ‘babies falling from heaven,’” Lauri Wilson-Lacy, of the Mercy Health Foundation, said.

In Dareda’s maternity ward, twin-sized cots sometimes hold two mothers lying head-to-foot with babies between. Though relatively clean compared to other medical dispensaries scattered throughout the surrounding countryside, the hospital requires patients to provide their own bedding, food and any other personal comforts they’ll need throughout their stay.

The Tanzanian Mission Project offers some relief for these patients by providing much-needed medical resources and trainings for hospital staff. In return, Mercy’s traveling health-care professionals are exposed to an invaluable experience that changes the way they practice medicine when they get back to the Four Corners.

“Africa teaches you to see differently,” Amber DeHerrera, a registered nurse at Mercy Regional Medical Center and program participant, said. “The people are so welcoming, kind and respectful. What they do with the few resources they have is really inspiring and makes me want to be even more grateful for what we have here and utilize these resources in a non-wasteful way.”

DeHerrera serves as the Country Champion for the HBB program. In October, she traveled to the Dareda Hospital and trained 18 participants to become HBB providers. Six of those were chosen to become HBB master trainers. The next HBB training is scheduled for February, but the need to raise awareness and funds continues beyond February in order to usher in the program’s next two phases of programs: Helping Babies Survive and Helping Mothers Survive.

“The goal of the program is to have a trained person at every birth,” said DeHerrera. “For as many people as there are in Tanzania, it’s rare for there to be someone around at the exact moment a baby is born. At a medical dispensary, for instance, there could be one nurse on duty, while five moms are giving birth.”

While the grant covers her travel expenses, DeHerrera uses her own vacation time for these trips, so it was a welcome reprieve at the end of the October training program to venture into the savannah for a day-long safari.

“Watching how peaceful and happy the baby elephants were in their natural environment made me wonder about the journey they’d taken to get there,” she said. “The beauty of that moment gave me some closure with the journey I’d just taken.”

A journey that, no doubt, left her breathless. 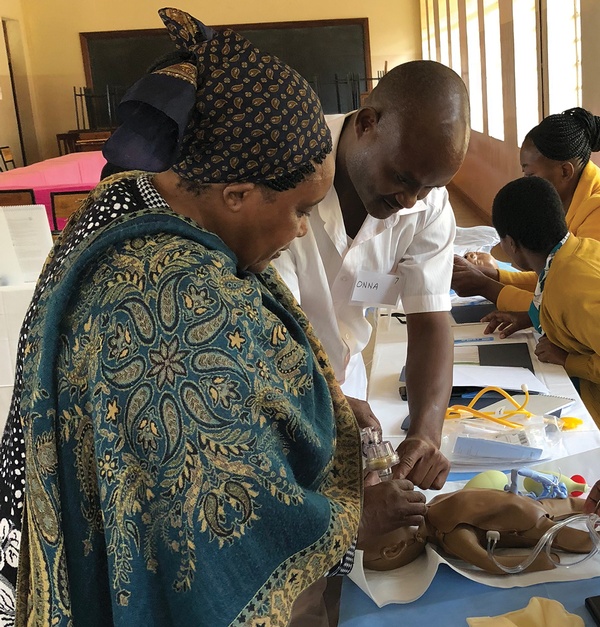 Providers get hands-on practice during a Helping Babies Breathe training at Dareda Hospital in Tanzania in October./ Courtesy photo.