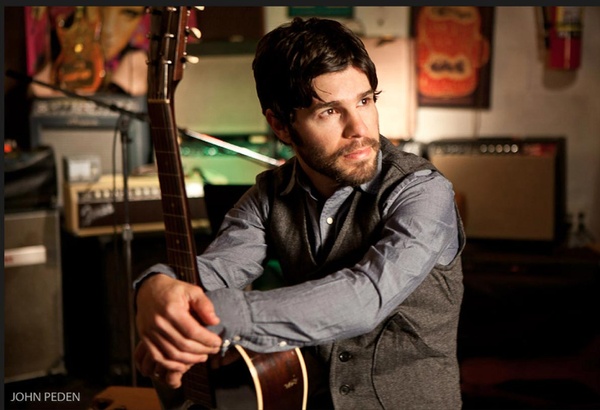 Singer/songrwiter Thoma Chacon, who moved to Durango from L.A. 10 years ago, is set to soon re- lease his fourth album, "Big as the Moon." He recently shot a video to accompany "Easy Heart," a track from the album, on the Animas River. When not slinging his guitar, Chacon works as a flyfishing guide./Photo by John Peden

In 2014, The Huffington Post/UK referred to Durango singer/song- writer Thom Chacon as “an Americana original; one of the most important songwriters of our time.” High praise indeed, and the statement reflects the opinion of a growing number of fans, both locally and abroad.

Yet another indication of his standing among elite musicians was his participation in 2015’s “Buy This Fracking Album” put out by Movement Music Records. Chacon’s track, “Before the Drilling Rigs Got Here,” shares billing on the album with the work of 20 artists, including such familiar names as Bonnie Raitt, Michael Franti and Pete Seeger.

Chacon’s poignant lyrics often lament the down-trodden working class and share common ground with the likes of Woody Guthrie, Bruce Springsteen, Kris Kristofferson and John Prine. His soulful, raspy voice combined with acoustic guitar and harmonica are reminiscent of Bob Dylan, a huge inspiration for him. In fact, Chacon’s infant son Dylan is named after the Noble Prize winner.

His earliest influences came from his family. The only boy in a family of five girls, Chacon says his sisters taught him to be sensitive and “how to pay attention to the details.”

On the other end of the spectrum, his second cousin Bobby Chacon (1951- 2016), was a two-time boxing world champion. The pugilist’s iconic life gave title to Thom’s first album, “Feather- weight Fighter,” which was recorded with Bob Dylan’s bassist Tony Garnier and drummer George Receli. The libretto on that album speaks of hope and healing; courage and glory. “(My cousin) taught me no matter how hard it gets, you’ve got to get up off the mat and keeping fighting,” remarked the singer.

Chacon spent his formative years in California but after chasing the dream in Los Angeles, he decided on a less frenzied lifestyle and moved to Durango 10 years ago. He met his wife, Bess, here, and has been a fly fishing guide for Duranglers almost since the day he set foot on the shores of the Animas River. He estimated that he logs about 70 guided trips per year. His love of the local waterway inspired “Easy Heart,” one of the tracks on his soon-to-be released fourth album, “Big as the Moon,” produced by his record label Pie Studios, of Glen Cove, N.Y.

To help promote the latest album and “Easy Heart,” Chacon recently enlisted the talent of New Mexico filmmaker Deborah Voorhees to shoot a video on the Animas River. Voorhees, an accomplished actress, teacher, filmmaker and writer, is also the creator of “Billy Shakespeare,” a 2014 comedy. (Go to voorheesfilms.com for a listing of her other credits and cinematic achievements.)

Voorhees took to the project after being introduced to Chacon though a mutual friend and hearing the singer’s rendition of “Easy Heart.”

“The song’s narrative reflects the essence of a quiet and gentle man; about being calm in the world,” she explains. “It’s a celebration of water, its importance in our lives, how we need it to survive.”

On a cool Sunday morning this fall after several days of rain, with the river finally clear and placid, Chacon slid two boats into the Animas. Voorhees filmed him and his faithful dog Delilah on the river with Thom’s music and lyrics as background. He even got to cast a line into the riffles and, being the accomplished guide that he is, hooked two trophy trout. Locals viewing the video will recognize much of the scenery on and off the water including Bakers Bridge, Smelter Rapid, the Strater Hotel and in homage to his fighting cousin, the Jack Dempsey mural outside the El Rancho Tavern. Voorhees acknowledged that she likes being able to film something different and this was the first time she caught a fly-fish-ing sequence on film. As it turns out, filming is the least time-consuming aspect of the video-making process. Weeks, and sometimes months, go into production, editing and synching, before the final product is completed.

As the result of all the great reviews received during Chacon’s European tour, the new album and video will have its premier release through an Italian distributor, Appaloosa Records. Chacon is optimistic that it will be introduced in the United States in early 2017.

The other nine tracks on “Big as the Moon” cover a range of emotions, and Chacon says the collection “sketches the lower middle class life of Americans and immigrants in the United States, past and present.”

In fact, astute fans will recognize the narrative of “I am an Immigrant,” which picks up the storyline of “Juarez,” a ballad of despair on his second self-titled album.

Local fans rarely have a chance to see Chacon in concert. His last was three years ago at the Concert Hall as the opening act for Los Lonely Boys and a short guest spot this summer at the Balcony Bar & Grill. He expects to have a record release party in Durango in March 2017 and noted that he will be playing the Walnut Room in Denver on Jan. 14.

Amongst the broad range of talented musicians who call Durango home, Thom Chacon is a treasured ambassador.

To learn more or listen to Thom Chacon, check out: www.thomchacon.com 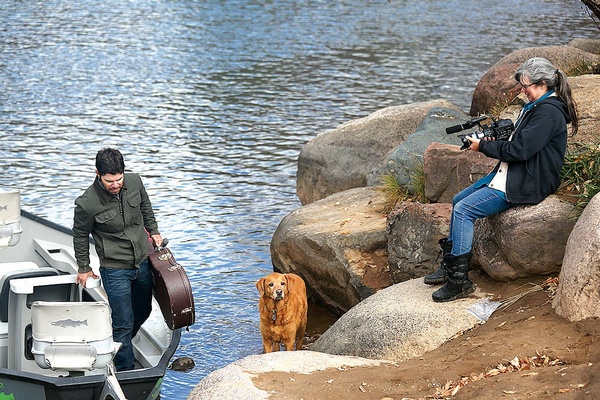 Chacon steps out of his drift boat on the Animas River with his dog, Delilah, while filmmaker Deborah Voorhees shoots video for "Easy Heart."/Photo by Jennaye Derge

“I’m rowin’ down the river deep and dark with a quiet mind and an easy heart.” – Thom Chacon