Embracing silence
Pitch perfect phenom Mandy Harvey hits all the right notes, on and off the stage 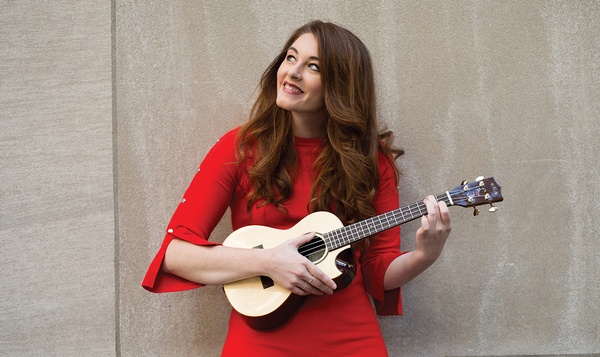 Imagine you are standing on stage, performing songs that you have written, back-up musicians playing alongside, and an appreciative audience applauding wildly. Thrilling to be sure, but what if you couldn’t hear any of it?

Although she has been totally deaf since the age of 18, Mandy Harvey, an “America’s Got Talent” runner-up (2017), has been winning over audiences around the world with her concerts and motivational speaking engagements.

On Tues., Oct. 16, Harvey will be at the Community Concert Hall playing ukulele and singing her own compositions of jazz, blues and pop in a voice that has been described as pitch perfect, according to an L.A. Times review. “From the first note, Mandy Harvey tames her audience into stunned appreciation as she glides pitch-perfect from breathy jazz standard to growling blues,” it read. “At show’s end, the audience is on its feet.”

Born 30 years ago in Cincinnati, one of four children, her family later moved to Florida and eventually Colorado. In 1998, she attended Twin Peaks Charter Academy in Longmont and gleefully entered singing competitions. At her high school graduation, she was named “Top Female Vocalist,” and with a dream to be a vocal music educator, she was accepted into Colorado State University. But it was not to be. Hard of hearing as a toddler, her audible range continued to deteriorate as the result of Ehlers-Danlos Syndrome, a rare disorder of the body’s connective tissue that can cause a defect in the middle ear. It eventually led to a complete hearing loss during her freshman year of college. Devastated, she dropped out of school.

“When I lost my hearing, I lost myself and my identity,” she remarked. “Waking up in the morning and facing the day was a struggle. One of the biggest successes I ever had was walking outside my front door while being deeply depressed.”

There have been a number of musicians through the years that faced physical challenges. Many composers and instrumentalists have been blind, and Beethoven, as most people know, became deaf, yet continued to write some of the world’s most beautiful music. But few, if any, singer/performers have been totally deaf. How, one might ask, did Harvey overcome such a loss?

The singer is gifted in many ways, not the least of which is in her optimism, inspiration and ability to accept what destiny handed her. Asked about her success, she defines it differently than most. “Success is measured in so many forms. I never would have been as comfortable singing in front of others had I not lost my hearing,” she said. “It’s a freeing experience to sing without being able to judge yourself. I was the worst critic of them all.”

At some point after moving back in with her parents, Harvey says she realized there was no value in focusing on things she couldn’t do. She started taking American sign language classes and got involved with the deaf community where, she explains, she found clear communication. “It was the first time I was in a room full of people who were all communicating, and I understood what was happening around me,” she said. “That gave me a lot of confidence to start re-evaluating my life.”

She took up singing lessons again from her former singing teacher and found that she could sing in perfect pitch. Ironically, she can’t hear her own voice but is able to stay in tune by singing through memory, sight reading, visual tuners and sensation. “You get different vibrations,” she explained. “Deeper ones hit in a different spot and they are thicker. And then lighter ones you can feel up higher and they kind of tingle.”

With a renewed confidence, she began to perform in small but well-known jazz venues in Colorado. She received high-praise from JazzTimes after her debut album, 2009’s “Smile,” was released, and is now working on her fourth.

The major break came after her dazzling performance on “America’s Got Talent,” which led to national exposure, other television appearances and a performance at the Kennedy Center. Harvey is an ambassador for “No Barriers” a nonprofit that helps people with disabilities overcome their obstacles. Her own inspiring story is chronicled in a book she wrote titled, Sensing the Rhythm – Finding My Voice in a World Without Sound.

In helping others to face loss and physical challenge the singer tells them, “If I take back any of the bumps, bruises or scrapes I’ve been through, I wouldn’t be the same person. This is going to be hard but you’re going to get through it, and you’re going to be better for it. Just keep going.”

Harvey’s tour schedule is international in scope, returning from Finland just last week, she has brought her music and inspirational speaking engagements to Canada, Sweden and the Bahamas this year. She is home on the Front Range roughly three days out of the month, “The rest of the time,” she says, “I’m happily busy making people smile.”

Prior to her performance at the Concert Hall, Harvey will offer a pre-show presentation from 5:30-6:15 p.m. that is free to the public. She will provide her inspirational story of never giving up, which she refers to as “Wisdom for Life.”

In her heart, Harvey is a singer/musician who just happens to be deaf. “Yes, it’s a part of me and who I am, but it’s not the entirety of who I am,” she acknowledged. “At the core, I’m a musician. I want people to value that part of me.”