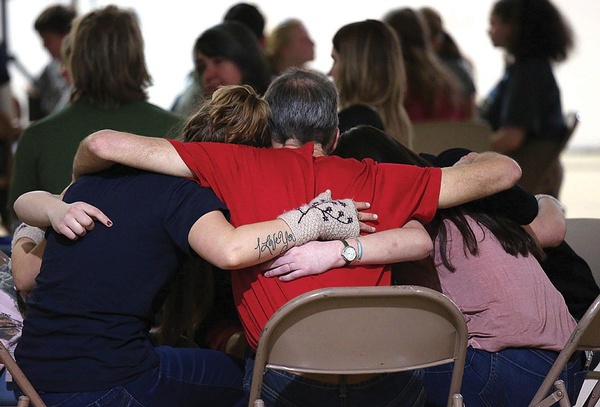 Participants at Bayfield Middle School's "Epic Day" partake in a group hug. Plans are to bring the event, a day of communication, leadership and relationship exercises, to other area schools./Photo by Jennaye Derge

Being a teen is never easy, and in today’s age of social media and cyber bullying, perhaps it’s never been harder to navigate those emotionally fraught years.

But one local organization is working to give middle and high school kids the tools to cope with these pressures and go from victim to “hero” – all in the name of stopping teen suicide.

The program, called “Epic Day,” was coordinated by community service nonprofit Tiospaye and the Hawaiian-based Hero Project with the goal of addressing recent teen suicides in the community. The program kicked off last month with an all-day event for Bayfield Middle School eighth-graders that included students, teachers and trained volunteers. The day’s events were designed to empower, advise and allow teens to share their experiences – all in the name of consciousness raising.

Although that term may have roots in the Age of Aquarius, the concept – open up, communicate and be compassionate – is perhaps even more relevant today than it was in the turbulent late ’60s.

According to the Centers for Disease Control, suicide is on the rise throughout the United States, increasing 24 percent between 1999-2014, the most recent year for which data was available. The pace was greatest after 2006 with females aged 10-14 among the fastest growing group. Suicide is the second-leading cause of death among 15- to 24-year-olds, and in 2014, 1,668 kids aged 13-18 took their own lives.

A consensus among professional counselors is that bullying via social media has driven many to such extremes. However, despite the grim statistics, the rise in suicide has also led to more prevention and counseling. One such program is the Hero Project, which was founded by former Durango resident and personal development coach Loren Lapow, who helped facilitate Epic Day at Bayfield. Since founding the Hero Project 20 years ago in Hawaii, Lapow, who holds a Master’s in Social Work, has been coaching adults, youth, families, communities, tribes and school districts on how to steer through life crises by transforming from victim to “hero.”

Tiospaye helped bring Lapow here for the inaugural event, which it hopes will be the first of many. The group was founded in 2014 through the shared vision of sisters Crystal Wolfchild and Monica Colvig, and their mother Della Romero. In the Dakota/Sioux languages, tiospaye means the “making of relatives,” a reference to a Native American worldview that everything is interconnected, according to Wolfchild. The mission of the nonprofit is to offer trainings to community members to help unite all in working toward the common good and change people’s pre-conceived notions and beliefs. In a little over a year, Tiospaye has graduated more than 200 people.

Now in its fourth round of leadership training, Tiospaye’s Community Service Project Captain David Mallin says each group determines its own community service project, with the most recent group deciding on the idea of Epic Day.

Because Tiospaye is a nonprofit staffed by volunteers, fundraising concerts were held earlier this year at the Powerhouse and Animas City Theatre to help pay for which is all about getting people to

Lapow’s travel to Durango as well as buy supplies and materials for the program. More fundraisers are planned to support the program in other schools this year, including Dolores Middle School and possibly Mountain Middle School.

On Bayfield’s Epic Day, a series of exercises and games were conducted aiming to give students an opportunity for candid, therapeutic expression. Some of the activities focused on relationship building to help teens deal with bullying and other factors that contribute to teen suicide.

As described on the Epic Day website, the programs are meant to help youth become leaders in their peer groups. The exercises and games allow students to express things that are bottled up inside, which can lead to stress, pain and suffering. “This work leads to break-throughs and new ways to respectfully treat themselves as well as others,” read the website.

Throughout the morning, students could be seen raising their hands in a signal called “shaka,” taught to them by Lapow. It is a Hawaiian native greeting meaning, “I see you” and “I honor you,” and Lapow also used it to ask for silence and attention.

Students seemed to enjoy using it to demonstrate their acceptance and agreement of what was being said, and in its own way, it became a unifier as well. The activity and enthusiasm in the gym that day was palpable. Students learned skills to cope with cyber bullying and other actions that can lead to feelings of isolation and hopelessness. They also learned how to use the “clearing process,” which allows them to apologize, relate and communicate in more productive ways.

The following day, teachers at the school noted the process spreading through the hallways, between classes, and into the entire student body. Hopeful as that is, the goal is to keep it going.

According to Mallin, plans are now to take the program to other area schools, and to eventually include seventh-graders as well as high school students. He said his group hopes to raise $100,000 to help facilitate these programs throughout the region.

For information about Tiospaye go to: www.makingrelatives.org. For the Hero Project go to: www.liveyourmyth.org