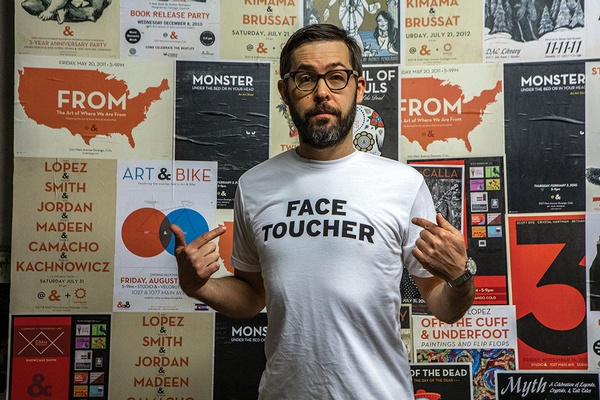 Tim Kapustka, co-founder of Studio &, stands next to some of his show posters from years past. He will be hosting a one-man retrospective show, "10 Years: The Posters of Studio & by Tim Kapustka," which opens this Friday. And yes, hand sanitizer will be made available./ Photo by Stephen Eginoire

Ten years ago, a bright-eyed and bushy-bearded graphic artist fresh on the scene in Durango, hoping to strike out on his own, was asked the mother of all questions by an intrepid local reporter: “Do you think it’ll work?”

The then 34-year-old artist was befuddled by the direct line of questioning.

“I don’t know how it can’t, because we have no idea what we’re trying to do,” the artist, Tim Kapustka (whose last name, coincidentally, has also befuddled many a local reporter) recalls saying.

Indeed, much like a painting or sculpture that takes shape over time, the experiment in local communal artistry that Kapustka helped found in 2010, known as Studio &, has evolved since its early days.

A Windy City corporate casualty of the 2008 recession, he had a loose idea for his new endeavor: gather five artists, including himself, and let them do their thing, on display to the public. Think of it as an artists’ petting zoo (although one should always ask consent before touching) where folks could chat with real,

That’s where the “&” in the name came from, explains Kapustka.

Today, Studio & is a linchpin in the local art scene – a clearinghouse of funky, unique and refreshing art. Where one can rub elbows with some of the great – and twisted – creative minds of Durango whilst buying everything from a “bull shit” tote bag to a sumptuous painting to a, well, “I’m-not-quite-sure-what-it-is-but-I-like it.”

And to help mark the occasion, Kapustka – who is currently partners with Elizabeth Kinahan, Jon Bailey, Shawn Lotze and Lorna Meaden – is hosting a solo show this month of all his posters for Studio & shows over the years. A show of shows, if you will. He has also published a book, 10 Years: The Posters of Studio & 2010-19, which contains all the posters, musings from several of his partners in crime and a shout-out to his favorite show of all time, “Barney Miller.” (“Some of the humor is out of bounds, but it completely stands up,” he noted.)

For Kapustka, the process of amassing all his show posters – an astonishing 105 out of 112 shows Studio & has hosted – was a humbling experience in and of itself.

“I generally tend to deflect praise, especially in my art, but going back through all this has been tremendously prideful,” he said. “I am proud of what Studio &, with all its partners, has become.”

In addition to the show and book, all of the posters will be sold as open editions – meaning you can buy as many as you want, to add to your Kapustka collection or start a new one. And if you can’t make it to the show or have a fear of crowds, Studio & is also launching an e-commerce page on its website, where one can order prints from the comfort of their own virus-free bunker.

“The big push for me is, I want people to have these in their homes, and I want the people who have been here for so much of it to have some of these,” he said.

Because, although Kapustka has been the one Studio & constant over the years, it has been home to a revolving cast of remarkable characters.

“It is absolutely necessary to make the point that it’s not me solely,” he said. “I’m just the only one who’s been here the whole time – kind of like being the bass player in a band – but that maybe speaks to my stubbornness.”

In fact, it is this artistic mash-up that just might be the secret sauce that has held the whole beautiful mess together. (Purely a euphemism, as anyone who’s seen Studio &’s impeccably curated displays or is privy to Kapustka’s pristine collection of vintage menswear knows.)

“Over the years, we just kept rolling. Artists would move on, and we’d vet new people that would bring a whole different mojo and talent set and awesomeness,” he said. “This has been the ultimate collaboration.”

Like any roommate type situation, though, he admits it wasn’t always great. Artists can be a finicky lot, hold on too tightly, and like wild animals, they spook. Finding that balancing point, between structure and freedom, has been a tenuous learning process.

“People would buy art and we’d say, ‘Hey, this is working,’ and we’d get a little nicer shirt and be open more consistently. We’d get a little more polished,” he said. “We are artists who have figured out how to be businesspeople, and that is not as straight of a line as it sounds.”

Also a learning process for Kapustka: being comfortable in his own artistic skin. When Studio & first started, he operated his design company, Cabbage Creative, out of a small corner. However, other than the show posters and work for clients, he rarely created what he would call “art.”

“I was a commercial artist,” he explained, working in vectors and pixels as some do in oil or acrylics.

However, soon after arriving, he was asked to participate in a show hosted by Studio & co-founder McCarson Jones.

“The first piece I did was on H1N1 and fear,” he said, with a touch of morbid nostalgia.

It would be a few more years, though, until he really began concentrating on making art – colorful, simple, clean designs that harken to his Midwestern childhood in the ’70s and ’80s.

“It wasn’t until year five that I started making art and illustrations just for art’s sake, and year seven was my first solo show,” he said. “Studio & was my incubator as an artist.”

And just as the Studio helped him come into his own, Kapustka would like to pay it forward to other local artists. He wants them to see Studio & as an “artists’ clubhouse.”

“It’s not just about the five of us, this is an arena for all artists in this community,” he said. “We take it seriously to help artists make it in this town. We went from being ‘punk’ and ‘dirty’ to, ‘Wow, we’re a cool, established gallery.’ Well, we were there. We just stumbled in the darkness and knocked a bunch of stuff off the wall. But we can put the light on and help other people not do that.”

And of course, Studio & always welcomes the public to come in, whether it is to quietly peruse the art, discuss the latest episode of “Curb Your Enthusiasm,” or just be.

“We want it to be a little oasis to get away from the effing news or the stock market or the virus,” he said. “People come in, and they’re having a shitty day and they’re like, ‘I love this place.’”

Looking ahead, Kapustka is excited for the next decade of &, which plans to kick it off with a big brouhaha “sideshow and freakshow” in June, followed by a yearlong celebration.

“With our current line up of partners, we’re gonna kill it,” he said. “We have so many good ideas, this is a new surge. I’m excited.”

Oh, and in answer to that reporter’s question – a reporter who just so happened to be the Telegraph’s dearly departed Stew Mosberg, who grew to be one of Studio &’s greatest cheerleaders.

To stay up to date on all the &-ppenings or to buy artwork or a book, go to anddurango.com. 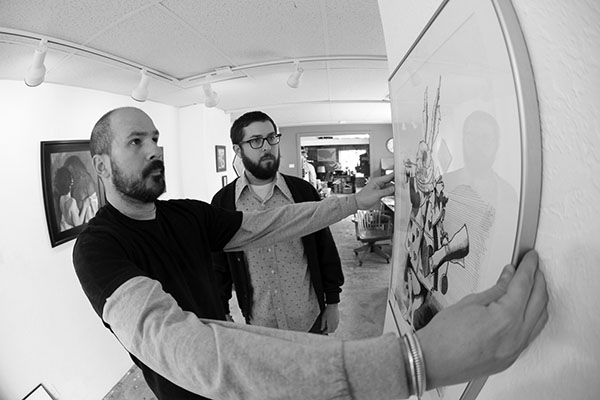 What: “10 Years: The Posters of Studio & by Tim Kapustka”