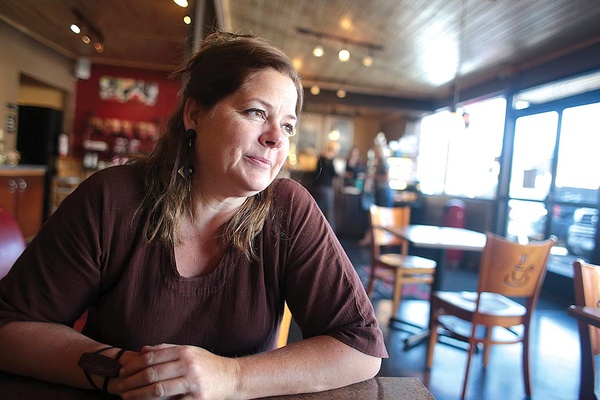 After five and a half years in a starring role at the Durango Arts Center, Theresa Carson has announced she will be leaving the organiztion Dec. 9. Carson, who has served as DAC Artistic Director and Theater Manager since 2012, will be moving on to a teaching position at Fort Lewis College.

“It isn’t without a touch of sadness; it’s more of a natural progression. I want to be clear,” she reassures. “I love DAC, but it’s time to pass the torch to someone else.”

Back in 2012, Sheri Rochford Figgs, then-DAC executive director, along with Board Advisor Terry Swan chose Carson to take charge of the theater. At the time, she was chair of the Department of Fine Arts at San Juan College in Farmington. Once ensconced at the DAC, Carson set a series of ambitious goals for herself. Among them was to build a youth and adult theatre program that incorporated a variety of components, including: dramatic and comedic improvisation; technical theatre, makeup, set and lighting design; and specialty areas such as Shakespeare and playwriting.

It is rare when someone who sets the bar so high can and does achieve success, but Carson did just that. During her time at DAC, she brought more experimental fare and adult-oriented plays to the stage including “Other Desert Cities,” “Fool for Love” and “God of Carnage.” She also staged a slew of audacious, complex musical productions, starting with “Beehive” and later, “Cabaret,” “Rent,” the recent “Rock of Ages,” and the upcoming “Annie Jr.,” which will somehow put 68 schoolchildren on stage. Moreover, attendance and submissions for DAC’s annual “10-Minute Play Festival” has continually grown, as has attendance in adult and children’s theater classes under her watch.

In explaining her reasons for leaving, Carson acknowledged that the Arts Center has always been supportive of her, as has the community, but the demands of the job left little time for life outside the theater. DAC, a nonprofit organization, is housed in an aging building with no room for expansion, nor the budget to add staff. Carson often pitched in to clean up backstage, in dressing rooms, and the theater itself, at times even bringing costumes home to launder. Yet, she never saw the added workload as drudgery because she loves the challenge. “I’m a generalist by nature,” she says. “Most of my artistic duties at DAC was within the theatre, although all staff at DAC pitches in for whatever is needed and supports all programs.”

Before her work at San Juan College, Carson, a Midwest native, was a

faculty member at Minnesota State University, Moorhead. She also had two adjunct stints at Fort Lewis College, from 2004-06 and 2014-present, the latter of which she managed during her time at the DAC. Now, she finds herself heading up the hill full-time to teach and lecture on subjects such as introduction to theater, directing and stage management.

Dennis Elkins’ exit as chair of the FLC Theater Department this past August moved the well-regarded Ginny Davis into the interim position. It was she who tapped Carson for a full-time lecturer/teaching spot starting next spring.

It appears to be a mutually beneficial arrangement. “(Carson) has been teaching classes for us for many years as an adjunct and has often directed for us, so she is not new to our department,” Davis says. “We value the expertise she brings to our students.”

Carson talks excitedly of being able to do classic plays by the likes of Bertolt Brecht, a German poet, playwright and director during the first part of the 20th Century. She will soon be casting and directing FLC students in Brecht’s play, “The Resistible Rise of Arturo Ui.” The character Arturi Ui is Brecht’s parable of an American gangster as the central character; more than that it is a commentary on Hitler’s mostly unopposed rise to power.

Energized by the prospect of delving into the works of playwrights such as Brecht and Chekov, Carson says, “There’s always time for me to learn. And Brecht is so appropriate for today’s world.”

Davis looks forward to the new works. “We have not staged Brecht before, but realize its importance in the education of our theatre students,” she says.

Despite her new job, Carson says she will remain emotionally and artistically connected to the DAC and hopes to guest direct and continue to be part of the community theater scene.

Her impact on actors, veterans and first-timers alike has been profound.

One such actor is Geoff Johnson, a familiar face to Durango audiences who recently appeared as Dennis in “Rock of Ages,” which was directed by Carson. He first worked with her at FLC in “Angels in America Part One,” when he was a student and she was the department costume designer, and again in “Part Two,” when she was the director.

“Theresa certainly has her own style,” he says. “She is very hands on from the start of rehearsal. A lot of directors will let things go on those first few rehearsals, but Theresa doesn’t want her actors to get used to those choices.” Yet, he adds, she is not heavy-handed with her suggestions. “Theresa just nudges you in the right direction,” he says.

Johnson also says Carson is not afraid to use different methods in the acting process. “Theresa approaches each play a little differently,” he says. Some shows, like “Angels in America,” employ dramaturgy, or the study of dramatic composition and the elements of drama, in order to tell the story on stage. Other shows, like “Plaza Suite,” require some “table work” beforehand, whereby the script is read and dissected by the actors to better understand it and its characters.

When learning about Carson’s plans to move on, the DAC put out a call for a new artistic director and has received 27 applications. Casting a new player in the role Carson epitomized will not be easy, but the foundation she is leaving is solid and well scripted. And DAC’s loss will the FLC’s gain, as students receive a superb opportunity to learn from a master practitioner.