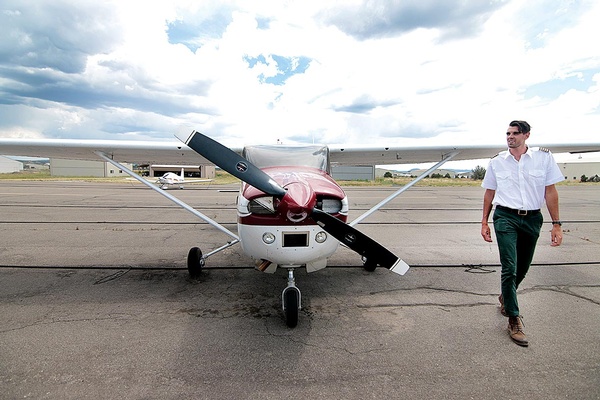 Owner of local scenic flight company Tall Pines Aviation, Max Wholey, prepares the Cessna 182 for an afternoon flight over the La Platas recently. Wholey, who is only 25 but spent his most of his life learning to fly, operates out of the Animas Airpark./Photo by Jennaye Derge

Perhaps sometimes all we need is a different perspective, and standing at 6’8” Max Wholey, owner of Tall Pines Aviation, understands that more than anyone. But it’s not just his height that sets this 25-year-old apart from the rest, but rather his passion for flying.

I met Wholey on a typical summer afternoon, where all morning it had been blue skies and sunny but the second I parked my car at the Animas Airpark, the threat of rain loomed. Max seemed unfazed and welcomed me to the airpark where he has spent innumerable hours flying, getting certifications and now running the small flight-touring business.

It began one day when he was 10 years old in Pennsylvania, where Wholey had grown up. His dad decided to take him to the airport “just as something to do.” They took a discovery flight, which is meant to introduce anyone interested in aviation to the potential of flying, and that is where he fell in love.

After graduating high school, Wholey moved to Minnesota where he began to pursue aviation as a living.

He obtained his private pilot’s license when he was 18 before coming to Durango to start college at Fort Lewis. He spent summers and free time working on getting his commercial license, which allows him to take paying passengers, and also earned his instrument ratings, which gives him additional instruction and qualifications to fly in inclement weather.

When he was done taking all the FCAA certifications he wanted, he took a full time job as a skydiving pilot, where he flew jumpers for about a year and a half in areas around Albuquerque.

After a while though, he saw a niche in Durango in need of filling.

“Some people are really interested in flying, and some just want to take pictures,” he said of the varied interests of his clients.

On that summer day that Wholey bravely flew over the La Platas, I was just there for the pictures, but Wholey had a way of piquing my interest in flying as well. As we loaded into the Cessna 182 – a small private plane that seats two in the front (pilot included), two on a bench behind and a couple small bags in the back – and buckled our seat belts and secured our headsets, he explained to me the physics of flying. As we took off, Wholey pointed out many of the buttons, triggers and gauges on the panel and what they’re used for.

“That’s the best part of flying for me is the initial five seconds after lifting off the ground because it seems like it shouldn’t be possible ... but everything is working together,” he said.

I nodded my head in agreement as we took off into a slightly stormy sky. I pointed to the dark storm cloud and asked him calmly if he thought it was anything to worry about.

He assuaged my nerves by going through the rules of visibility, saying a lot of numbers and terms I couldn’t understand, but that he knows what he’s doing, and I’m in safe hands.

“I’ve had a lot of training,” he said. “When I first came out here, the first thing I did was take a mountain flying course, which is different than any other course.”

Among other things, the course teaches about crosswinds coming off the mountains and through valleys and how to compensate for these erratic winds.

“You have to read the winds,” Wholey said, “before you take off and then while you’re flying.”

After he’d taught me a mini course in gusts, knots

and G forces, I could finally relax and enjoy the view.

Making a big loop around the La Platas, Wholey pointed out various peaks and points of interest, ones I’d seen from the ground, but never from above.

“It’s such a great place to fly. It’s amazing,” Wholey said. It seems, to him, to never get old, no matter how many times he’s flown over the area. “Winter is awesome, summer, fall is the best in my opinion, the sides of the mountains light up with gold aspens, it’s super cool.”

On a past flight, Wholey even saw a group of mountain goats running along a mountainside. I cross my fingers to see one, but no luck.

We circled back toward town as the sky cleared and the sun came out. He even let me take the steering wheel, or “yoke,” and drive the plane for a second. He promised I couldn’t do anything dangerous, and there’s a dozen backup options in case something happens. He obviously doesn’t know me at all.

Soon we passed back over Durango and the river glistened as we flew close over town. He pointed out all the key attractions along the way and dared me to find my house, which I did, and when I think I can see my neighbor’s car parked out front, I get way too excited.

When I realized we were getting close to the Airpark, I became overwhelmingly disappointed. I felt like a small child and wanted to clamp my hands and yell, “More! More!” But, of course, I’m a grown adult so I held my tongue and accepted that it was the end.

“I love introducing people to aviation” he said. “My passion is flying, so I just want to show people how awesome it is and how awesome flying in the mountains is. I like seeing new people getting engaged in it”

His ultimate goal is to eventually make his flying meaningful and help people. His heart lies in Africa where he spent times last spring and would like to someday live there and fly for a humanitarian cause.

Until then, though, he loves Durango, meeting new people and taking them on adventures through the sky. 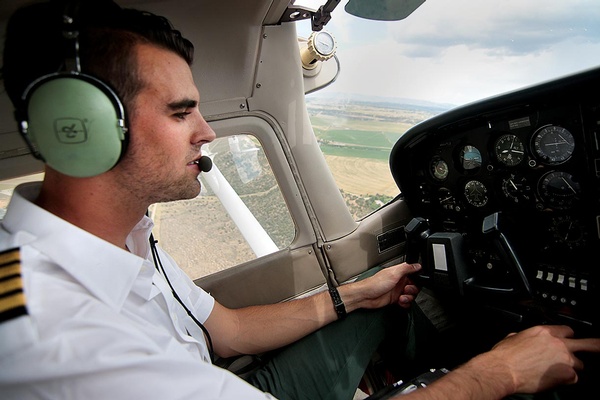 Wholey at the controls. He obtained his pilot's license when he was 18./Photo by Jennaye Derge 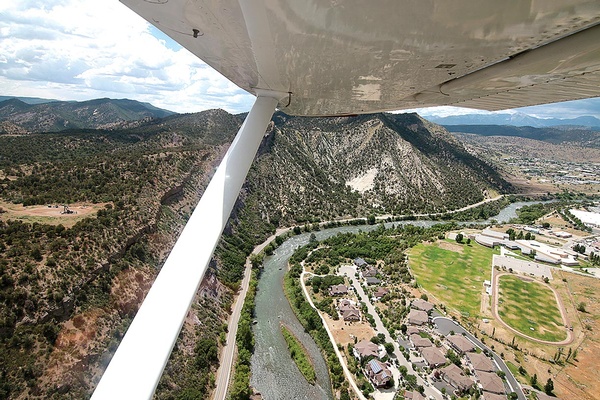 A view of the south end of Durango and the Animas River from a Cessna 182 ./Photo by Jennaye Derge