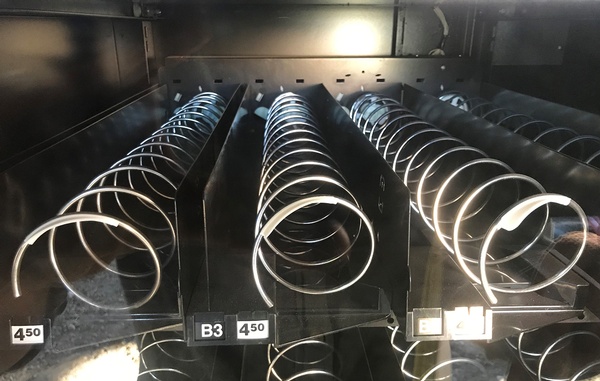 One of the Mancos Creative District's new art vending machines awaits its cargo. The spirals are rented out by artists who get to keep 100 percent of the proceeds from their sales.

Hungry for art in this socially distanced time of COVID? Mancos artist Alex Bond has the solution: art vending machines.

That’s right. Step up, insert your money, punch in your selection and out pops a mini piece of art of your choosing. No direct contact required (although some hand sanitizer might be nice.)

“It captures the way people are now,” Bond said Tuesday from a smoky Mancos. “People are still craving art, but now you don’t have to crowd around to get it.”

The idea behind the vending machines was a bit serendipitous – much like when two bags of chips instead of one drop from the spiral. See, a few months back, before all this pandemic business began, Bond, who is a sculptor, was shopping his wares at a Durango gallery. But, he got a chilly reception.

“The curator looked over my portfolio for about four seconds with pursed lips and a low brow and said, ‘Sorry – this business is not for everybody,’” he recalled. When he pressed for specific feedback, the curator sat down and began calmly making phone calls, ignoring his request.

Bond – who is also a board member for the Mancos Creative District – talked to other artists and found he wasn’t alone.

“It’s a bummer; it’s really hard to get in anywhere,” he said. “There’s so many people who want to sell their art, but they can’t. Yes, it’s about making money, but it’s also about making a connection and sharing creativity.”

The proverbial spirals started turning – and then COVID hit. Galleries, and pretty much all other life as we know it, shut down. But Bond didn’t pull the plug on his idea.

“I thought, ‘how do we make this work?’” he said. The idea of art vending machines had been bouncing around in his head for a while, ever since he had seen it at Santa Fe’s venerable Meow Wolf and a few other places.

“It promoted this rebellious nature of art while allowing for the connection to occur,” he said.

He floated the idea to the Mancos Creative District, which agreed to give him grant money to procure the machines. A little time on Craigslist and a quick trip to Flagstaff, and two decommissioned snack dispensers were all his.

Since then, he’s been busy finding other artists to help refurbish the machines and renting out the spirals ($3 for a small, $5 for a large.) He said response from the art community has been strong, and most of the spirals are already spoken for. “Ninety-nine percent of people’s art fits perfectly,” he said, noting that the spirals are especially conducive to jewelry, stickers, coasters, hooks and the like.

“You want it to be small but something that will still catch people’s eye,” he said.

The goal is to also make the art affordable, with items ranging from $5 - $35 (credit cards currently are not accepted but are in the works.) Plans call to place the machines – once finished later this week – outside at Fahrenheit Coffee and Fenceline Ciders. “It’s meant to be symbiotic. The businesses help us out, and hopefully the machines will draw more people to their businesses.”

The machines will be accessible anytime to anyone, from the “5 a.m. dog walker” to happy hour walk-tailers. “People can go anytime, and it’s a no-contact situation,” he said.

Bond is also using the machines to teach the next generation of artists. Through a class he is offering at the Artists of Mancos coop, he will be taking high school kids through the entire process of creating carved wooden spoons to be sold in the machines.

“From harvesting the wood themselves to carving the spoons, they’ll learn they can actually make money with their hands,” he said.

And for the rest of us? We’ll be able to have our art, and eat with it, too.

Teens interested in Bond’s woodworking shop can email him at: alexandervinogradovbond@gmail.com. 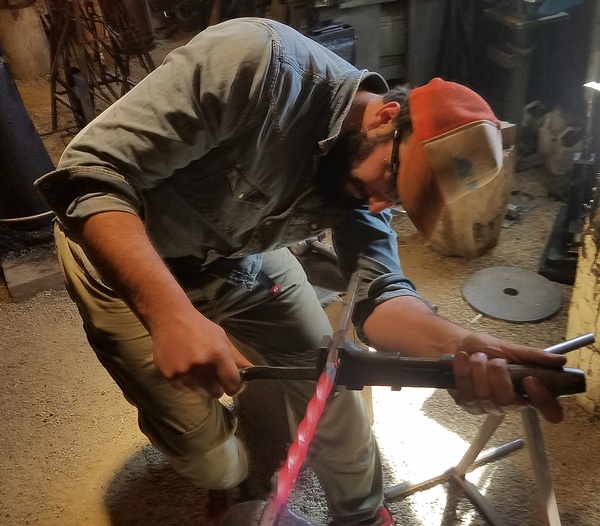 Mancos artist Alex Bond, the brains behind the vending machine idea, works on one of his sculptures in his shop. / Photos courtesy Alex Bond