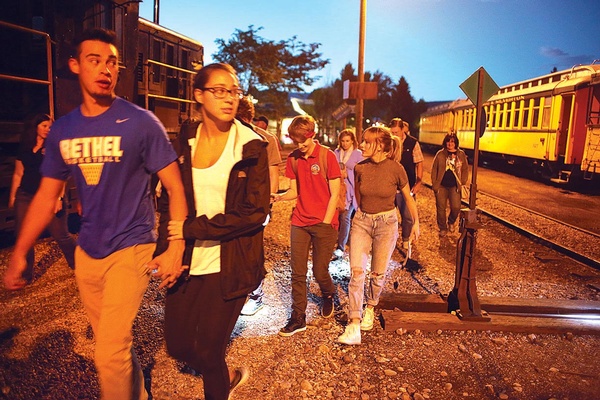 Participants at the inaugural D&SNGRR Ghost Crawl look slightly on edge as they head through the yard to the museum. That's the haunt (literally) of Kate, aka "The Lady in White."/Photo by Jennaye Derge

The full moon hadn’t quite risen yet, so I skulked around the rail yard with my flashlight. It helped me pick my step over train tracks and coal scraps, but it wouldn’t help me pick out any ghosts. This wasn’t pure speculation on my part – after all, ghosts were definitely skulking about. They lured me here in the first place.

The only reason I didn’t get arrested for ghost-hunting (and trespassing) was that I was lurking on legitimate business. I was there as a participant in the first ever Full Moon Ghost Crawl, a new experience offered by the Durango & Silverton Narrow Gauge Railroad.

“A lot of people come into the museum,” Jeff Ellingson, the train museum curator, said after the inaugural crawl. “I’ve been telling stories like this for years. Ghost tours seem to be gaining in popularity all over. People take them in Europe and New Orleans and Seattle. People like mystery. They like stories like this.”

Trains and storytelling do seem to be made for each other – perhaps telling stories was the only thing to do on long trips before the advent of in-flight movies, headphones and other ways to avoid talking to people. Most of the train museum volunteers will gladly spin a yarn for you, if only you ask. It was Ellingson’s idea to compile these stories into a tour, and the railroad had him run wild with it.

The curator spent just over an hour leading the 30-person tour from the depot around the rail yard, including a stop in the car shop, a pass around the turntable, a peek into the roundhouse (where the engines smolder like sleeping dragons) and into the museum. One of the treats for locals – and there are plenty throughout the tour – is spying on the nighttime workings of the railroad.

Along the way, he dispensed from his deep knowledge of the railroad’s history... and its victims. For lest you forget, this is a ghost crawl, and many of the railroad’s ectoplasmic residents met untimely and gruesome deaths. There’s Legs (who has none); there’s the bluegrass party crasher (with photo evidence); and then there’s Kate, the teen-age prostitute, aka the Lady in White. Her story steals the show, and you may even see her if she decides to show up.

“Kate actually showed herself to Pam the other day,” Ellingson said, referring to one of the museum security guards. “Pam came in and was walking through the museum and heard something on the other end of the museum by the immigrant (sleeper) car. She looked and there was a woman standing on the stairs of the car. She froze. She called for backup. She got more people down there, and she never took her eyes off the lady. They just stood there and looked at each other until more people came. And then the lady went into the car, and they all followed and searched. And there was no one there.”

The curator swears he did not believe in ghosts before working at the railroad, nor for most of the years he’s been there. “But after being here for 33 years, I know something’s got to be going on,” he said. “There’s just too many. We can’t all be crazy.”

He said that he was converted to a believer by the photographs that people started snapping on their cell phones. He pointed to the infamous one of the ghost caught on stage during the Bluegrass Meltdown – the picture is currently on the railroad’s website page for the ghost crawl – and you’d be pretty hard pressed to pass it off as dust on the lens or a trick of the light.

Ellingson spilled these stories of security guards and mysterious photographs after the main event, when
only a few stragglers and intrepid reporters were lingering around the depot. The official tour would benefit from a few more first-person accounts like this, which would really complement the historical story-telling (Ellingson’s clear specialty). The up-coming ghost crawls may well build on the drama and suspense of this initial installation; Ellingson stressed that they were testing out the format on this first run.

“It’s an experiment,” Al Harper, owner of the railroad and CEO of American Heritage Railways, added. “We just want to see if there’s interest. I just see several things we could do to put people in the right frame of mind to take a ghost tour.”

Of course, I needed to know if Harper has experienced any of the railroad’s ghosts himself. “I have not,” he admitted frankly. “They say you have to be kind of connected emotionally to make it happen. I guess I’m not connected.”
In this case, not seeing is still believing, as Harper sounded fully into the experience. He even asked his own question about the Lady in White. And the spirit has undeniably moved him to progress with new

ideas for the railroad. “It’s not that it’s a money maker, because you can’t do enough people to do the volume,” Harper said of the ghost crawl. “It’s more the exposure of the railroad constantly in the community, always doing something new and different. We always want to be the leaders in tourism here, so we’re always looking for something different to do, a different idea. This was all Jeff’s idea, the ghost crawl, and he did a good job.”

I’m here to tell you, as a Durango resident, that the ghost crawl was not simply – or even ideally – for tourists. I know we locals have a bit of a complicated relationship with the train. Some of us still get giddy when we hear the whistle; others grumble until the coal dust settles. Either way, the train is a fact of life for those living here. But less mundane, and much less known, are the stories that still haunt this town.

And if this ghost crawl did one thing supremely well, it dished out the stories straight. There was no fog machine, no strobe light, no piped-in sound effects, no bedsheets with eyeholes. Some people might crave such a glammed-up production. I much preferred hearing the personal stories. As for ambiance? Well, try beating a railyard in the full moonlight. It had us hooked. Even if, in the end, we didn’t spot any poltergeists.

“I enjoyed the enthusiasm,” Ellingson said. “We’ll polish it up, and next full moon we’ll do it again.” 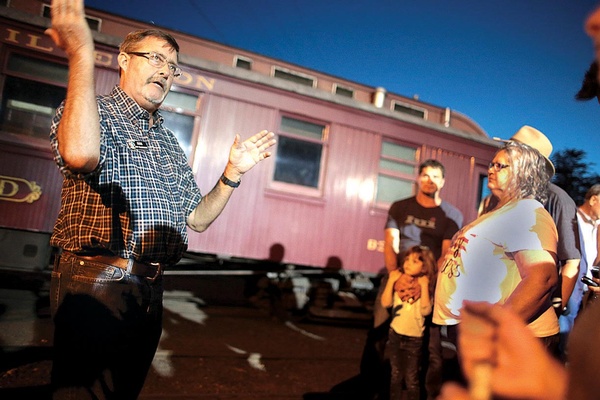 Jeff Ellingson, the train museum curator, talks to a crowd of about 30 during his inaugural tour in August./Photo by Jennaye Derge 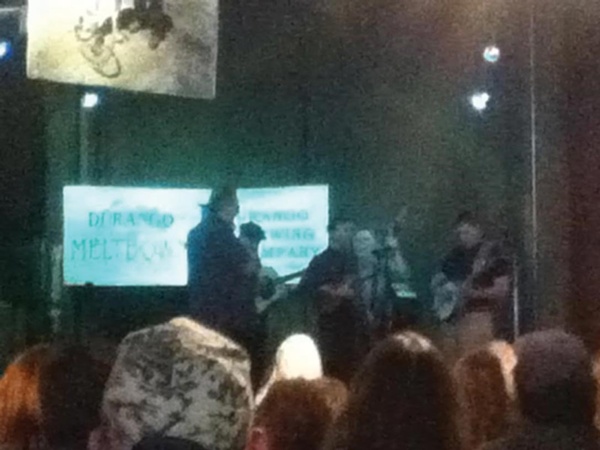 *Tours are for mature audiences due to grisly talk of death, dismemberment and prostitution. (OK, we know there’s a kid in the photo, just in this writer’s estimation.)