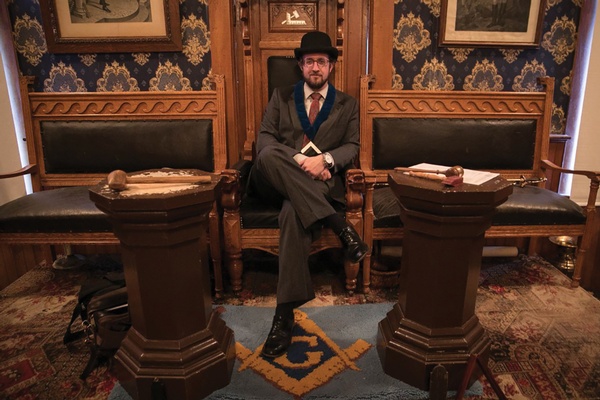 Patrick Dey, the Worshipful Master of Nevada Lodge #4 in Nevadaville, sits inside the lodge, which was built in the 1870s during the mostly- abandoned town's heyday./ Hart Van Denburg, CPR News

If you take exit 243 off Interstate 70, you’re most likely headed for the glittery casinos of Central City and Black Hawk. But make a wrong turn on your way up the mountain, and you may end up in a ghost town.

In the 1800s, the mountain hamlet of Nevadaville bustled with gold miners. Today, only a few buildings stand, relics of the Old West version of our state that’s hard to find anymore. An old trading post, a saloon and a tiny town hall dot the dusty main drag.

Once a month, they converge upon Nevadaville to practice their rituals in a building built by brothers from another time.

Freemasonry – also called Masonry – is a practice rooted in medieval stonemason fraternities. Meetings may involve mundane business like budget discussions and event planning, but what captivates outsiders are the confidential ceremonies and ritualistic initiations of new brothers. This secrecy has spawned myriad conspiracy theories, enhanced by popular fiction like Dan Brown’s The Lost Symbol.

There are just under 2 million Masons in America. The basic unit of Masonry is the Lodge, which is what the group that meets in Nevadaville is called: Nevada Lodge #4.

Colorado’s only ghost town lodge was built in the 1870s. It’s still around today thanks to the efforts of Masons through the decades to preserve this piece of history. The lodge meeting room still possesses the original wallpaper and wainscoting, according to Patrick Dey, Worshipful Master of Nevada Lodge #4. (The lofty sounding title basically means he’s the current elected leader of the group.)

Dey says the lodge room in Nevadaville has impressed many an outsider, including members of other lodges who come to the ghost town for initiation. Typically, pledges are led in blindfolded, and “when it comes off ... I always hear them go, ‘wow.’ Just to be in that room during that is such an experience.”

For Nevadaville miners in the late 1800s, Masonic membership was something to aspire to. Back then, Dey says dues were $4 a year. The average miner made $1 a week, so that constituted a month’s wages.

Being a lodge member gave a man wealth and status, as well as an assurance that his brethren would help pay for medical needs or after-death expenses. Think of it as Old West health  and life insurance.

Brothers still help each other monetarily as needed, but Dey says the main draw now is old-fashioned, face-to-face connection – something hard to find in the digital age.

“Up here in Nevadaville, we don’t get good cell phone reception, so you don’t have to worry about guys sitting there playing on their phones in lodge,” Dey says. “So hang out, enjoy yourself. You’re in a ghost town!”

An architectural designer by day, Dey is obviously passionate about the preservation of the building. He and his brothers come up frequently to do restoration work. Sometimes, when they stay late, they’ll sleep overnight in the old building. To him, it feels like communing with the past.

The Masons of Nevadaville love to show off their lodge. They hold an annual pancake breakfast that’s open to the public, and they welcome visits from other lodge members. But they’re protective of it, too.

Dey says there have been break-ins and looting in the past, but people  should be aware that Nevadaville is not truly abandoned. Two people live in the town year-round, and there are many like him who visit frequently, he notes. On nights like Halloween, when trespassing is more likely, the Masons even have lookouts to make sure their property remains safe. 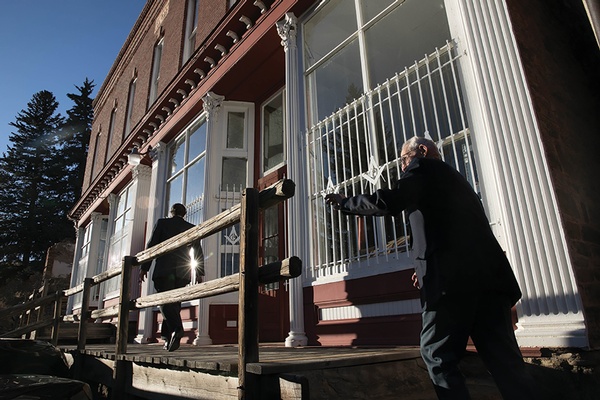 Roy Weingarten, a past Master of Nevada Lodge #4, enters what's known as Colorado's only ghost town Freemason Lodge. It's still around today thanks to efforts of Masons through the decades to preserve its history, including the original wallpaper and wainscoting./ Hart Van Denburg, CPR News