Glass half empty
M. Night Shyamalan delivers a turd, and 'Serenity' gets lost 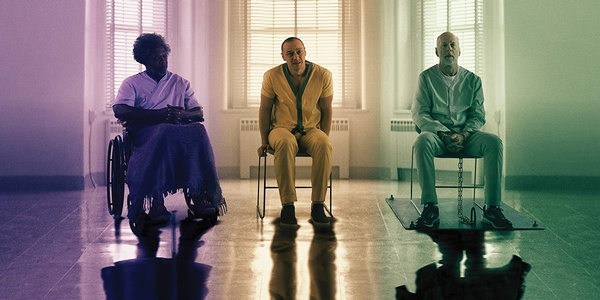 ackson, McAvoy and Willis in "Glass," M. Night Shyamalan's latest, which attempts to pick up where "Unbreakable" left off 19 years ago.

After a brief respite into surprisingly respectable genre exercises, M. Night Shyamalan is back to making godawful movies.

“Glass” is the third in a trilogy (let’s hope it’s just a trilogy) of superhero movies from Shyamalan, starting with “Unbreakable” in 2000, then continuing, surprisingly, with “Split” in 2016. I didn’t like “Unbreakable” – it was terminally slow – but I found ‘Split” entertaining, though pretty thin. Mostly, it was fun to watch James McAvoy cycle through 27 different personalities, much in the same way it’s fun to watch Rob Brydon do 27 different celebrity impressions. It doesn’t have anything to do with real-life disassociative identity disorder, or really anything else in reality, but I’m mostly OK with that, given it’s a superhero movie.

“Glass” picks up the 19-year-old storyline from “Unbreakable” as if that movie was released last year, which right off the bat speaks to Shyamalan’s arrogance. Does he really think that many of us, or any of us, have seen that movie recently enough to remember anything more than the most basic elements of it? He directs like he does. It took me a while to re-familiarize myself with the Bruce Willis character, to remember what he can and can’t do, etc. But that’s OK, because if there’s anything “Glass” has in abundance, it’s time. This film moves like frozen molasses.

McAvoy’s character, who is actually listed in the credits with 27 different names (because Shyamalan hates people who write about movies and wants to make our lives as difficult as possible) has kidnapped another group of teen-age girls, but David (Bruce Willis) manages to rescue them before the Beast emerges. During the rescue attempt, however, they are both captured by the police, who turn them over to Dr. Ellie Staple, a psychologist who specializes in convincing people that they’re completely mediocre.

Of course, they break out, and engage in the most anticlimactic, dull and boring superhero battle in the history of superhero movies. For instance: “Split’s” signature move is a bear hug. Boy, is that exciting to  watch. Bruce Willis, meanwhile, delivers the same kind of “I’m still making movies because I owe somebody money” performance he’s been delivering for a decade. He looks almost as bored onscreen as we’re feeling in the theater.

Of course, there are twists, though they’re not very interesting, and, in signature Shyamalan style, tend to take away from the story more than they add to it.

But I’m still not supposed to write about them, because spoilers. But I will say this: Shyamalan gets in a dig at critics, and it’s similar to the one in “The Lady in the Water.” He seems deeply convinced that there are scores of people determined to celebrate mediocrity and persecute gifted people. It’s not true, Mr. M. Night. We just hate bad movies. Here’s an idea: make your next movie about a guy who is absolutely ungifted, regularly delivers turds he’s convinced are jewels and develops a paranoid theory about a secret society determined to thwart his giftedness and creativity. I even have a name for it: call it “Night.”

Speaking of twists that take away from the story, “Serenity” is a perfectly fine movie until its big twist propels it into increasingly weird and troubling territory. It stars Matthew McConaughey as a salty fisherman going broke in a small island town, possibly somewhere in the Florida Keys. He goes by Baker Dill, though we soon learn that’s not his real name, and he  has a past he’s running from. Dill, with the help of first mate Duke (Djimon Hounsou,) obsessively hunts a monster tuna that always manages to slip the hook.

Then, one night, a figure from Dill’s shadowy past (Anne Hathaway) shows up at the only bar in town, calling him John. This is Karen, and it is revealed that they have a son together, but also that she is now married to a powerful and violent man with mob connections (Jason Clarke.) She is desperate to get away from him, but also terrified of his power and connections. Karen has planned a “romantic” fishing getaway for the two of them, and he is due to arrive on the island the next day. Aboard Baker Dill’s fishing boat in the middle of a rainstorm, she offers him a huge amount of money to take her violent husband out fishing – and feed him to the sharks. At first, Dill refuses, but you can sense that it’s just a matter of time before he gives in.

At this point, “Serenity” is an enjoyable yarn, sort of a fishing noir. Hathaway’s clearly having fun as the femme fatale, and McConaughey, as always, looks better with his shirt off. Director Steven Knight manages the tone and mood just right for this sort of thing; it’s slightly hyper-realized and deliciously moody. It has the feel of an Elmore Leonard or Dennis Lehane novel. Diane Lane is gorgeous as Baker Dill’s island squeeze, warning him about the dangers of this mysterious woman from his past. I would have been perfectly happy to watch things spool themselves out along genre lines; Dill takes the job, something goes awry, Karen double crosses him, he survives by his wits and luck, etc.

But Knight has something far too clever and clunky up his sleeve, and it soon becomes apparent that things are not as they seem. Serenity takes a left turn away from noir and becomes something akin to “Ready Player One” or “The Matrix.” Those are both movies I enjoyed, and so I wouldn’t say that “Serenity” goes off the rails, exactly. But it does become a lesser movie as the result of its ambition; there are all kinds of problems with the new premise, plenty of unanswered questions and troublesome possibilities. It’s not a graceful changing of gears, and it left me wishing that “Serenity” had just coasted along the direction it was going, instead of trying so hard to be something different and interesting.