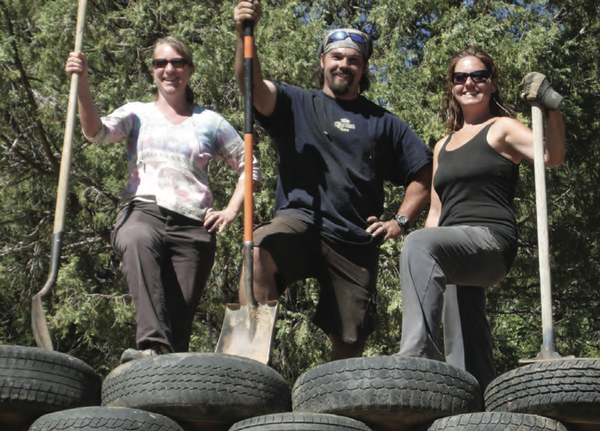 Kristina Munroe, left, and friends Mike and Christy Muir re-enact the cover photo from "Garbage Warriors," a documentary on Mike Reynolds, of Taos earthship fame. Munroe accomplished a similar feat with her Twisted Oak home in Durango and helps others do the same with her eponymous book./Courtesy photo

Starved for green after a brown winter, I melted when I walked into Kristina Munroe’s indoor jungle garden at her home 5 miles west of Durango. A rubber tree stretched massive leaves toward the sun, red flowers poked through vines, and the air felt fresh and balmy. A cat lounged on the sill of a south-facing window. Paradise found. In a living room.

I’d written about Twisted Oak, Munroe’s off-the-grid, solar-powered, rain-harvesting, organically inspired abode, last year for a solar home tour article. Chatting with her then, I could hear in her voice the breadth of what it took to build this oasis-in-the-pines from the ground up.

My first question during that interview was asking her what motivated her to take on the mammoth-sized task of building a self-sustaining house. She laughed, saying it would take a whole book for that story. “A book I hope you’re writing,” I playfully challenged, before moving on to more manageable newspaper-article-sized questions.

I’d forgotten that exchange, but Munroe reminded me the other day after handing me a copy of her newly released memoir, Twisted Oak: A Journey to Create a Self-Sustaining Life and Home. The woman is a superhero: she built a house and wrote a whole book, replete with tips on how to tame thermodynamics, create an indoor greywater garden and embrace the humanure composting system.

The book is as approachable as Munroe, offering a glimpse into her humble journey that begins, as all brave tales do, “on a dark and stormy night.”

A mix between a narrative and reference book, Twisted Oak empowers both architects and idealistic pioneers alike to keep seeking a more sustainable way of life.

“I want to break the stigma of the image of homesteading as hauling water and chopping firewood,” she says. “You can still be connected to the community and live a comfortable lifestyle with all of the conveniences of a modern home.”

She’s not just a hippy rolling doobies in a patch of patchouli either. A fifth-generation Durangoan, Munroe graduated valedictorian of the DHS Class of ‘83 before earning a civil engineering degree with emphasis in structural design

and analysis from Boston’s Northeastern University. She went on to work with the Navy as an architect and, later, with Boeing Co. on the design of the 777. Other “smaller” projects, like building bridges and marine structures, pack the gaps of her resume.

In 1999, she turned her focus to residential projects, namely building “Mac-mansions” in Seattle. A decade later, she’d lost steam designing houses filled with so much wasted space. She dreamed of living in a home that reflected form and function, and a life that worked with nature, syncing with the rhythms of the seasons and climate (which might also include the perks of no mortgage or utility bills).

Though she’d spent the majority of her life pursuing “tangible, calculable things,” Munroe knew that the most amazing experiences happened by taking a leap of faith. So, in 2010, the single mom of two moved back to Southwest Colorado to turn a pipe dream into reality.

“It was easy to proclaim following the heart, but going through with it is something not readily accepted in our culture,” she writes. “Heartfelt decisions work well in love affairs and choosing a new kitten, but utilizing feelings and intuition in a decision that would ultimately uproot my family, my home, my finances and my entire way of life was something entirely different.”

First things first. She acquired 36 acres, the amount required by the county to qualify for a well, and hired an excavator to clear a plot of land framed by ponderosas and a cluster of twisted oaks. She drew up plans for a 1,400-square-foot home and then solicited the moral support and savvy of builder/carpenter Mike Muir, owner of Muir Construction.

During the 18-month construction process, Munroe homeschooled her nine-and 11-year-old sons, Andy and Austin, embracing the opportunity as “a really cool school project.” The boys would help out in the piecing together of their future home, something few Americans, much less kids, have any idea about.

And, while most people couldn’t describe the materials shaping their homes, Munroe and her boys could tell you exactly what Twisted Oak’s walls are made of, considering they personally helped stack 13 rows of recycled tire, tallying nearly 800 tires. The tire wall contours the home, the ends merging with the ground, forming soft curves and making the structure seem like something grown straight from the earth.

Within each of the tires stacked, the family placed tiny cornerstones found around the property. Using magic markers, they scribbled words and symbols they thought should define their lives: earth, air, fire, water, memories, joy, love and other less fluffy sentiments, like inside jokes and spontaneous doodles.

Intentional details, like the cornerstones, define Munroe’s meticulous approach to Twisted Oak. A hobbit door, for instance, serves as the entry, but it also opens perfectly to cross-ventilating breezes on hot, summer days. For more on these kind of technical aspects, like the water catchment and passive solar systems and inner workings of the “throne room,” you’ll have to check out the book. In short, she’s basically built the ultimate sofa-cushion, living-room fort that’ll withstand harsh winter winds, pouring rain and blazing heat.

For the whimsical side of Twisted Oak, you have to see it for yourself: gorgeous aspen ceilings, knotty-pine cabinets found at a garage sale painted in Seussical colors, natural wood countertops and adobe bricks forming castle crenellations above the claw-foot bathtub. There’s even a wall off the east end of the house framed from empty cans, including Ska Pinstripe, Munroe’s personal favorite.

There are no fans or mechanical systems shutting on and off, so the quiet hangs like a cozy blanket, a calming sense enhanced by diffused light introduced through bottle art scattered throughout the house. Munroe became quite the glass-bottle connoisseur in the process, acquiring a deep appreciation for glittering Sapphire Gin bottles, green square-shaped olive oil bottles, a stunning mandarin orange vodka bottle and crystal-clear Mike’s Hard Lemonade bottles, her go-to refreshment after arduous days building the tire wall. “Now when I see bottles, I look at them in a completely different way,” says Munroe. “I look to see what they look like from the bottom and wonder if they would make a unique bottle brick.”

For folks intrigued by quirky bottle art projects or those who want to incorporate any or all aspects of Twisted Oak’s pro-foundly simple logic, Munroe founded Twisted Oak Consulting, an engineering practice that offers expertise in building, buying or modifying homes to celebrate sustainable awareness.

“The goal isn’t to duplicate Twisted Oak but to define what’s most important to you and do whatever part of this you’d want to do,” she says.

Because, at the end of it all, Munroe isn’t advocating for the Prius or attacking plastic fork users. Rather, she’s a regular, brilliant Joe, living life by her rules with her partner, her sons, a couple of cats, an old golden retriever and a puppy mutt to keep everyone humble. Her childlike story of Twisted Oak doesn’t judge or preach but, rather, sparks the “what-if” conversation, inviting you to dream big about what’s possible.

“It’s always a journey to create a self-sustaining life,” says Munroe. “You can make yourself crazy. Just do the best you can. Besides, I look ridiculous on a soap box.” 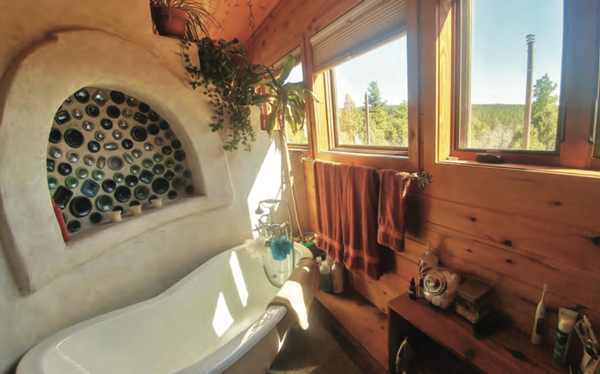 For folks intrigued by the bottle art projects, like the one above or on Twisted Oak's cover, Kristina Munroe founded Twisted Oak Consulting, which offers expertise in building or modifying homes sustainably./Courtesy photo