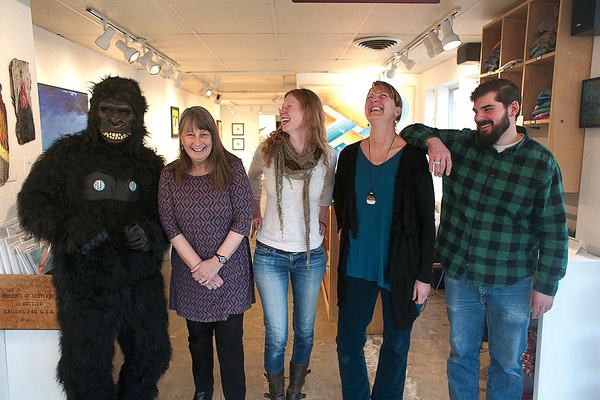 The members of Studio &, from left: Tim Kapustka (with gorilla stand-in), Maureen May, Elizabeth Kinahan, Carol Meckling and Peter Hay inside the downtown space earlier this week. The gallery celebrates eight years with a party this Saturday./ Photo by Jennaye Derge

In addition to all the leprechauns, shamrocks and Emerald Isle green, this March 17 will mark the eighth anniversary of Studio & art gallery, Durango’s charming repository of cultural activity.

Who among us could have guessed the original gallery would have made it this far, in the same location, thriving and evolving into a hub of artistic diversity? It all began with five artists seeking to find a place to work, exhibit and sell their art while interacting with each other and the public.

With the exception of founding father Tim Kapustka, the other four pioneers have moved on and been replaced with fresh talent, while keeping the number of co-owners to five. Kapustka now shares the premises with Elizabeth Kinahan (2012) and Maureen May (2015) along with recent additions of Peter Hay and Carol Meckling.

Kapustka points out that five is by no means an arbitrary quantity. “It is hard to operate a business in a true democratic fashion with five owners,” he admits, “But the thought of any more makes me shudder. When one owner leaves, we gather to consult our short lists of possible candidates and then go through a pretty involved vetting process.” Because they work so closely together, it is vital to the success of the group to find just the right person to be an owner. “We are essentially welcoming this person into our family,” he notes. As artists, each of Studio &’s members add exceptional talent, along with a broad range of mediums, styles and points of view to stimulate one another’s creativity.

Looking back to those early days, Kapustka half-jokingly recalls, “We didn’t know how to run a gallery when we started this, and although that can be a big disadvantage, in our case we just kind of did things the way we thought that we should do things.” He confesses that they did a whole lot of them wrong, but observes it always seemed to work out in the end. “A lot of times the wrong thing wound up being the better way, and it let us evolve and grow into this wonderful art hub that is so much more than a gallery,” he says.

Some of that evolution includes the highly popular Christmas Bizarre Bazaar and the diminutive “Recess Gallery,” which at only 8 cubic feet may just be the smallest gallery space in the Four Corners. The innovative concept of that nook is more than just its size; art pieces must be no more than 5-by-7 inches and cost no more than $100. In addition, live events have included music, dance, performance art and poetry readings; they have also staged live art in the window front on Main Avenue. All of the programs generate hefty attendance, great conversation  and exposure for some under-the-radar artists. But it’s not just the work of the five owners that can be seen. Five other artists are selected to be represented at the gallery on a continual basis, just not as owners, which provides an even wider mix of talent and output.

“We are looking for quality, but also variety and what the artists are trying to say with their work,” Kapustka explains. “Those artists include jewelers, potters, sculptors, photographers, textile and mixed-media artists, many of whom might not have exhibited here before.

Kinahan, a painter, joined the studio in May 2012 and remains an enthusiastic owner defining her experience with a sense of pride and good fortune. “It feels like having a second home on Main Ave., where I can go anytime to work, to meet with people or to just hang out. I love greeting people as they come in, telling them about the space and watching as they discover the little surprises we’ve placed around the studio.”

Meckling, who has been at the studio just five months, says she is thrilled with what she has with Studio &. “I was affiliated with a co-op gallery in Edmonds, Wash., where I was one of 20 artists,” she recalls. “Getting that many people to agree on anything was difficult. Studio & feels like a family in a good way and everyone has equal say and participation in all of the decisions.” At least one owner is on premises each day and likely will be there working on a project as well as greeting walk-ins, answering questions and providing artistic insight.

“I’m happy to explain my process when asked about it, and I know that many customers like seeing an artist working in the space,” a vivacious Kinahan says. “Often it leads to great conversations about all kinds of things, and occasionally I make a new friend that I continue to stay in touch with.” Kinahan admits that her initial reason for becoming an owner was to sell her work and gain exposure, but it went beyond her expectations. “Over the years, it has become much more about what we are doing in this community, and the growth that results from that,” she says. “I’ve watched people, myself included, be moved beyond words by performances we’ve hosted. We’ve received cards and thank yous for experiences people have had at our gallery; things that really touched them, made them think, and in the end, that’s growth. It’s incredible, and it’s an honor to be a part of it.”

DAC exhibits director, Hay, recently became a Studio & owner and admires his colleagues and predecessors. “What was built by the previous artist/owners is a place that nurtures people’s mind and soul. It is also a place that requires a fair amount of time and energy. I have to commend all of my partners in the amount they do and have done for years,” he says.

One of the obvious challenges for artists at Studio & is working in an open environment where you can be seen from the street or hovered over by interested visitors. It’s an experience Hay relishes. “The ‘fish bowl’ is rather appealing to me,” he says. “It’s a chance to diversify the people I get to interact with as well as a chance to simmer in my own thoughts and projects.”

In fact, he says it’s almost as if creativity oozes from the walls, as if by some strange sort of osmosis. “(The Studio) has its own feel,” he says. “It’s as if the inspiration from eight years of art making, planning and celebrating is absorbed into the walls, and it makes you want to create something.”

As for the eighth anniversary celebration – from 6-10 p.m. Sat., March 17 – Kapustka says he has long stopped trying to compete with St. Patrick’s Day, but the studio will still offer something festive for revelers. Past themes have included tennis, with a life-size cut-out of Andre Agassi, hanging racquets and 150 tennis balls on the floor; as well as a carnival, complete with games, prizes, a fortune teller, a “fishing” contest and even a wheel of fortune. One can only guess what the gallery will be this year, but you can be sure it won’t disappoint. “It is our way of giving back to the community,” Kapustka says. 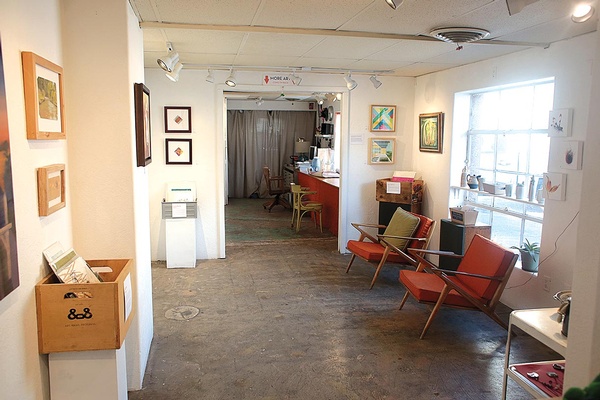 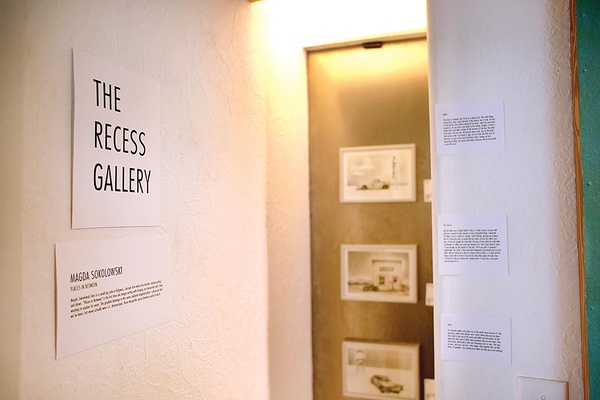 The gallery within a gallery, Studio &’s Recess Gallery, for diminutive works only./ Photo by Jennaye Derge