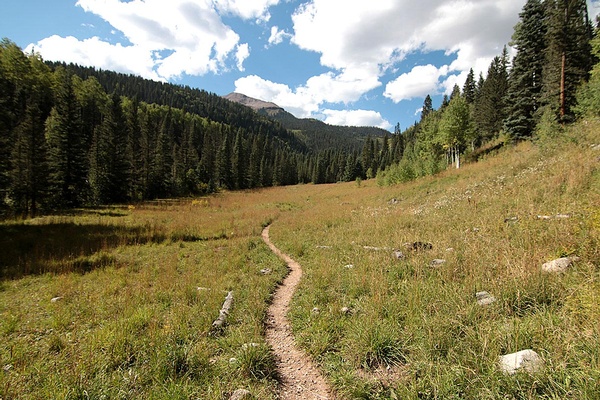 For many Durangoans, wealth is measured not in dollars but in the miles of trail around this recreational paradise we call home. Our trails are a source of pride that earn us national recognition and wistful accolades from visiting Front Rangers. They’re accessible to any who choose to step outside or off the pavement. Dogs love them. Children, too. Hikers find solace, and bikers and birders bliss. Even domesticated llamas sometimes choose the trail over the plush frivolities of civilization. From traipsing under the boughs of scrub oak to scrambling up the summit of Engineer, we all have the potential to be millionaires in this currency of dirt gold.

But when was the last time you stopped on a perfect ribbon of singletrack and thought about how much work goes into creating these endless tracts of happiness?

And so, on Sun., Sep. 25, Trails 2000 invites the community to the inaugural Happy Trails Festival at Buckley Park. The event commemorates “a happy town with fun trails” and benefits the future planning, building and maintaining of our local trail network. Mountain bike in the morning with Olympian Travis Brown and/or partake in an hour-long group run with the Durango Running Co.  From 2-6 p.m., a $10 ticket scores you an afternoon of music and a host of trail-loving vendors (food and beer extra.)

“The point of the festival is to celebrate all the real relationships the trails create for our community,” says Monroe-Brown. “There’s so much connection.”

Trails 2000 was founded in 1989 to coordinate trails across jurisdictions, modernize trail systems for recreation, organize volunteers, maintain trails and educate users. Twenty-seven years later, it boasts 2,000 dues-paying enthusiasts – and thousands more who reap what Trails 2000 and volunteers have sown.

And it’s not just for riders, mind you. “The Happy Trails Fest dovetails nicely with what has been going on this summer in the running community,” Brett Sublett, owner of the Durango Running Co., says. “The trail network, and Trails 2000 in particular, are the life’s blood of why we’re all here.”

Like Monroe, Sublett devotes his time and energy to growing the trail community and has enjoyed watching his store take great strides since opening last winter.

“A lot of it is getting involved with as many events as possible,” says Sublett, who also coaches the Fort Lewis College cross country team.

To his point, the day before the Happy Trails Festival, Sublett will help out at two races: Purgatory’s Mountain Marmot, a 12-mile race to the top of Lift 8; and a fresh-off-the-press ultramarathon called the Silverton Double Dirty 30 (SDD30).

“Brett is such a giver in this community and makes so many things happen,” Megan Finnesy, race director of the SDD30, says.

This year, Sublett and crew will man the Rolling Pass Aid Station at mile 21.9 on the 100-kilometer course. The loop starts and ends in Silverton, meandering along the Animas River before climbing through the glorious backcountry of the San Juans. The route gains over 11,000-feet of elevation and shall be kissed by the grace of Mother Nature, in sync with the peak of fall blaze. Finnesy chose this setting for the SDD30 after spending many hours over the last eight years volunteering for or running the Hardrock 100.

“A good course is made up of really good singletrack, is a single loop, and ends in a place where you can have a party,” she says. “I wanted to make a loop with the Colorado Trail. And then I wondered if I could take a race down the railroad tracks. Everybody said no way. But a friend of mine owns the Grand Imperial Hotel and he connected me with Al Harper who said, ‘absolutely.’”

Harper’s only requirement was that Finnesy place boards across the trestles. Alpine Lumber provided the wood, one of many supporters of the SDD30, which also that also includes 100 volunteers, Tailwind Nutrition and Three Pits BBQ.

The SDD30 is Finnesy’s second Colorado race, with the seven-year-old Golden Gate Dirty 30 established as a popular 50-kilometer race outside of Golden.

“‘Dirty,’ as in getting dirty when you go trail running, and 30 for 30 miles, obviously,” says Finnesy, a 1992 Fort Lewis College graduate who splits her time between Boulder and Durango.

For Finnesy, the race is more than just another mode to explore the mountains and trails. Besides feeding the souls (and soles) of participants, the event benefits Big Brothers Big Sisters of Southwest Colorado.

“Ultrarunning can be a selfish endeavor,” says Finnesy. “Everything’s about sleep, eat, poop, run, repeat. You don’t have much of a life when you’re training for these hundred-milers. When I ran Hardrock in 2012, I wanted my run to be about something more than just me. So in just two weeks, I raised $2,500 for Big Brothers Big Sisters.”

For the SDD30, runners raise money for BBBS for every mile they’ve run, says Finnesy. This year, 32 runners are registered so far and have already raised $5,000.

This year’s SDD30 ultra-athletes are simply paving the way for future participants, says Finnesy, adding that they’ll also enjoy a three-to-one ratio of volunteers to runners.

“They’ll be treated like kings and queens,” laughs Finnesy, noting low participation might be due to four Hardrock-qualifiers also taking place this month.

But if anyone can grow this race, it’s Finnesy. In a frustrating, hoop-jumpin battle, she’s been applying for a SDD30 Forest Service permit since 2012.

Part of the requirement for the permit was getting trained as a trail boss on a segment of the SDD30 course, so she joined forces with Hardrock volunteers and Trails 2000. In rain, sun, snow, electric storms and the gamut of San Juan National Forest climactic elements, Finnesy carried shovels, maps, water, the Leave No Trace principles, and a stalwart dedication to see her race dream come to fruition.

“Have you seen what the sheep do up there?” laughs Finnesy. “I’d love to see their permitting process.”

For Sublett, the newest entrant on the local running docket is indicative of what’s going on in the running community as whole. “It’s just exploding with new and exciting stuff all the time,” he says.

So whether you’re into the whole ultra thing or simply love fresh air, remember that it’s the way you ride the trail that counts. Who cares about the clouds when we’re together? Just sing a song, and bring the sunny weather. Happy trails to you, Durangoans. Let’s rejoice in our dirty side and share some ice cream.

To burn off calories in anticipation of that ice cream, there will be a group mountain bike ride led by Travis Brown, which meets at Buckley Park on Sunday at 9 a.m.; as well as a group run sponsored by Durango Running Co., which takes off from Buckley at 1 p.m. 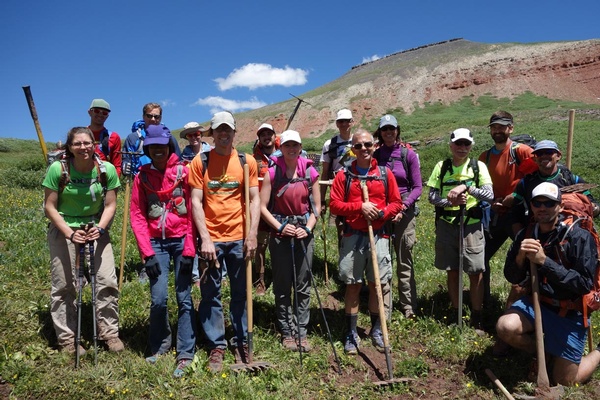 Dirty30 volunteers near the Colorado Trail. To secure her permit from the Forest Service, Megan Finnesy tallied 417 hours as a trail boss, working in tandem with Trails 2000./Courtesy photo

What: Happy Trails Festival, a benefit for Trails 2000

Who: Music by Eldergrown and the Afrobeatniks; beer from Steamworks and Ska; food from Gourmet Pagosa Pita, Fired Up, Bounty for the Belly and Purple Ice Cream Truck