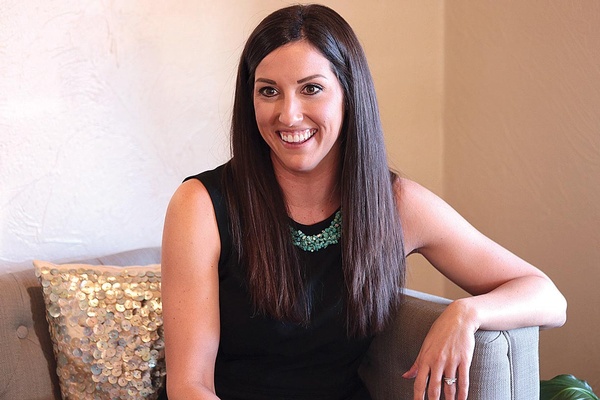 Haley Thompson Arias discusses her new nonprofit, the Living Forward Foundation. Thompson Arias, who suffered the loss of her father to suicide 10 years ago, founded the organization to help kids and teens who have lost a parent to suicide with educational costs as well as help them overcome the grief./Photo by Jennaye Derge.

When she was 20 years old, Haley Thompson Arias lost her father to suicide. That was 10 years ago, and today, the 31-year-old local chiropractor is working to use her pain to help others. Earlier this summer she launched the Living Forward Foundation, a pending non- profit with the aim of providing educational scholarships for children and teens who have lost a parent to suicide.

“I feel like when these things happen, you need to make something good come out of it,” Thompson Arias said Monday from her downtown office. “I had been thinking I really want to reach out to that community in some way. I truly believe it is immoral to be given a platform to do good, then refuse to stand on it. Why wouldn’t we?” One big reason: fear. Thompson Arias

should know, she once was beset with fear
of letting others know of her father’s death, telling only a se- lect few. She was afraid of “outing” her family, drawing nega- tive attention or making a fool of herself.

But then something changed: she moved to Durango.

After finishing her schooling in Atlanta, the native of southern Georgia, like many who have experienced such loss, decided a change in venue might help. In 2012, she relocated to Durango, where she began practicing as a chiropractor at Cafe? of Life.

“I think, in part, his suicide was the reason I moved away,

to escape it,” she recalled, sitting in her downtown office Monday.

But little did she know, the picturesque, laid back, remote Western town she chose as her new home had something darker lurking beneath the surface.

“I moved to a community that is plagued by (suicide),” she said.

So far this year in La Plata County, there have been 19 sui- cides. In 2016, there were 1,156 suicides in Colorado, repre- senting the highest number of suicide deaths ever recorded, according to the state Office of Suicide Prevention. Suicide is the leading cause of death for people 10 to 24 years old in Colorado.

wager a guess over such baffling statis- tics, relying on her own experience to form a hypothesis.

“People go to Colorado to find them- selves, and you get here and, well, it’s still real life,” she said, pointing to such factors as the high cost of living and low-wage jobs. “I tried running away from suicide,

but it’s even bigger here.”
Finally, Thompson Arias decided it was time to get off the

sidelines and do something. “When you start helping, you will start healing,” she said.

Last summer, she started donating $2 from every adjust- ment she performed into a fund to help children who have lost a parent to suicide to help cover education expenses.

“As a chiropractor for families in a town so affected

by suicide, I recognize that I am in a position to pursue making a positive impact,” she said, adding that others similarly supported her during her schooling and in buy- ing her business.

As the summer went on, and the fund grew, the idea started to blossom.

Awaiting its final designation from the IRS, the Living For- ward Foundation plans to add another component aside from helping kids and teens with education expenses. The plan calls for also pro-
viding adventure-based
programs as a way to
build kids up after the
tragedy and help them
bond with others in
similar situations.

“What happens
with survivors, there’s a
lot of shame. They feel
like they’re alone,” she
said. “I really want to
take that away and
open the door a little
wider. I want them to
do things that build
self-confidence, resilience and trust in themselves.”

This Friday, to help kick things off and introduce the or- ganization to the community, Thompson Arias will be holding a holiday celebration from 5 – 8 p.m. at her office, 635 E. Second Ave.

“The holidays can be tough enough for people who haven’t even experienced loss,” she said. “I know how hard it can be.”

Thompson Arias said the event is open not just to kids and teens, but parents, families and pretty much anyone who has suffered the loss of a loved one to suicide.

But kids are especially vulnerable, she said, because they are still forming their identity. And this is why she wants to make them the focus of her organization.

Part of this learning process is helping young survivors understand why suicide happens and – most importantly – how to prevent it from happening to them. Thompson Arias, who was a board mem- ber of the Second Wind Fund, which works on suicide prevention, said statistically, children of parents who die by sui- cide are more likely to

die by suicide as well. “There are so many layers, but I truly do not believe that some- one wakes up one morning and makes that decision,” she said. “I want kids to realize, just because someone they looked up to did it, it

is not a solution; it’s not a good choice.”
While Thompson Arias is the first to admit yes, it is a

heavy subject, her passion and excitement for her mission is palpable and contagious.

“We are already getting donations, which is amazing and completely unexpected,” she said. In fact, she envi- sions some day going national, hosting adventure-based programs for children across the country. But for now, she is perfectly content starting small, right here at home where it appears to be needed most.

“I really have no idea how many people will show up Friday night, but if just one kid shows up, and we can tell him what we’re all about, then it will be worth it,” she said.

For more information on Living Forward, contact Thompson Arias at haley@cafeoflifedurango.com or call (970) 385-0321. If you’d like to donate, a fund for the Living Forward Foundation has been set up at Bank of the San Juans.

Heartbeat Durango also hosts support groups for individu- als affected by suicide the second Wednesday of every month from 6-8 p.m. at the La Plata County Fairgrounds. For more info., call (970) 749-1673. 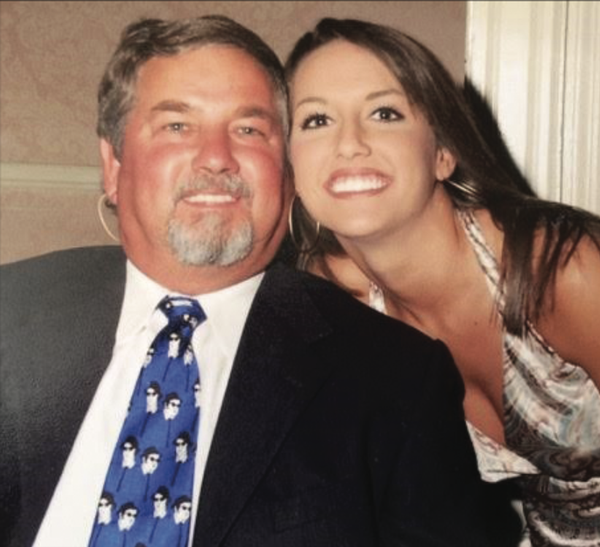 Dr. Rocky Thompson and daughter Haley. "In hind- sight, there were signs," she said of his suicide in 2007. "I was just starting to understand how important parents are in your life."/Courtesy photo.

Who: Anyone affected by the loss of a loved one to suicide