Here we go again!
Merely Players bring down the house with 'Mamma Mia!' 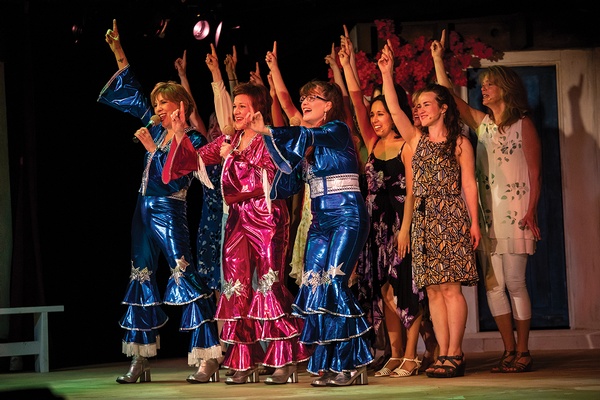 Glitter and sparkles reign supreme during Merely Players' rehearsal Tuesday night for "Mamma Mia!" at the Durango Arts Center, where the play opens Friday for a three-weekend run. The show is sold out, but if you show up to the DAC before the show and get your name on a waiting list, there's a chance you still could be a dancing queen./Photo by Stephen Eginoire

Durango denizens might be forgiven for any sudden uptick in singing Swedish pop songs on the streets in the next few weeks, because Merely Players is staging the regional premiere of the hit production “Mamma Mia!” The jukebox musical features the imminently catchy music of ABBA, and for the next three weekends at the Durango Arts Center, our local semi-professional theater company is set to rABBA-rouse every earworm in town.

In case you’re one of the three or four people living under some obscenely large rock, here’s how co-director Mona Wood-Patterson summarizes the show: “It’s an excuse to sing ABBA songs.”

Yet that’s all it takes to have a good time for an evening, as the show’s worldwide success demonstrates. “Mamma Mia!” is the seventh-longest running show in London’s West End history, and at 14 years, it enjoyed one of the top 10 runs ever on Broadway. Now that it’s finally been released to nonprofessional theaters, Wood-Patterson and co-director Theresa Carson leaped at the opportunity to bring it to life.

While Wood-Patterson acknowledges the show is centered around the music more than it is around the story, the musical still lays a fABBAlous plot as tricky as a game of Mouse Trap. Twenty-year-old Sophie is getting married in Greece, but her dad can’t walk her down the aisle because she doesn’t know who her dad is. She discovers three possible candidates, so she invites them all to the island for the ceremony, unbeknownst to her mother. ABBAcadabra! Hijinks ensue.

“Then they sing every cool ABBA song they can as they try to figure out the problem,” Wood-Patterson said. It’s not about the plot, gang. It is about the iconic songs, Suzy DiSanto’s amazing choreography, Tom Kyser directing music, JoAnn Nevils’ costumes, and Charles Ford’s fun take on what a Greek villa looks like on the Durango Arts Center stage, Wood- Patterson said.

“Everybody learns from each other,” she added. “I would venture to say that even our professional actors ... learn a great deal from the other people on stage. That’s the joy of collaborative art.”

Another joy of collaborative art is, of course, that the audience gets to experience the results. (And no, you probably won’t be the only one signing along to “Dancing Queen” during the big finale – after all, the reprise of that song, as well as “Mamma Mia!” and “Waterloo” have karaoke lyrics projected on the wall.)

There are two sets of leads in this production, each taking a share of the performances. This reviewer watched the performances of Mandy Gardner as Donna Sheridan, the mother of the bride; Siena Widen as daughter Sophie; and Stephen M. Bowers as Sam Carmichael, one of the prospective fathers.

However, the whole cast stole the show, as they say. Gardner has an undeniable presence on stage  as Donna, the one-time pop singer who now runs the island taverna where the entire musical takes place. She’s not larger-than-life or any kind of caricature, yet she fills the room the way all cool moms do. Not only does she own the taverna, but she owns the stage when she’s on it.

One of the great things about “Mamma Mia!” is its liberated approach to women’s sexuality and marriage (or “committing matrimony”), which is not seen as the be-all end-all. Never does anyone attempt to shame Donna for sleeping with three men in close succession or not knowing who the father of her child is. Gardner fills that role with a confidence befitting the uptempo vibe of the whole show and a tenderness befitting a parent grappling with what her daughter is feeling (as much as there is any introspection in this show, of course). Plus, her voice is one of the rocks of this cast.

Widen, a senior at Durango High School, fills Sophie’s beach shoes with an entirely different power. She’s the spark in this performance, a wily blend of mischief and innocence who believably tangles herself in knots of her own tying. She’s one of the vets of this cast, with experience in numerous DHS plays and other DAC performances.

The ensemble is full of other gems, as well. Of course, Dallas Padoven and Conor Sheehan shine as Sky the fiance? and Pepper the bartender – as they should. In Merely Players’ tradition, Padoven and Sheehan are homegrown actors who have gone on to successful professional careers of their own, invited back to Durango to perform.

Many others stand out, as well. Those include Donna’s friend Rosie (Jenny Fitts Reynolds), who really lets loose her pipes on the number “Take a Chance on Me,” and Jeff Graves’ lovable headbanging reminiscences as Englishman Harry Bright. And Suzy DiSanto’s choreography is worth paying special attention to – note that just because some dancers are in the back row, doesn’t mean they’re not worth watching for high entertainment value.

Part of what makes a production like this so special is that the audience will be blown away by the talent hidden behind faces they recognize from the grocery store. The 53 members of the cast and crew include people of every decade of life from their teens to their 70s.

“It’s exciting to get that meld,” Wood-Patterson said. “You never see that in other venues.”

Merely Players used to be one of the best-kept secrets in town. Not any more
– the company, Wood-Patterson said, has sold out every performance but one over the last four years. And “Mamma Mia!” is already sold out even before opening its run. (Sorry.)

But there is still a way to nABBA ticket. Hopeful attendees can go to the DAC an hour and a half before showtime to get their names on the waiting list. If someone calls to cancel their ticket (and if you can’t go, please do call and cancel),  then the seat goes to the next person on the list.

If you’re disappointed that you might miss out on one heck of an ABBA workout, Wood-Patterson encourages you to become a season subscriber to Merely Players. Subscribers get first shot at tickets for upcoming shows, in addition to the heartwarming satisfaction of supporting local theater.

“Upping the bar is what Merely Players is about,” Wood-Patterson said. “We’re going to have nearly 1,800 come and see this, and get to move their feet and heads to ABBA presented in a great way. It’s so fun to collaborate.” 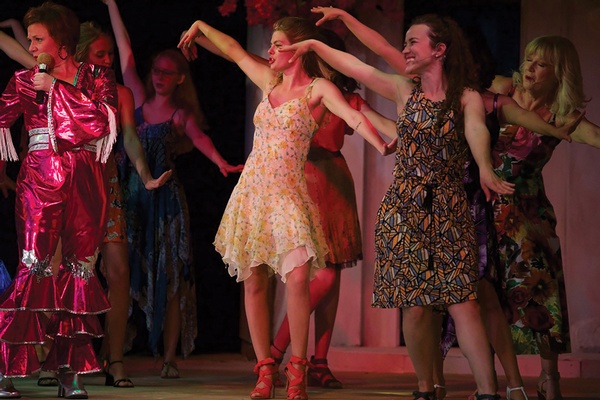 Siena Widen, center, a senior at Durango High School, fills the beach shoes of the character Sophie in the Merely Players' production of "Mamma Mia!" She's one of the vets of this cast, with experience in numerous DHS plays and Durango Arts Center performances./Photo by Stephen Eginoire