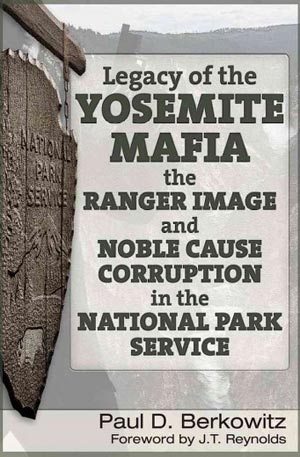 Don’t console yourself too quickly that America’s national parks are still “the best idea we ever had,” as author Wallace Stegner famously observed. Park Ranger Smith has a dark side, and it’s brought to light in the pages of Paul Berkowitz’s most recent nonfiction paperback, Legacy of the Yosemite Mafia: The Ranger Image and Noble Cause Corruption in the National Park Service. This mouthful of a title opens to a book packed with the types of juicy tales one would expect from the man deemed “the Serpico of the National Park Service Law Enforcement program” – and they’re all true. Dolores-based author Berkowitz is back in Durango tonight, Thurs., June 22, to discuss his latest compelling work to expose the underbelly of the National Park Service and offer his ideas for debunking corruption and encouraging change in this esteemed agency.

In Legacy, this former NPS criminal investigator reveals the shadier face of the uber-friendly, over-serious NPS law enforcement program as depicted in pop culture. Though chasing-Yogi shenanigans are perfect for Saturday morning cartoons, the crimes covered up in the NPS as revealed by Berkowitz will leave any national park lover blushing and sleuthing Google for confirmation. That’s right: sex scandals, drugs, murder, conspiracy, illegal taping, evidence tampering, to a name a few, have been rampant in the nation’s most picturesque law enforcement industry for over half a century. Based not on alternative facts but rather on news accounts, internal agency documents and personal notes, this dramatic case study challenges our preconceived notions of the historic NPS agency and the responsibility – or lack thereof – it has for upholding the laws it’s supposed to enforce. Sorry, NPS loyalists; you’ll want to close your eyes to these gloomy narratives, keeping the focus on that sunset at Grand Canyon or spray of Old Faithful.

Former co-worker of Berkowitz’s, Andrea Lankford, praises Legacy as a must-read for ranger hopefuls, alongside her riotous book, Ranger Confidential: Living, Working and Dying in the National Parks. Berkowitz’s book is full of uncomfortable details, she says, and should be required reading for anyone dreaming of saving baby bison from dumb tourists, rescuing a backpacker from the jowls of a grizzly or writing parking tickets in some of the country’s most pristine landscapes. “Sadly, many National Park fans and NPS employees (would) rather not see what’s behind the curtain of sanctity and scenery,” writes one Amazon reviewer.

While Berkowitz’s rendering underscores the ugly side of those protecting the land and the people, he also offers insights on how the NPS-LE should be reformed, and even points out things the agency does well. Legacy opens with Stegner’s proud stance of how “absolutely American” the National Park Service is and closes with Berkowitz’s rousing testimony presented before the House Subcommittee on Parks, Forests and Public Lands, on Oct. 15, 1985, in Yosemite. He ends with a call to action, pleading that “as a group (of field rangers), we are immensely proud of the work we do. All I ask is that you make it possible for us to be equally proud of the agency for which we work."

For those of you who are smarter than the average bear, don’t miss this better-than-reality-TV summer reading book. BYO pic-a-nic basket.

Who: Paul Berkowitz, presentation of his latest book, Legacy of the Yosemite Mafia: The Ranger Image and Noble Cause Corruption in the National Park Service
Where: Maria’s Bookshop
When: 6:30 p.m., Thurs., June 22