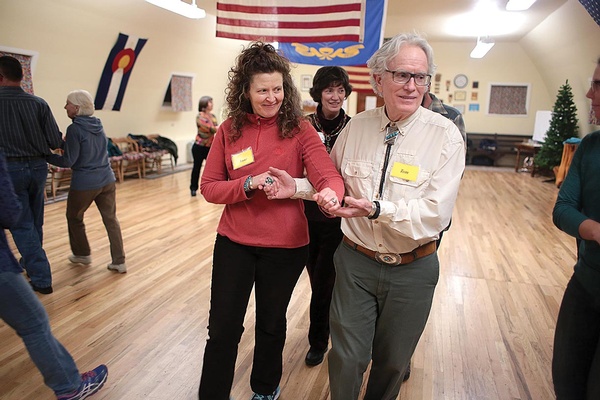 I’ve never been much of a dancer. With my big feet, long gangly legs, and equally large and awkward demeanor, my moves have never made a good impression on anyone. I can’t quite coordinate my limbs and there’s a small chance that “busting a move” could result in busting a jaw.

Back in grade school though, I took dance classes that required practicing my coordination. Granted these classes were a required part of physical education, i.e. “Introduction to Humiliation,” but I still tried to be OK at dancing because I wanted an “A.” In spite of my awkwardness and insecurities, I remember actually being sort of decent at square dancing, and I think it was just because I wanted to impress a boy who wore a cowboy hat and also because there was a teacher telling me exactly what to do every step of the way.

Square dancing is a fairly structured dance, which helps unstructured folks like me. It is generally done in “squares” with four couples, or eight people total, all facing one another in a square (thus the name). Dancers are partnered into “leaders” and “followers,” and everyone in the square is dancing and interacting with each other so if you get lost, there is always someone to turn you in the right direction. While you’re attempting to orient yourself, the instructor, or “caller,” sings out the names of dance moves, which works out great as long as you know what those names mean. If you don’t, fortunately, there is a place here in Durango that is open to teaching all Fred and Gingers, and PE flunkies alike.

Durango’s Wild West Squares meet every Monday night at the Florida Grange and is open to all ability levels. All that’s required is a willingness to learn. With its high ceilings and shiny wood floors, the grange – situated next to Sunnyside Elementary School on CR 172 – is a perfect venue for squares to join hands with their partners and promenade together. The pace is beginner-friendly, and there’s a handful of “angels” (aka helpers) to assist you if you suddenly can’t tell your right from your two left feet.

Even if you show up to the Monday night class alone, as I did, you’ll find – just like life – there are plenty of people to do-si-do with. And lead instructor Carla Roberts is patient and understanding that some may need a moment to grasp how to actually dance in a square, learn what “starring” is or how to hold hands with a total stranger.

Roberts, who has been dancing for about 10 years, began calling eight years ago after becoming intrigued by hearing her first lady caller. Her background as a professional vocalist and multi-instrumentalist helped her to reach her newfound dream, and she attended her first “callers school” in North Carolina in 2010.

“I adore watching the dancers having fun,” Roberts said. “Seeing the smiles, laughter and goodwill of healthy social interaction sends me home with a smile on my face every time. I like teaching so much that I’ve focused my career as a caller on sharing with caring. We want dancers to have a safe and welcoming environment to learn in.”

She has been teaching the caller-run Wild West Squares program for about four years. The idea is to give dancers a foundation to “think on their feet” to become equipped with skills to excel at team dancing.

True to her mission, I definitely felt welcomed and indeed had a grin on my face. In a class of mixed levels, I never would have guessed the extent of the square dancing wisdom surrounding me. One gentleman who helped me decipher my right from my left, Carl Schaaf, was as humble as they come. He helped me along the way and then later told me he’d been square dancing for five years, moving from “basic” to“plus.”

A fifth-generation Durangoan, Schaaf said it took a while for he and his wife, Judy, to join in on the fun. His friends lured them in, and they’ve stuck with it since.

“We were impressed by (our friends’) enthusiasm and enjoyment and felt it would be a good way to be mentally and physically active,” Schaaf said.

And while the health benefits may be measurable, if anything, it’s just a great way to get out of the house on a Monday night when you might otherwise be lounging in front of Netflix.

Schaaf even mentioned that one of the group members wears an activity tracker and has noticed that square dancing might provide more overall health benefits than his long-distance bike training considering the time invested. That’s a mighty big statement, especially for a cycling-centric community, but if anything it’s a hoot’n hollering good time.

In the future, Roberts hopes to book live bands, such as Six Dollar String Band, for practices. She’d like to open up a Saturday class for new dancers as well. While that is all in the works, one thing is for sure, square dancing is anything but. With roots

in 17th century England, with Spanish, French, Native American and African influences as well, Roberts says square dancing is ramping up in popularity all over the world, including Japan, Germany and even China.

In other words, anywhere people love to have fun but also want a challenge. “That is a very heady mixture that sets the stage for a lifelong skill that can be used all over the world,” she said.

All you have to do, is take that first step. 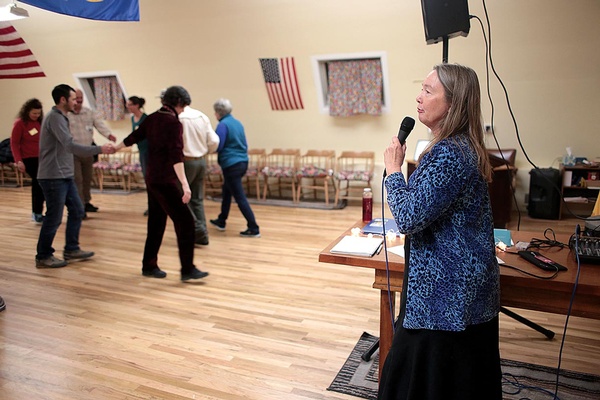 Carla Roberts calls out moves during a recent square-dancing event. Inspired by an- other female caller she met some years ago, she has been calling the Wild West Squares for four years./Photo by Jennaye Derge