Homeless in Europe: Birthday in the Father Land
A short jaunt into Germany provides more action than bargained for 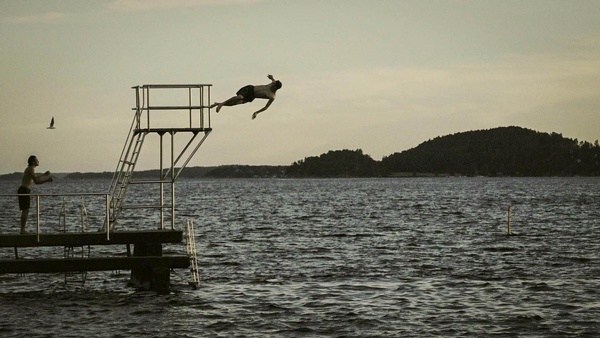 I'm aware that I promised last time to write about our experience with some "Swedish Vikings.” Although that story is well deserving of being told, and I did in fact write about it, I thought about my impending applications to college and decided it was too risky to publish. It chronicles one of the stranger and more hilarious experiences we've had on our trip, and if you'd like to get a copy of the article, I'd be happy to send it to you individually.

With that being said, I will catch you up to the point where I have decided to jump back into our trip...

After our stint in Voss, we took one more train to the capital of Norway, Oslo. From there, we began bike touring in earnest. We made our way south from Norway into Sweden. It was here we met our Swedish Viking friends. Next, we traveled along the absolutely breathtaking coast of Sweden, spending our days island hopping and cliff jumping. Finally, we reached Gothenberg, Sweden, where we paid for lodging for the first time on our entire trip at a friendly little hostel. The next day we boarded a ferry to a city in northern Denmark called Frederikshavn. From there, we began riding south along the simple and extremely flat coast of Denmark. We met a series of generous and inspiring people along the way, and we rejoin our trio as we sleep in yet another stranger’s beautiful seaside home...

I awoke in an immaculately clean living room surrounded by white couches and model sailboats. We were still in Denmark, but out the bay window, was a dark, choppy section of the North Sea with green, rolling hills on the other side that marked the beginning of "The Fatherland," aka Deutschland, aka Germany. I rubbed my eyes and stumbled into the dining room where the mother of the house, a small brown-haired women who, despite her stature, wielded a gaze and poise that hinted at considerable force of will, had set out a beautiful Danish breakfast. At my place at the table was a nicely wrapped, little red package with a bow on top. This was due to the fact that it was Sept. 17 – my 19th birthday. Keenan, Will and I sat down with this generous Scandinavian family and ate a delicious breakfast filled with conversations about the absurdity of Donald Trump and the singing of “Happy Birthday” followed by a fair amount of blushing on my part.

After a very sincere thank you to our host family and saying goodbye, the three of us did the short 15 kilometers to Flensburg. Our plan was to spend the next 24 hours here to celebrate my birthday and see what kind of trouble we could find. All afternoon we walked up and down Flensburg's main street, stopping at H&M to buy some birthday clothes and just to have something to wear that didn't smell like a month of bike touring.

By late afternoon, we found ourselves in a small park by the train station cooking pasta and drinking a celebratory 2€ bottle of birthday wine. We were having a grand old time. The most beautiful thing about bike touring is its simplicity. Our daily problems consist of finding a place to sleep and something to eat and planning our route for the next day. Apart from that, our time is filled with nothing but new experiences and thinking about whatever captivates one's mind. It truly offers the ultimate freedom from deadlines, stress – anything other than the pursuit of adventure.

I think it is important for everyone to let their mind wander like this for no other reason than to experience a different reality. For me, at a time when I am thinking a lot about my future, it has shown that there are truly so many ways to live on this planet. The mindset I have due to my previous experience is by no means the one that has to stick with me my whole life. An adventure like ours gives time to deeply examine oneself and truly dissect values and ambitions. For me, this is proving invaluable.

After pasta in the park, we locked up our bikes and set out by foot into the gathering darkness. Our first stop was at Flensburg's oldest cathedral. We entered what appeared to be some kind of nighttime mass. Inside, a Gregorian chant was blaring and that, in combination with the heavenly murals and the feeling of invincibility one can only feel on a birthday, made me feel like I was riding a tiger through a religiously themed rock opera into the sunset. The night would be a good one, or so I thought at the time.

An hour or so later, the three of us were walking past replica 1800s trading ships that inhabit Flensburg's harbor when we came upon a crowd of young people illuminated by a single street light. Voices were being raised and a small circle formed. In the middle, two kids began pushing each other and eventually were engaged in a full-fledged fist fight. Friends on both sides were trying to hold each combatant back but clearly there was real malice here. The three of us walked by as quickly and inconspicuously as we could. We sat on a bench a couple hundred feet away. We were all a little on edge and became even more so when Will said he had seen what looked like a pistol on one of the benches. Seconds later, one of the kids bolted up a small embankment into the shadows, and the whole group followed. Then, BANG! We didn't fully realize what had happened and didn't wait to find out. We bolted and ran two blocks away, adrenaline pumping. Turns out Flensburg is kind of sketchy.

Twenty minutes later, we were taking refuge on the front stoop of a church eating apples we had picked from a nearby tree and listening intently for any signs of unrest. Once our apples had become only cores, we decided it was safe enough to make our way back to the train station where we had decided to sleep. On our way, walking through a nicer part of town, we came upon a lively party filled with men in suits and women in tight-fitting dresses and heels. Being my birthday, I thought we also deserved a bit of a party, so we ditched our down coats, buttoned up our new H&M clothes and walked in like we owned the place.

In a big, open gymnasium type room we found a half-eaten birthday cake and all three of us took a respectable slice. Keenan and Will sang happy birthday quietly so as not to alert other party goers of our nationality and we scarfed down the delicious cake. After that, we moseyed out of the party trying to take on the air of young Germans who had clearly been invited but were simply very tired.

That’s one more thing we have learned on this trip: how to act like you fit in when you absolutely do not. Other examples include: nice hotels with continental breakfasts, museums that are free for university students, and pavilions that offer dry places to sleep.

After that fitting ending to what had proved a very unusual birthday, we threw down our tarp in an obscure dark corner of a city park and fell soundly asleep, starting off my life as a 19-year-old in style.