Homeless in Europe: Riders on the storm
An epic sufferfest on one of the Alps' highest passes 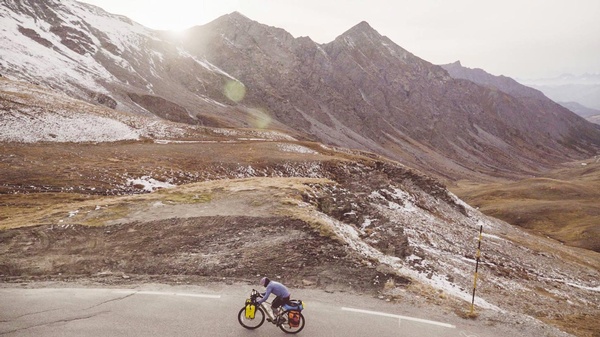 Domi Frideger, high on the Col Agnelo and his way to meeting Jesus.

It’s Oct. 12, and I'm at 7,500 feet in elevation on a windy road that climbs an iconic pass called Col Agnelo, which connects France and Italy through a little notch in the Alps. It’s 6:30 p.m. and the sun is hanging low in the west, just above the jagged mountains. In the lower elevations, it’s already been dusk for an hour or more. The oncoming darkness is ominous, but what is even more ominous is the view up valley. We still have 1,500 vertical feet to do in a mere 2 miles. In desperation and slight panic, I dismount my bike, push it until I find a flat spot and let it fall to the ground. Keenan is far behind, and I decide I need to wait for him. I deliriously put on a coat and a beanie and curl up on the shoulder of the road looking like a dying animal. My thoughts are stuck on a continuous cycle: we can’t do it; we have to do it; my mom’s smiling face in Durango.

Two weeks earlier, we woke up in a city park in Amsterdam. The night before, we had been rudely awoken by sprinklers and police officers and had not been able to truly fall asleep till 5 a.m. Nevertheless, I felt amazingly refreshed considering the next morning. However, when I looked over at Will, his face told a different story. His furrowed brow and downcast eyes made clear the headache he had been plagued with for the past week was present as ever. Not one to complain, he packed up his bags and mounted his bike in silence. Not a word of protest, but clearly in discomfort.

As we continued south out of Amsterdam and into southern Holland, it became clear it was going to be harder and harder to muster Will to go forward. His bike, older than Keenan’s and my own, had new noises and malfunctions daily. The strong wind blowing off the North Sea seemed determined to blow directly in our faces no matter which direction we turned, and Will’s headache seemed only to mount in persistence and severity. There was no respite, and as a result, his mind naturally swam back to his warm bed in Durango and the comforts of home – where he ultimately left us to return to.

Three weeks later, as I lay shivering on the cold hard ground on Col Agnelo, I found myself also thinking of the comforts of home. Keenan and I had begun that morning like any other. We begrudgingly crawled out of the warmth of our sleeping bags into the sub-freezing morning and looked at our majestic surroundings, the tips of the mountains turning cantaloupe as the earth rotated into a new day. We ate our muesli by the campfire and tried to mentally prepare ourselves for what lay ahead. However normal the morning was, our plans for the day were uncommonly ambitious.

What lay ahead of us was the legendary and iconic Col Agnelo. A classic climb in both the Giro d’Italia and Tour de France (it’s actually rated as an “hors-category,” which means it is designated a climb that is "beyond categorization,” the most difficult classification possible). On our attempt, we would be starting from 2,800 feet and would ultimately top out at 9,202, meaning a grand total of 6,202 vertical. Normally, we would split a climb like this up into at least two days. But as fate would have it, the Mediterranean Sea wanted us to get to the top before night fall. This was because by 9 p.m., a fast-moving, violent snow storm would be rolling in off the ocean and was forecasted to dump up to 2 feet of snow on the pass.

We set off around 10 a.m. and immediately entered a canyon so steep on both sides it could almost be considered a slot canyon. The rock, a durable and classical Italian limestone, turned the piercingly cold and clear creek that divided the canyon an energetic turquoise. All morning we rode in the shade of the canyon, which motivated us both to keep moving in hopes of avoiding the cold that inevitably consumed us as soon as the body stopped working.

By lunch, which was pâté and mustard smeared on tortillas, we had exited the canyon and stood at the base of the first real switchback. Above us, the end of the pass was invisible, but the mountains loomed, giving very little confidence. On the bright side, the sky was still clear, no sign of snow. Keenan and I began the slog.

By 4 p.m. both of us were feeling the climb. Our bodies were depleted of electrolytes and the pâté-mustard wraps we had eaten were not exactly the ultimate fuel. We were about halfway up the climb in the middle of a formerly glacial valley covered in yellow dying grass. The architecture of the towns we passed through told us stories of how harsh the winters must be. Big strong log houses with roofs of slate. These houses were designed to carry tons of snow without flinching. We just hoped we wouldn't have our reflexes similarly tested.

Two hours later, I’m curled up on the side of the road thinking about my mom. It was at moments like these when I understood a bit of the mindset Will must have had as we rode through Holland, his head pounding, his bike breaking and his will faltering. A sense of exasperation and hopelessness when considering the immense challenge that still lay ahead. For Keenan and I, this feeling was confined to the slopes of the Col, but for Will it was much more prolonged and nagged him for a month. For Keenan and I, stopping was not an option. We were in the middle of nowhere. For Will, two weeks earlier, leaving had been an option and he took it. Will flew out of Paris and left Keenan and I as a duo. Neither of us blame him for his decision. The struggle is real for everyone. For Will, it was simply too much. Much the same as the struggle I was currently facing on the Col. I would’ve left, too, if I had the option.

However, not completing the ascent was not an option. If we camped on the pass, we would awaken to 2 feet of snow and the road would be impassable. We would quite possibly die. If we turned around, we would be two weeks off schedule and no longer be able to enter Italy. As Keenan climbed up to me some 20 minutes after I had begun resting, I felt better. I stood up in an almost dream-like state. Keenan, always the optimist, came up with a smile on his face and laughed at how emaciated I looked. He took out his camera, did a short interview and then the two of us got back on the bikes. Every pedal stroke hurt. With every half percent increase in the road’s grade the effort required went up exponentially. We only had 1.5 miles to the top, but it truly was the hardest 1.5 miles of my life. I simply had nothing left.

Finally, after almost an hour, we reached the top of Col: 9,002 feet. With one foot in France and one foot in Italy, we celebrated. But the celebration was short lived because a fog bank was aggressively rolling in from the Italian side, bringing the temperature to around 14 degrees fahrenheit. All the sweat that had just been dragged out of us by the climb was quickly freezing. At this point it was around 7:30 p.m and the sun had set. Although we had successfully climbed Col Agnelo, we were still at 9,000 feet with an oncoming snowstorm. The closest town was a little Italian village called Pontechianale, which lay some 2,500 vertical feet below us.

We put on every layer we had and began our descent through the foggy dusk. It started out being fun, Keenan and I talking excitedly about how gnarly the climb had been, but quickly became fairly miserable. Our hands, grasping desperately to our brakes, started to tingle and then became numb and then truly lost all sensation. It’s an amazing feeling when your hands get to that level of cold. They begin to feel like stumps, like your fingers have disappeared. We became worried and stopped to warm them retreating them into our armpits. As we stopped, we noticed each other's eyebrows and eyelashes forming small ice gardens.

With a considerable amount of pain, our fingers came back to life enough for them to function, and we set off once more. Finally, we rolled into Pontechianale in the dark. We had heard about a fairly cheap refuge we could stay in as an alternative to camping. After a day of that magnitude, we thought we deserved it. Thanks to the help of an incredibly charitable Italian family who invited us into their house and called the refuge for us, we found it.

After checking in and making a quick dinner, I passed out quicker and slept deeper than any other time in my life. The next morning, we awoke to almost a foot of freshly fallen snow. Never have I been so glad to be inside and warm. The ascent of Col Agnelo was the most challenging day, both mentally and physically, I have ever had on a bike. It taught me that when you think you can’t go on, and physically you shouldn’t, you still can, although it’s going to hurt. It also reinforced the lesson that motivation is truly the catalyst to getting things done. Without motivations, failure is an option. In this case, impending death did an excellent job of motivating me. Most importantly though, the climb gave Keenan and I an understanding of why Will left that we previously had not understood. It created empathy. 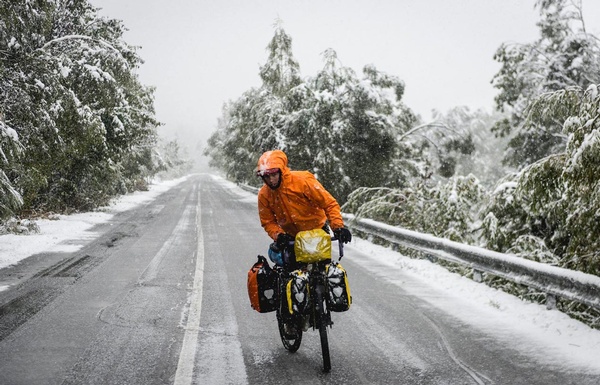 The day after: Domi and Keenan safe and Italy and happy to make their way to lower ground