Homeless in Europe
Episode 1: Pride tales a soaking in Norway

The sky blazes above a Norweigian fjord just north of Bergen, Norway. The relative calm in this photo is highly deceptive of the next morning's chaos.

(Author’s note: My name is Domi Frideger and I am a recent Animas High School graduate and have lived my entire life in Durango apart from one year in France and 9 months split between Mexico and Spain. This year I have chosen to take the increasingly common and trendy option known as a "gap year.” I have chosen to begin this gap year with an adventure that will test my abilities and greatly push my comfort zone. Two friends, Keenan Desplanques and Will Berger, and I are bike touring from Bergen, Norway, to Barcelona, Spain, a distance of 2,500 miles. And we have to do it all in three months. Along the way, Keenan will be filming a documentary about how struggle – hopefully – leads to greater personal growth and a deeper understanding of the human condition.)

Though Keenan, Will and I all flew out from different airports, we met on the front stoop of the Bergen airport without a problem and, more importantly, with all of our gear. We were amazed at our luck and took the relative ease of baggage claim as a good omen. Once we had assembled our bikes and all eaten our fair share of baked beans straight from the can, we were on our way. As we pedaled our noticeably heavy and unwieldy bikes away from the airport, a feeling of levity and incredulity surrounded each of us. Months of planning and expectation had finally culminated into the real thing. We were here, in Norway, on our bikes with three months and an untold number of adventures stretching out before us until our inevitable flight back home from Barcelona.

That feeling of lightness lasted about 2 miles for Will and I, but for Keenan the weight of his 50-pound bike plus his precariously mounted 50-pound camera bag was proving problematic. Soon, one of his straps became caught in his wheel. This problem was easily fixed, but within the next 500 yards, Will got two flats, and then Keenan had another strap mishap. That night we didn't even make it into Bergen proper. Instead, we ate dinner at the only "restaurant" that was open at 11 p.m., McDonalds, and pitched our tents on a well-kempt tee box of a golf courses.

The next morning, we awoke to light rain but lots of determination. We packed up our little camp and continued riding into Bergen. As we went through one of Norway's many bike tunnels, Keenan's extra burden proved too much. One of his errant bag leashes got stuck in his spokes and something had to break. It turns out the weakest piece in the system was the aluminum pannier rack that straddled the back wheel. It was ruined.

So, with Bergen tantalizingly close, we turned around and investigated the nearest shopping center. Thanks to some friendly locals, we were directed to XXL, Scandinavia's equivalent to Sports Authority. There, Keenan bought a bike trailer, and the three of us were off. Will and I pulled ahead of Keenan quickly. As we cruised ahead, Keenan struggled, but at least we could travel without problems every 2 miles.

Finally, our attention was not devoted to gear, and we had some time to observe our surroundings. The first thing we noticed were the cars. Norwegian cars tend to be much higher quality than typical Durango ones. Whereas in Durango the average car may be a 2001 Subaru Forester, in Norway, it’s a 2012 Mercedes or BMW. The other thing that was most striking was the number of electric cars. It seemed almost every fifth car was a Nissan Leaf, Electric VW Golf or Tesla – so many Teslas. It soon became a game to try and spot the most tricked-out Tesla.

Turns out there are all kinds of incentives for Norwegians to buy electric cars, like waived toll booth fees and free charging stations. My biggest takeaway from Norway was how a government’s values truly shape the values of its citizens. Due to the way that the Norwegian government has incentivized sustainable living and energy saving, the whole country is quickly assimilating to this new way of life. It's truly remarkable.

While the majority of Norway was living a strikingly 21st century life, we were not. In fact, we weren't living much better than cavemen. After Keenan got his bike trailer, we were much more mobile and quickly moved through Bergen and into the Tolkien-esque fjord lands on Norway’s west coast. On our first night, we stayed on a little grass beach at the end of a fjord, and the beauty was almost indescribable. As the sun set, the clouds turned from orange to lilac, reflecting off the calm water. The sky was framed by towering 2,000-foot granite cliffs ringed in green forest and rolling meadows. That night, we ate instant mashed potatoes with carrots and pesto sauce and finished the night with a frigid ploof in the sea. We went to bed with the feeling of revelation that often accompanies a view like ours, but when we awoke the next morning, the spell had broken.

Replacing the blue sky of the day before were deep-grey rain clouds emptying their contents remorselessly onto our barely coping tents. After cooking some muesli (a dryer, blander version of granola) in the vestibule of Keenan's tent, we decided to press on. Unfortunately, it was impossible to take our tents down without getting them completely drenched, so another wet night was inevitable. All morning, we rode into the merciless rain and started to become fairly depressed. What lay ahead was at least a week of very strenuous biking up and over countless fjords before we got farther inland. Every night our tents, sleeping bags and all of our clothes would become just a little bit wetter than the night before, and to top it all off, all we had to eat was instant mashed potatoes and tuna.

We stopped at a bakery at the top of a climb and spent way too much money on coffee and sandwiches. This brought our collective spirits up, and we gritted our teeth and set out once again into the wind and rain. Just before we left the bakery, however, one of the cashiers told us about a train station in her tiny fishing village and our mental toughness completely caved. We got really excited, biked downhill to the station and hopped aboard a train to Voss, Norway, which was on our way inland.

We all realized what weenies we were for giving up so easily, but sometimes the easy way is the right way, and one has to take into account the long-term success of the trip and forget pride.

Next week: the tale of our time in Voss, which proved itself just as worthy an adversary as the rest of Norway. 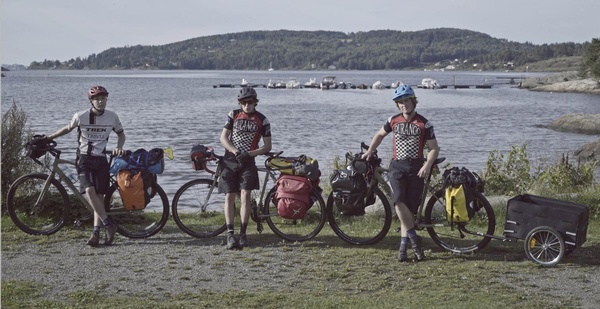 Recent Animas High graduates Domi Frideger, Will Berger and Keenan Desplanques pose for a groupie on the coast of Norway at the beginning of their trans-European bike tour pose.