Homeless in Europe
Highs, lows and the kindness of strangers 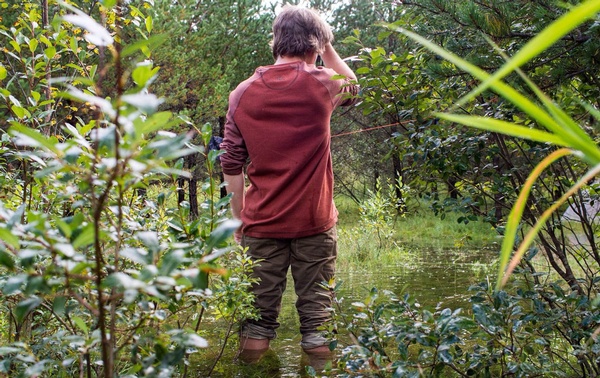 (In last week’s episode: Domi, Keenan and Will had just landed in Norway, struggled with gear problems and then awoken to a serious rainstorm. They finally settled on taking a train to Voss, Norway, to escape weeks of rainy bike touring.)

Our day had flipped 180 degrees. When we had woken up, it had been on a flooded field feeling very cold and alone. Only about four hours later, we found ourselves on a modern Norwegian train whizzing past the dramatic fjord lands and talking to a very pretty 20-year-old girl who, it turns out, was a highly accomplished sky diver. Strange the places one finds themselves.

As we got off the train in Voss, the weather was clearing up. The rain tapered off, moving away in the same fashion as the sound of a car driving away from you. Voss is a beautiful mountain town that lies in glacial valley ringed by towering peaks. The city contours a lake comparable to a professional sports arena: not huge but not small enough to swim across. We installed ourselves on the banks of this lake and set to work drying our things. The three of us sat basking in the sunlight, all of our belongings weighed down by rocks, and on our faces there were the smiles of paupers who had stumbled upon a pile of gold. Instead of the rain and the cold, we had sun, dry sleeping bags and a beautiful mountain town to call our own. What else can one ask for?

We decided to stay in Voss for another five days, in part to get to know the place but mostly because the train tickets from Voss to Oslo were considerably cheaper if we waited. So, with the promise of five days’ rest and relaxation, we set out along the banks of the lake to establish camp. We pushed through some pine needles and came across a perfect little spot. The ground was soft due to a strange grass that almost felt like a moss, and we had views of the glaciated peaks that surrounded town. We pitched our tents, put on our comfiest fleece and sat down to a traditional Norwegian meal of rice and bean burritos. We went to bed feeling safe and comfortable in the knowledge we would not have to struggle for at least five days. I fell soundly asleep to the sound of a light rain tickling the fly of my tent.

Have you ever been on a hike when, completely out of the blue, a branch from the person in front of you slaps you squarely in the face? Then you know something about the feeling I awoke to the next morning. It was 6 a.m. and for some odd reason I was awake. I looked up and saw the silhouette of almost a hundred little spiders coating the outside of my tent. Strange. Then I rolled over and felt wetness seep through the walls of my sleeping bag. Immediately alarm bells rang because my sleeping bag is filled with goose down and should not get wet.

I forced the grogginess out of my head and took stock of my surroundings. What followed was one of life’s "Oh shit" moments. I was lying in 4 inches of water. My bag of electronics was half submerged. My book, Endurance, was threatening to sink just like the ship. I scrambled out of my sleeping bag and unzipped my tent to find both pairs of my shoes floating and the entire campsite submerged in up to a foot and a half of water.

I couldn't tell if I should be angry or burst into laughter at the absurdity of my situation. Instead of processing, though, I sprang into action and pulled my down bag, book, electronic bag and everything else out of the tent and to the dry bank 10 feet away. Next came the tent, which was serving as a spider lifeboat. I dragged it ashore with some effort due to the fact it was now full of 20 or so pounds of water.

Meanwhile, Keenan was sitting in his tent (which, like Will’s, had been placed in such a way that the water lapped their vestibules but was otherwise completely dry) thinking a Norwegian bull elk or bear was sloshing outside. He poked his head out and to his great relief and amusement, saw only me in my boxers, thigh deep in water looking slightly grey with disgust. Will quickly followed suit and in a short while we had all of our things moved up to higher ground.

What we deduced was that the "light rain" in the beginning of the night had been much heavier at higher elevations causing the lake's tributaries to swell and ultimately cause our friendly lake to spill over into our little Nordic haven.

So, for the second morning in a row, our spirits had been completely dampened.

All day we tried our hardest to dry our gear, but the weather was alternating between overcast and a light sprinkle which is suboptimal for drying things. By 7 o’clock that night, I was resigned to the fact that I would be sleeping in the dank of my bag. We left our tents set up, hoping they might dry a little better and headed to the Voss train station where we knew we'd find the elixir of life, free wi-fi. As a last-ditch effort, Will and I sent out some requests on the travelers’ app, Couchsurfing.com and, low and behold, we got an answer. Some man knew some women who could host us for the night. We called her and she agreed to meet three strange American teen-agers outside the town’s church at 10:30 p.m. Brave lady. We rushed back to our tents, broke camp and made it to the church just in time.

Anne was waiting for us on her commuter bike wearing a smart looking plaid raincoat and a slightly apprehensive smile. We then followed her to the house she had just recently moved into in a nice residential neighborhood. There, we unloaded, apologized for our pungent odor, and thanked Anne so many times she became sick of hearing it. We all took a shower, one of the best of our lives, and fell soundly asleep in the cozy and, most importantly, dry bedroom of Anne's absent son.

The next morning, I half expected another nasty surprise, but was instead greeted with the smell of toast and eggs. We ran downstairs like kids on Christmas and saw the beautiful spread Anne had prepared. There was smoked salmon, jam, honey, ham, bread, juice, traditional Norwegian brown cheese and liver. We ate almost all of it as Anne told us about her career as an elementary school principal and her freestyle skier of a son. After reorganizing all of our bags we packed up and thanked Anne. Leaving her even after one night felt like leaving home. We owe so much to her and will always remember her hospitality.

These first days in Voss were a great introduction to the trials and tribulations of traveling and even more of bike touring. In the weeks that followed, we would notice a similar trend start to form. Life would be really hard and almost unfair, but quickly our luck would turn, and we would be rewarded with experiences that made us almost completely forget our troubles.

Before I left home, my dad, who is an experienced bike tourer himself, told me that bike touring will present you with some of life's lowest lows but also its highest highs. That has proven itself true many times over.

Next week ... The tale of another couchsurfing adventure with a Swedish Viking.