Homeless in Europe
Amsterdam: the city of dreams 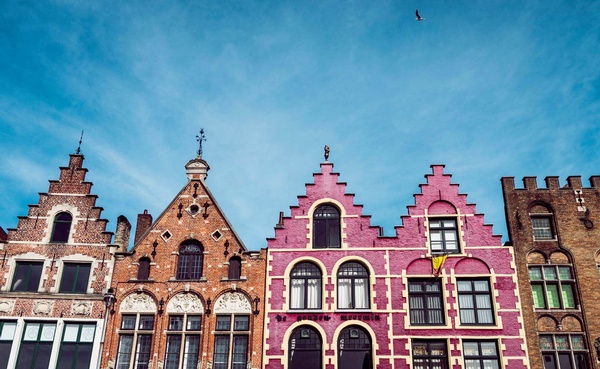 After our stint in Flensburg, we decided we weren't big fans of Germany, and according to our calculations, would not reach Barcelona by our departure date at our pace. So, to remedy both problems, we bought train tickets. This may seem like taking the easy way out, but in reality, taking trains is much more stressful and difficult than bike riding. On our 10-hour train odyssey from Flensburg to our final destination of Amsterdam, we had to lug three heavy touring bikes and one bike trailer on to eight connecting trains. Unfortunately, the train stations we were subject to were designed without a thought toward bicycles, making switching platforms a Herculean task. Will and I would awkwardly shoulder our 70-pound bikes up and down stairs while Keenan struggled to cram his bike and trailer in the tiny train station elevators. To maximize our stress levels, layovers in each station averaged about 10 minutes. This forced us to run across every train station and even led to us missing a train at one point. By the time we finally arrived in Amsterdam close to midnight, we were thoroughly glad to be free of the quagmire and convinced that three weeks of riding would've actually been much easier and more pleasant.

My memory of arriving in Amsterdam is almost dream like. The city, crowded and bright, was filled with sights and stimulus almost too much to handle in my state of exhaustion. We quickly left the main drag filled with tourists, and as we rode through the winding streets my mind began to clear and little hints of the city's character began filtering in: An old hippy van with a rusted bumper sporting a Grateful Dead sticker. Young people in thick fabrics pedaling past, giggling about some unknown joke. The city's canals lined with house boats surrounded by little aquatic gardens. This place had soul, and it was a soul not very different from my own. I could just tell. That night, I went to sleep with the feeling of apprehension and excitement one feels after the first night of meeting someone they might be falling in love with. I wanted sleep to come quickly so I could get up the next morning and get to know the city better.

The next day, the sun rose only to be blotted out by Northern European grey. The three of us awoke to find ourselves in one of Amsterdam's many parks, with joggers and dog walkers giving us sideways glances. We quickly packed up and headed into the city in search of breakfast. As we rode toward the city center, it became clear this was a biker’s city. By the time we filtered onto the main drag, we were plunged into a mass of cyclists. At each intersection, cyclists would outnumber cars 20 to one. In Amsterdam, it seems bicycles are simply a way of life. Everyone from Bluetooth-laden business women to children on their way to school surrounded us, and for the first time I saw what a city can look like if designed around the bicycle. Amsterdam proves that bicycles can become the norm for intercity commuting.

I have heard talk of "bicycle friendly cities” – and even traveled to some like Denver and San Francisco – but once there, was always disappointed. It felt like bike paths were an afterthought; something put there to qualify their city as bicycle friendly but failing to actually be friendly to bicycles. In Amsterdam this is not the case. Rather, the city feels like bicycles have always been a matter of course. On every street there is a sidewalk, a bike lane and the road. At every intersection, there is a separate signal for pedestrians, bicycles and cars. Instead of being an addition to the city, bicycles simply are the city. It struck me as a place the rest of the world could learn a lot from and a place where bicycles were doing a lot of good. By the way, they even allowed electric bikes on all bike paths, and they were everywhere.

Our plan for breakfast was new and untested. We were going to try and pirate some unknowing hotel's continental breakfast. We pulled off the bike path in front of one of Amsterdam's flagship hotels, The Grand Amsterdam Hotel. We locked the bikes well out of sight of the front desk, pulled off our dirty Patagonia layers and donned our cleanest and mind you, only, collared shirts. All three of us took a moment to get in character and then marched in with what we hoped looked like an air of wealth and confidence. Apparently it worked because some minutes later, after sneaking past the hostess, we found ourselves sitting around a table, our plates brimming with bacon, eggs, muffins, Spanish jamón, fruit and potatoes. Although we were aware that one could interpret what we were doing as "stealing," we still enjoyed the meal thoroughly and had conversations about our rich father who is "currently chartering a boat through the Maldives" just loud enough so the tables immediately around us could hear. With our spirits high and our bellies full of good food for the first time in weeks, we set off into the streets of Amsterdam.

Our first stop was a Banksy museum where we enjoyed the works of one of the world’s most famous street artists. Next, we simply winded our way through the streets and over the canals of the city. Around every corner, one feels a deep sense of nostalgia. The streets are skinny and lined with tall brick buildings, book shops and cafes. It's almost like the whole place is eternally stuck at 3 p.m. on a crisp autumn afternoon in 1968. Truly enchanting.

By lunch, we found ourselves in a city park where we enjoyed some homemade sandwiches. Then Will and I, young enough for free entrance, ventured into the Amsterdam Museum of Modern Art. Inside, we were exposed to some of the most creative works I've seen and we both emerged with a new understanding of what art could be.

After a long day filled with much more stimulus than we were used to, we were tuckered out. We unrolled our pads in a park in Amsterdam's center surrounded by museums aptly named "Museum Park" and began cooking dinner. As we sat, people came and talked to us. We met some kids who dressed like they listened to punk rock and were on holiday from Poland. Then we spotted a group of girls close to us in age and plucked up the courage to sit down and start a conversation. We quickly bonded and discovered that the girls, who were on a school trip from Switzerland, were equally enthused by the city. As night fell, Will, Keenan, five Swiss girls and I began walking around the city and ended up admiring the architecture and enjoying the general feeling of the city till late at night.

Before going back to their hotel, the girls invited us to try and pose as a member of their class in order to get into a museum for free the next morning, and so to minimize the hassle of meeting them, we just decided to plop down our sleeping bags in one of Museum Park’s shadiest corners. Our thinking was, "It's already 3 a.m., how much can go wrong between now and tomorrow morning?" It turns out, a lot.\

I had been soundly asleep for exactly one hour when a jet of high pressure, very cold water sprayed squarely into my face. I quickly jumped up and clad only in boxer briefs slid my sleeping bag to safety. It turns out, the sprinklers in our part of the park went on at 4 a.m. Perfect.

Will and I tried to find a dry place safe from a further sprinkler cycle while Keenan, suspended from two trees in his hammock, simply resigned to his fate of being wet and just kept on trying to sleep as the sprinkler blasted him every 20 seconds. Finally, Will and I found a spot guaranteed to stay dry due to it being in the middle of a big bronze sculpture. We were fairly comfortable despite the pervasive smell of urine left from countless tourists before us. We began nodding off to sleep, but no more than 20 minutes later Keenan ran over to us with slight panic in his eyes. He said a police officer had just told him he needed to leave, and that we should probably pack up before he came back. So, at 5 a.m. after a mere one hour of sleep, we found ourselves riding our bikes away from the city center toward the park where we had slept the night before. All thoughts of the museum and Swiss girls were expelled from our brain, and all that remained was a deep craving for sleep. Finally, we found a grassy spot under an oak tree and slept unmolested till noon the next morning. After that, we packed up and rode south through an immense engineered forest designed to provide each of Amsterdam's citizens with at least 1 square meter of nature.

As I left the city I felt real sadness, as if leaving an old friend; but, like leaving a good friend, I was confident we would see each other again. The city had left a huge impression on me and remains the most beautiful and familiar city I have ever been to. For me, what set it apart was the character it so clearly possessed. Never have I experienced a place with such a powerful and accessible aesthetic, with such a consistency in texture. If you ever have the chance to visit, I give it the highest of recommendations, and if you need a guide, don't hesitate to invite me.