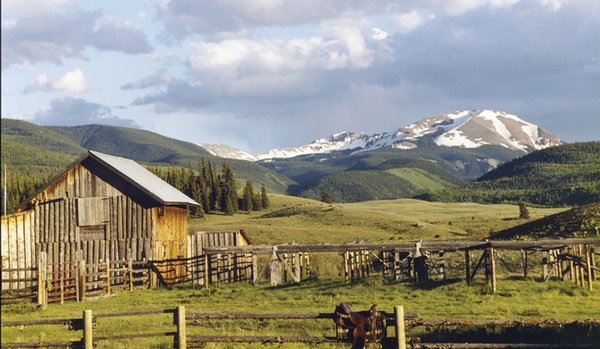 Pam Houston's ranch near Creede, complete with slightly leaning barn, serves as the inspiration and backdrop for her new memoir, Deep Creek. She will be at Maria's Bookshop next Tues., March 19, to sign copies and read from the book.

Celebrated author Pam Houston is no stranger to these parts. After all, she lives just over the Continental Divide in Creede, and her five previous books are popular both with critics and with local readers. But this Tues., March 19, is the first time she’s rolling into town with a memoir under her belt (and, more importantly, on bookshelves). She is holding a talk and booksigning at Maria’s Bookshop to celebrate the release of Deep Creek: Finding Hope in the High Country. 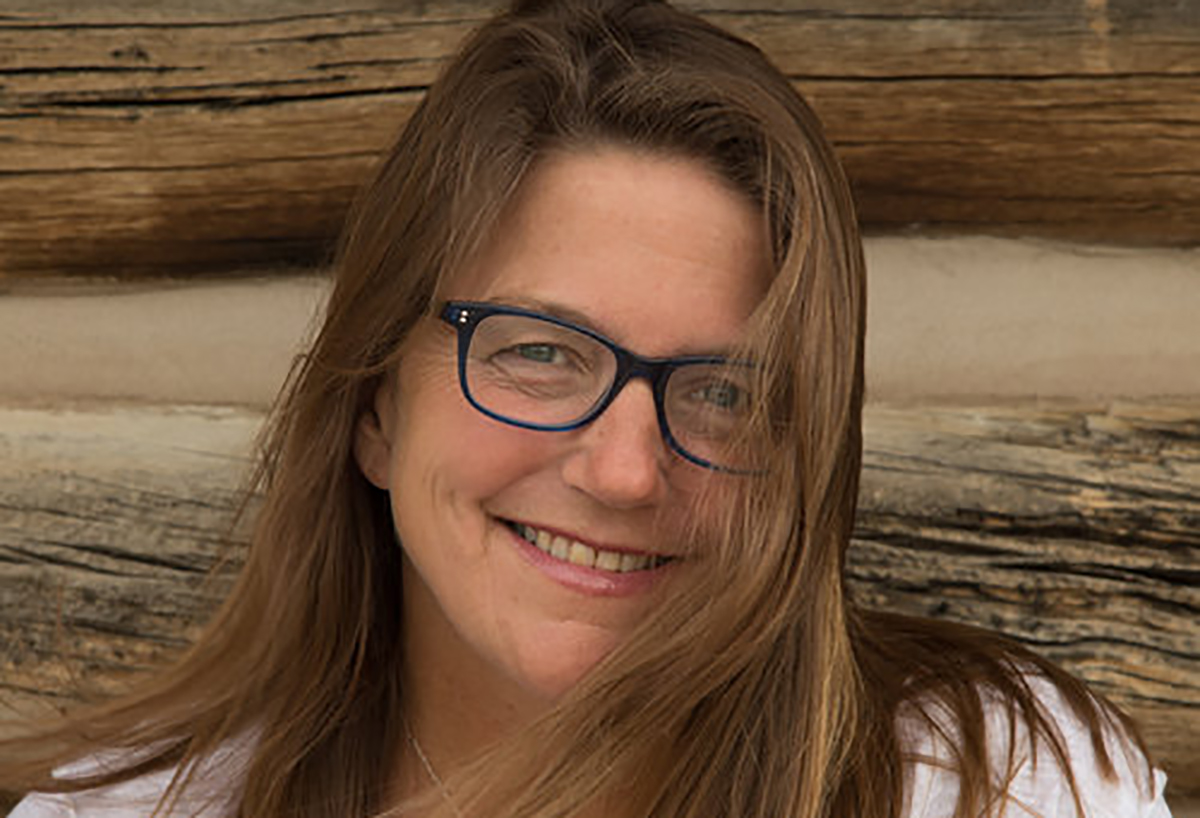 “It’s a book that is really wholly dedicated to Southwestern Colorado in so many ways,” Houston said in a phone interview. “A lot of events are going to be really familiar to people in the area, including the West Fork Fire, which plays a big role in the book. Also, just  what it’s like to live in the high country, and in the Southwestern Colorado high country in particular.”

Houston is widely recognized for her fiction, beginning with her first book, Cowboys Are My Weakness. She wrote that novel while in graduate school in her late twenties, during which time she also led a life more romantic to many of us than grad school: she guided river trips and hunting expeditions and generally spent as much time out of doors as possible.

Even after she sold Cowboys, she drove around the West and lived out of her Corolla with her dog, her North Face tent, and this idea that she needed to do something important with her $21,000 advance – which, her agent said, she ought not spend all on hiking boots.

“There is a hundred-year-old barn leaning slightly and a creek and a great big meadow,” Houston said. “Aspens and pines all around on the 12-thousand-foot peaks that surround it. My $21,000 represented just under five percent down of the asking price of this property, which I had no business even looking at.”

Yet the real estate guy had a hunch the widow selling the homestead would like the idea of Houston. Sure enough, she bought the ranch with her advance and a signed hardcover copy of Cowboys

Are My Weakness. And thus begins the story of a life told within Deep Creek.

Houston said she didn’t realize until she started writing this book about six years ago that buying her ranch was the greatest thing that ever happened to her. Of course, she found a location where she could both inspire and seclude herself as a creative person. But she also gave herself an immediate and pressing need to make her mortgage payments.

Not all 300 pages of the book take place on the ranch, though. And that is fitting, because Houston herself doesn’t spend all her days there. She counts herself as a teacher, first and foremost, and she teaches as a Professor of English at UC Davis two semesters a year and works with students at workshops and low-residency programs around the world.

This lifestyle suits Houston just fine. She recognizes the multiple facets of herself that cannot be sated at 9,000 feet. She likes sushi and art films and other delights of city life right alongside getting mud on her boots.

So this memoir takes readers along with Houston to other places. A boat in the Arctic among a migration of 800 narwhal. A bar in Pittsburgh. A childhood of vigilance. And it always brings readers back home with her – sometimes with a deep sense of comfort and belonging, and other times with intense anxiety, as when she returns home during the 2013 West Fork wildfires within sight of her windows.

Whatever the sense of each homecoming, Houston writes of her ranch with such familiarity that we join her in that sensation of dropping our bags at the door and greeting the Irish wolfhounds. The animals at this ranch  are written at least as vividly and distinctly as the fullest of the human characters. No chattel here – the half-wild cat, and the horses, and the chickens, and the Icelandic ram named Wooly Nelson who needs to be wrassled into the back of a 4Runner so he can be de-horned, are all fully-fleshed figures that don’t rely on stock assumptions about breeds and species.

“Animals are the center of my life,” Houston said. “I really believe that animals in general, and certainly dogs, know how to live and love better than we do. I say in this book, Fenton (one of the wolfhounds) had a wider range of emotion than anyone I dated in my twenties. That’s true. That’s on me, but that’s true. I don’t know if dogs have exactly the emotions and the intelligence we think they do, but they certainly have a wide range of emotion and intelligence. I know that from living with them.”

The stories in this book are patient and saturated; Houston had to learn that the action of memoir is different than the action of fiction. To stay committed to her truth, she had to wait for the meaning in her memories, her imagery, her metaphors, to complete itself and reveal itself. Yet they are still punctuated with moments of intense action, of wringing grief, of hair-trigger suspense, of wonder in every direction at what a human being is capable of.

Yes, through it all, like the sky through the trees, Houston finds hope. She’s lived on this homestead for 25 years now, and while Deep Creek took five of those years to write, in some sense, she’s been writing both the book and herself that whole time.

“I’ve been writing this book since I wrote the last word of Cowboys,” she said. “And even though I’ve written many books in between, this book is a talk-back to Cowboys. Whatever happened to that Cowboys girl? Well, here she is. Here she is after all this time, and hopefully she knows a little more. I have great love for that girl. That girl got me out West and got me out of a lot of trouble. So yeah, it took a long time.” 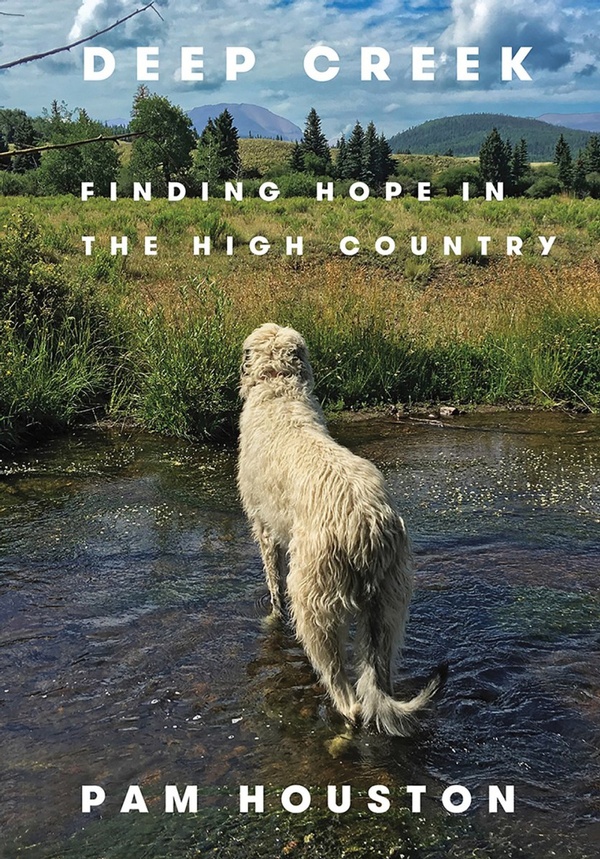