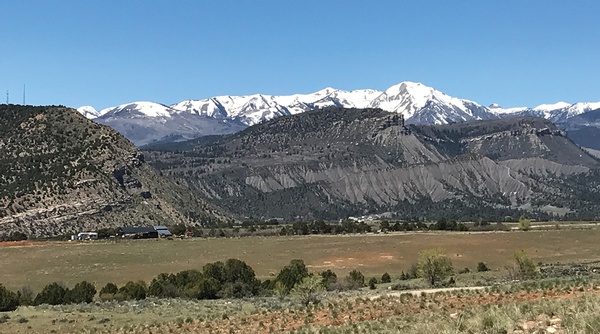 Durango Mesa will be home to hundreds of bikers next weekend during the Colorado League championships./Courtesy photo

While we’ve all been relieved to see rain the last few weeks, some of us have been a little more excited than others.

“Oh my lord, I was willing to do anything to make it rain,” Iron Horse Bicycle Classic Director Gaige Sippy said this week.

Now typically, Sippy would not be caught dead saying this sort of thing come late May. But he’s wearing a different bike helmet right now – that of race director for the 2018 Colorado League High School MTB Championships. Sponsored by the somewhat newly formed National Interscholastic Cycling Association (aka “NICA”), this be-all-end-all grand finale for Colorado high school shredders is coming to Durango for the first time ever the weekend of Oct. 19-21.

Dubbed the “Durango Mesa Pursuit,” the races will take place on Durango’s newest outdoor (*but yet to be opened to the public) venue, formerly known as Ewing Mesa. Sippy, along with the help of Trails 2000, Durango Devo, the City of Durango, the Katz family and a slew of others, began preparing for the races more than a year ago. With a blank slate, they built 4 miles of trail to link into the existing Carbon Junction Trail for a kickass race loop.

The thought last fall was, build the trails, let them rest under a blanket of snow over the winter, and voila! Come summer, all the loose sand and bumps characteristic of a new trail would be magically condensed into sweet, buff singletrack. But, as we all know, Mother Nature had different plans. The snow and rains never came and, up until a few weeks ago, the track was a bit, shall we say, rough.

Naturally, organizers have been a bit nervous. See, not only are they expecting upwards of 2,000 folks – some of whom likely have never set foot south of I-70 – but getting NICA to even consider Durango in the first place was a bit of an uphill slog.

Mountain bike coach Sarah Tescher put the bug in the NICA powers that be ears back when the organization first started in 2010. Sippy took up the cause in earnest in 2016, with plenty of ammunition. Not only do Durango kids rule in the mountain biking department, he reasoned, but participation is rising across the region. Sippy estimates there are some 700-800 kids participating in the Colorado League’s Southern Tier (it’s grouped into north and south) – with new teams forming in Cortez, Pagosa and Taos (which technically isn’t in Colorado but they race here anyway since there is no New Mexico league.)

Not only that, but – as any Durango parent with a kid in sports knows – Durango kids travel. A lot. Maybe it was time to share the mileage load, Sippy suggested.

“Durango kids have traveled to these races since 2010,” he said. “They get home at midnight on a Sunday and get up and go to school the next day.”

And last but not least in his argument: if there’s one thing Durango knows how to do, it’s put on a bike race. Not only that, but in Durango Mesa we have the perfect venue – something the Colorado League has beenstruggling to keep pace with since its numbers exploded tenfold in its first eight years. Every time Sippy saw the state’s NICA Director Kate Rau, he reminder her of this. “I told her it was time to get this to Durango,” he said.

Eventually his persistence paid off – the stars aligned and Durango got the official word last fall.

From there, it’s been a monumental push to get ready – an effort Sippy says would not have been possible without help from everyone from law enforcement and city big wigs to Devo families, sponsors and good-hearted, dirt-loving volunteers. And of course, the Katz family.

“The Katz family has been integral, the race would not have been able to come here without their help,” Sippy said.

And speaking of the Katzes, the Durango Mesa land is still under their private ownership. As such, folks are kindly asked not to ride the trails until they are officially opened for public consumption at a later date. (We know it’s tempting, but there are a bazillion other trails to ride on ‘til then.)

“It’s not a new trail system that can be used by the public at this point,” said Sippy (who referred to the trail difficulty as a “light blue” on the Durango scale.) “We need to be sensitive about respecting private property.”

But just because the area is off limits to riding for now doesn’t mean folks aren’t more than welcome to come up and watch the races next weekend and get a sneak peek. In fact, Sippy and other organizers hope they do.

“People can check out what Durango Mesa looks like and what the future can hold,” Sippy said. “The potential for large outdoor events that could happen up there is incredible.”

Perhaps more than that, though, he just wants the local community to get psyched about mountain biking and supporting the local kids.

“The NICA races are the best vibe I’ve seen,” he said. “We just want folks to come out. Once they do, the enthusiasm is pretty infectious.”

And who knows? Maybe that infectiousness will rub off on everyone else, too – even after a long drive.

“We would like to be a stop on the league’s schedule every year,” Sippy said. “After all, it’s the same distance from Denver to Durango as it is from Durango to Denver.”

Volunteers are still needed in a variety of capacities for the Durango Mesa Pursuit. To sign up, go to: durangodevo.com. For a full race schedule, go to: coloradomtb.org/