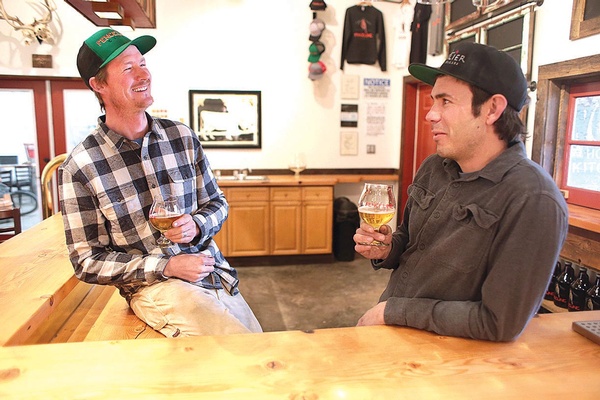 Outlier Cellars' owners, Sam Perry, left, and Neal Wight, right, partake in another grueling sampling session inside their new taproom in Mancos. They went into business a year ago and are now ready for the prime time, with a grand opening this Saturday./Photos by Jennaye Derge

With hard cider becoming the gluten-free darling of the craft beverage crowd, the idea to start a cidery in Southwest Colorado seems ripe for the picking. Which is why Mancos residents, college buddies and apple connoisseurs, Sam Perry and Neal Wight, have decided to jump on the cider wagon. This weekend, with the grand opening of their Outlier Cellars taproom in Mancos, they become the second cidery (after Dolores’ Teal Cidery) to open in the area.

And it couldn’t come a moment too soon. According to the Neilsen Company and the U.S. Association of Cider Makers, craft cider consumption grew by a whopping 39 percent from 2015-16. Colorado leads the pack in that consumption as the state with the fastest-growing population of cider drinkers. In fact, craft cider sales in the state made up more than 20 percent of total cider sales in 2017 (for which we have millennials to mostly thank, lest you need to be told.)

But rest assured, these two did not just fall off the apple truck. They have been carefully curating apples and concocting ciders to share with friends for the past 31⁄2 years. However, as they tell it, their shared fascination with all things apple and fermenting stems all the way back to their college days, 18 years ago in Prescott, Ariz.

It was here that they met apple geneticist Kanin Routson, who would take Perry out on tree-grafting jaunts all over the Colorado Plateau and beyond. They would find heirloom trees and snip samples to clone in order to discover different varieties that were suited to various areas. These expeditions piqued Perry’s apple interests enough for him to move to Mancos and plant his own orchard.

As for Wight, you could say fermenting is in his blood. He grew up in California’s wine country with a family background in wine and vineyards.

In fact, the two admit stating the business was like destiny. But fate didn’t officially align until a wedding four years ago in Arizona. Routson, the apple geneticist, had whipped up a large batch of cider for guests. When Perry and Wight tasted it, the ideas began bubbling.

“It was awesome, and we just started to talk about it from that point on,” Perry said.

Curiously enough – or perhaps not, since both deal with fermented fruit – Outlier’s roots extend to Sutcliffe Vineyards, in nearby McElmo Canyon. Sutcliffe winemaker Joe Buckel assisted the duo with fermentations and recipes that helped create Outliers’ signature beverage, Fenceline Cider, made with apples from local heritage apples. Buckel, who was a previous partner in Outlier, has since moved on to other projects in the area, leaving Perry and Wight at the reigns of the now one-year-old Outlier Cellars.

The new taproom is located downtown next to the Mancos River in an old cabinet shop that had been sitting empty for about two years. The building is large enough to house tables, a large bar and the in-house fermentation tanks. Outside, there’s enough space for a patio, and plans call for food trucks to be rolling in

come summertime for those who want to sip a cold one under blue skies.

The back room, though, is where the real alchemy happens. This is where Jarred Scott helps create the cider purely by trained palate.

“I like to identify the apples, find out what qualities they have and how they contribute to the cider,” he said.

But it’s a lot more complicated than just picking apples off trees and throwing them in tanks. It takes a special sort of cider-specific apple, much like wine-specific grapes, and a whole lot of trial and error.

Scott, who began fermenting four years ago at Teal Cider, said the owners there experimented all the time. Once, they made 18 separate batches at different temperatures and brought in friends to sample which tasted best. Generally speaking, wine and beer do better with warm fermentation because of the yeasts used and the faster pace of fermenting. But cider tends to be better with cold fermentation, which takes longer. After what had to have been a very fun taste test, their friends agreed – cold fermentation did indeed taste better. And with that conclusion, Outlier has also gone cold.

Teal Cider has been a close friend and partner to Outlier Cellars throughout their journey, helping the company open up as well as learn the ins and outs of fermentation. Through his experience with Teal, Scott became familiarize with the types and tastes of apples in the area. He said russet apples are the most popular, though he often blends different varieties in each recipe. Through his years of toiling over a (cold) vat, he has also gained an understanding of the chemistry of apples and how to find that perfect balance between acidity, sweetness and tannins.

“It’s been a hobby, mostly a passion and personal interest,” Scott said.

The requirements to ferment cider are few, besides having to obtain a very elusive winery license that Wight said was one of the more difficult things the company had to deal with. In all, it mostly takes time, passion and friends to help you along the way. Oh, and some stout livers.

“Our backgrounds are in heavy drinking,” Perry joked.

In addition to cider, Outlier Cellars also makes a couple varieties of wine and there are even whispers of sake or other fruit fermentations in the future.

But for now, the taproom has plenty to offer with 12 taps open for ciders, including their flagship cider, Fenceline; reserve ciders made from special varietals; as well as rotating small-batch ciders. There will even be a few taps reserved for visiting ciders. The goal, Perry says, is to bring people into the taproom to try specialty ciders not available elsewhere.

“We hope to keep evolving and keep making better and better cider and put this place on the map as a national recognized cider region,” Perry said.

The taproom officially puts itself on the map and opens to the public on Sat., Feb. 24, and is throwing a party to go along. The evening includes live music from the Afrobeatniks, pizza from Sweetwater Gypsies in Dolores, local wines, and plenty of cider. 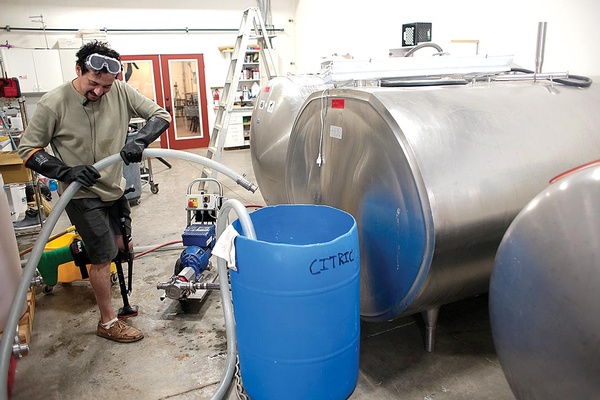 Jarred Scott mans the cider vats. While not as glamorous as the front of house, this is where the real magic happens./Photos by Jennaye Derge 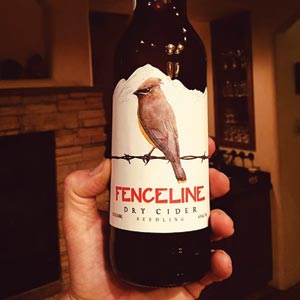 A few things you probably never knew about hard cider (but it’s OK to ask):

1. It was the drink of pilgrims - Cider was the most popular drink in North America and England from early settlers’ times. 2. Cider can be aged (but be careful) - A well-made bottle-conditioned cider can be kept for years but gets drier as time goes on. Be warned: most commercial ciders are either sterile-conditioned or pasteurized with a shelf life of two years, so aging them will probably yield vinegar.

3. Barrel-aged cider is a thing – A variety of barrels such as red wine, American oak, French oak and bourbon are used in high-end ciders.

4. When at war, people drank cider - Frequently, the UK was at war with their main wine suppliers like France and Portugal, meaning shipments of wine were hard to come by. As an alternative, folks drank Perry (pear cider) as a substitute.

5. Eating a cider apple is not advised – Biting into a cider fruit has been likened to eating a number of teabags at once. However, crushing the fruit brings out a tart, dry sweetness, making for excellent cider. 6. Cider is typically drunk warm – Just like with beer, drinking cider ice-cold isn’t always best. In fact, the suggested way to drink it is out of the cask, where it’s closer to room temperature to bring out all its flavors.