Into the deep
Durango's king of the underworld 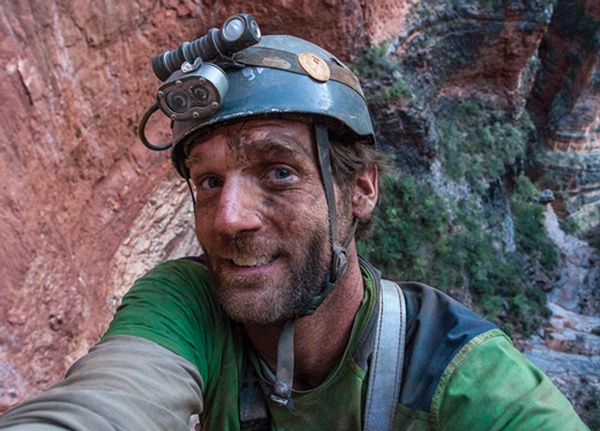 Steve Eginoire snaps a selfie after emerging from another epic subterranean trip in the Grand Canyon in September.

We’ve all heard of the man cave. That modern phenomenon of male refuge resplendent with sports memorabilia, big-screen TV, comfy couch, surround sound, mini fridge or, if you’re really deluxe, a kegerator. But for local photographer and adventurer extraordinaire Stephen Eginoire, the man cave takes on a whole new meaning.

Instead of the trappings of modern life, his preferred man cave is, well, an actual hole in the ground. And instead of being decorated with beloved sports jerseys, it’s adorned with such specialties as eyeless albino fish, spiders, poisonous scorpions, mummified sloths and 200-foot piles of bat guano.

While this may sound like more of a nightmare, to Eginoire it is heaven on earth – or rather, below earth.

“It’s like a huge treasure trove,” the 36-year-old Fort Lewis College graduate said. “When you enter a virgin cave, you’re seeing something that’s never been seen before. It’s pretty awesome.”

In the most basic terms, Eginoire is a spelunker, although most modern-day cave aficionados prefer the more dignified “caver” – much in the way a Cordon Bleu-trained chef bristles at the term “cook.” But Eginoire doesn’t mind the designation. It’s all about the brother-and sister-hood of the underground, and everyone’s got to start some- where. Even worldclass cavers like himself.

For Eginoire, it all started more than a decade ago when a friend, Pete Tschannen, took him to Groaning Cave in
northcentral Colorado. Needless to say, this first foray was enough to render his hereto-fore superficial mind blown.

“I thought, ‘this is something I’m going to pursue,’” he recalled. “I didn’t realize it would turn into what it has.”

Today, that wide-eyed twentysomething who started with friends “going underground and looking at stuff” has joined an elite group that has plumbed the wondrous depths of the Earth’s belly, frolicked in Hades’ play-ground and explored the world’s final frontier.

If it all sounds dramatic, well, it kind of is – and Eginoire has the photos of otherworldly landscapes to prove it. Astute readers of the Telegraph may remember these photos when Eginoire was head photographer from 2008-14 psychedelic formations, towering stalactites, sculpted flowstone, aragonite crystals, delicate gypsum flowers and other sights rarely seen by human eyes. 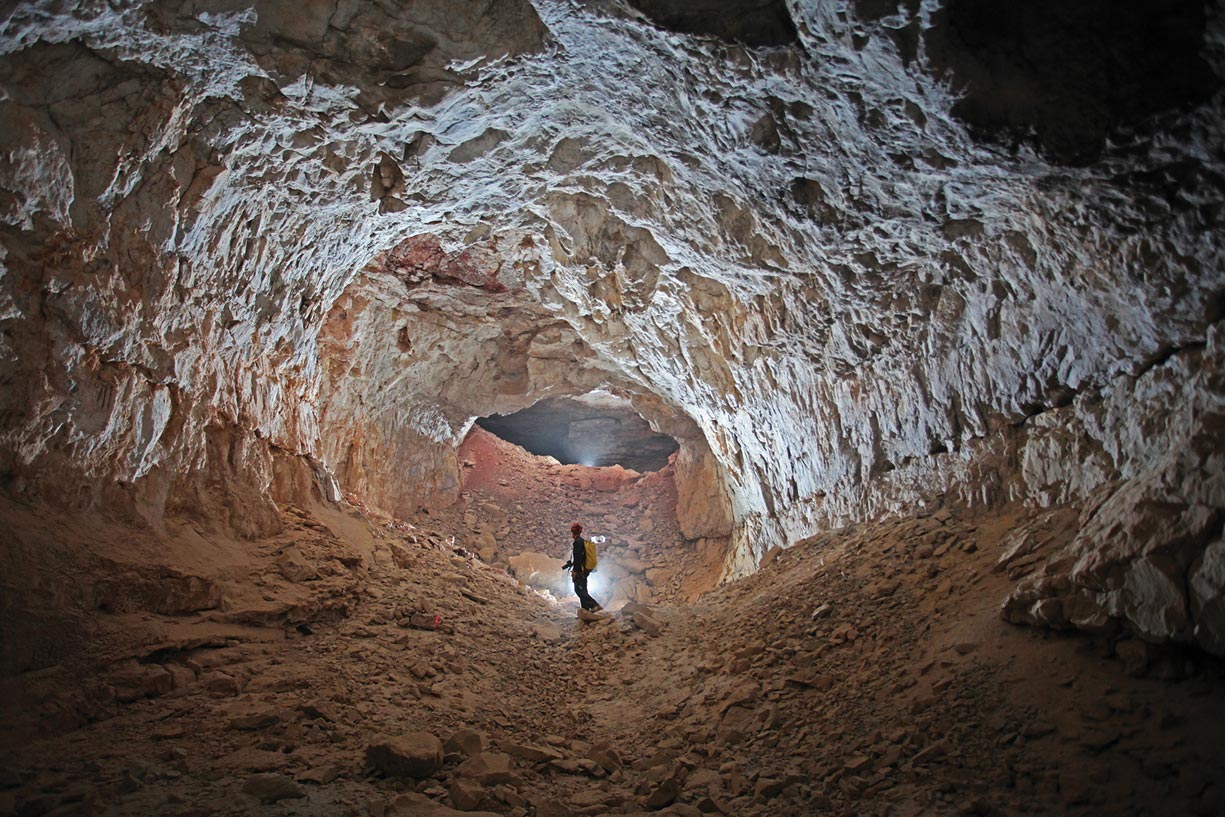 A virgin passage discovered last fall in the Grand Canyon. Local Steve Eginoire has been part of a pioneering team with a special permit from the Parks Service to explore and map the park’s labyrinth of caves./Photos by Steve Eginoire

Among his subterranean feats is helping set a world depth record in 2013 for the deepest cave navigated in the Western Hemisphere: Mexico’s Sistema Huautla. Eginoire, along with Tschannen, were part of a 40-person international expedition that pushed the cave deeper than its previous low-point. Known to be the 9th-deepest in the world, they got to a depth of 5,069 feet – or a little less than a vertical mile. A few years later, Eginoire returned, this time to rig ropes so a team of scuba divers could explore where tierra firma gave way to agua fria.

But, just as climbers want to go higher, cavers want to go deeper. So, eventually Eginoire set his sights on the Grand Canyon. It is important to interject here that willy nilly caving in the national park is illegal, not to mention extremely foolhardy. Although the Grand Canyon is home to a massive labyrinth of caves, most are unexplored and extremely technical, so even if you did survive, the Park Service would likely bust you. It’s not so much that the NPS wants to save you from yourself as the caves are an extremely fragile ecosystem unsullied by human touch.

“The caves are a super sensitive resource,” said Eginoire. “With zero percent humidity, everything is incredibly well preserved – paintings, intact pots, phenomenal artifacts that were left there 2,000 years ago.” But, there is a down side to bearing witness to such history. “You can’t go in and not have an impact. Once you leave that first footprint, that place is changed forever.”

However, there are a few lucky (and willing) souls who have been entrusted with a special permit from the NPS to explore, map and catalog the contents of the park’s massive cave systems. The mastermind behind this effort is Californian Jason Ballensky – a sort of caver demigod. When Eginoire heard of the work Ballensky was doing in the Grand Canyon, he decided to throw caution to the wind and offer up his services.

“I straight up called him because I absolutely love it there and love caving,” Eginoire said. “I was nervous because I thought everyone wanted to go caving.”

Fortunately, as it turns out, most everyone’s idea of a good time does not involve navigating dark, dank underground passages. “I got invited on a trip, and it went pretty well,” said Eginoire, “and I went on a few more.” The rest, as they say, is history – or history in the making. Just last month, Eginoire accompanied Ballensky and his team on a groundbreaking (if you’ll pardon the pun) mission to the park. Again, all locations are kept top-secret to protect the caves and in keeping with the caver’s code of conduct. In other words, he could tell you but then he’d have to kill you.

The 12-person crew spent two days hiking to the destination and seven days underground mapping. When all was said and done, the mission was successful – finding and mapping a connection between two cave systems. In all, there are five entrances with over 30 miles of explored passage in between.

With no GPS service underground, surveying is an arduous process. “Everything is hand-measured with lasers,” Eginoire said. Coordinates are then painstakingly entered into a notebook, cross-checked for accuracy and upon resurfacing, the 300 pages of data are entered into a computer. In this case, all the data was handed over to the Park Service, along with Eginoire’s photos (not even National Geographic could have a peek.)

Surveying isn’t the only tedious part of the process. In addition to having to navigate steep, loose scree slopes and high-angle rappels, great attention must be paid to leaving no trace in the pristine environment. “One crumb can turn into insane mold,” said Eginoire.

As a result, a Tyvek groundcloth is used when eating, and every-thing that goes into the cave comes out. Yep, everything. “It’s pretty obvious you don’t want to eff it up. One little bread crumb will be there forever,” he said.

“It’s called ‘rapture of the deep,’” said Eginoire, who has never suffered from the telltale disorientation brought on by sensory deprivation. But he’s seen people who have. “One night in Mexico, we were all sleeping, it was pitch black and a guy in our group starts screaming, ‘is anybody there?’”

Fortunately, they were able to talk him down, but yes, from time to time, things can go wrong. Like the time he and a partner spent 16 hours establishing a route down a 1,000-foot vertical shaft only to find on the last big drop they didn’t have enough rope. “The rest of our stuff was 700 feet above us,” he said. “Luckily we had some candles and we had to sleep on a muddy ledge getting splashed by water all night.”

Speaking of night, it is, of course, a relative term – there is no “night” underground. Or rather, it’s always night. But to wriggle through a tight spot, only to pop out the other side into a cathedral-like geologic wonderland makes it all worth it. “It’s cool to be on the tip of the spear exploring things that have never been seen before,” he said. “We know more about what’s on the surface of Mars than we do what’s under the Earth.”

But then again, popping back out into daylight after seven days in the hole is also quite awesome – if not a bit discombobulating. Eginoire recounted a time he resurfaced at night and mistook the distant lights of a Mexican village as the headlamps of other cavers. “I thought ‘holy shit, look at all these cavers.’”

But then the smell of ozone, dirt and life hit his nostrils and filled his lungs once again.

“It’s so amazing, everything is teeming with life on the surface. It’s like ‘Fern Gully,’” he said. “Above ground is pretty cool, too. It’s hard to say which one I like better.” 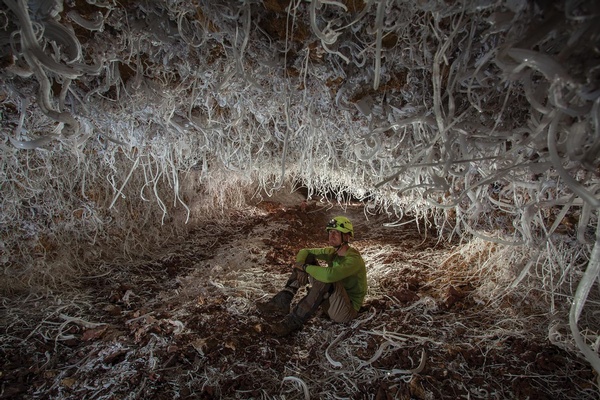 Above: A caver no doubt ponders deep thoughts surrounded by countless "gypsum flowers" in a delicate cave in the Grand Canyon.