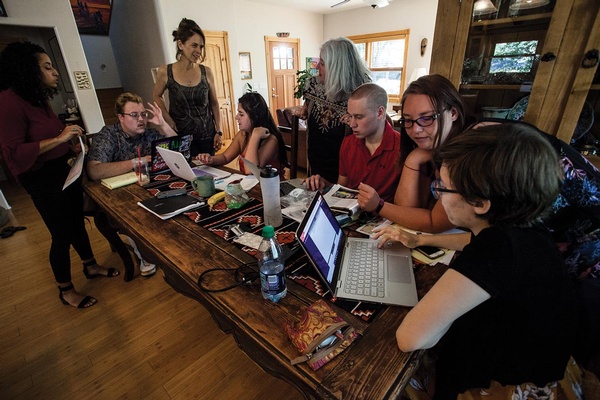 Members of the Durango PlayFest organizing committee gather for some last- minute preparations./Photo by Stephen Eginoire

For five days this August, Durango will be the site of “PlayFest,” billed as the first American theatre festival in Southwest Colorado. Actors Wendie Malick and Dan Lauria, no strangers to town (“The Guys” and “Love Letters”), inspired a small group of local performing arts lovers to start the local theatre festival. Lauria acknowledged that the idea grew out of admiration for The Eugene O’Neill Theater Center’s National Playwrights Conference in Waterford, Conn. – a program of public, staged, script-in-hand readings.

The O’Neill program, a model for new play development, established an industry standard that is now seen in theaters around the world. The objective is to provide a supportive space for playwrights to develop new work in conjunction with seasoned actors and directors. With Durango’s tourism hurt by fires, drought and toxic spills, it is hoped the PlayFest will grow to be a new summer economic driver for the area.

“In light of recent events and what our community has gone through, it is more important than ever that we present an exciting festival that will bring audiences and visitors to our community to celebrate the creative process of bringing a new play to life,” Christina Erteszek, chairwoman of the PlayFest Advisory Committee, said. “We need to increase our community’s number of visitor attractions and this festival will help accomplish that.”

As conceived, the festival will also offer opportunities for locals to engage the visiting artists through panels, social gatherings, performances and post-show talkbacks. The 10-member advisory committee hopes to make Durango a home for new theatrical work and that the festival will be a benchmark for an emerging voice in American Theatre.

“The playwright is coming to Durango to get (their play) on its feet with experienced actors,” Festival Director Felicia Lans- bury Meyer explained. “To hear it; try things, change things.”

Lansbury Meyer also teaches for the Fort Lewis College Theatre Department. As a result, PlayFest is working in collaboration with FLC to give four student interns the chance to experience real-world challenges in theater problem-solving, networking and management skills. In addition, recent FLC Theatre graduate Jake Yost will have his play included in the final reading lineup. You may know him from his roles as the Wizard in “The Wizard of Oz” and the Strater’s annual “Rocky in Rocky Horror Picture Show.” His play, titled “Standby to Standby,” was written for Yost’s senior seminar project and reflects some of his experiences as a five-year Navy veteran.

The festival is drawing other big names in national theatre as well, such as Mike Farrell, best known as Captain B.J. Hunnicutt from “M*A*S*H,” and Laura Spencer (“Bones,” “The Big Bang Theory”). Also on the roster is Pulitzer, Tony and Olivier award-winning playwright Lee Blessing, whom Lauria referred to as “one of the greatest American playwrights.” And Lauria would know, having appeared in Blessing’s “The Winning Streak” (2005).

Directing the readings of the newly developed works will be Jeni Mahoney, Christy Montour-Larson, Ian Belknap and local Daniel Sullivan.

“It is so wonderful to have the play-wright in the room to ask questions and make sure that we are all making the right choices to support them,” Montour-Larson said of the opportunity. “And it is thrilling to be a part of something that is just beginning. We need new plays now more than ever.”

Montour-Larson has directed Blessing plays in the past and will be working with him during PlayFest on his “A Body of Water.” She concurs with Lauria’s assessment of the playright. “Lee Blessing is, in my opinion, the best-kept secret in American theatre. He has written more plays than Shakespeare and is produced all over the country.”

Outside of the actual play readings themselves, there will be opportunities for the public to get up close and personal with the directors, actors and writers. On Tues., Aug. 7, 7, a Playwrights Panel with Lee Blessing, Stephen Nathan and Emily Dendinger on "The Art of Storytelling," will take place at the R. Space (734 E. 2nd Ave.) On Wed., Aug. 8, Lauria will moderate a program titled “Appreciation of Acting,” illustrated with clips from films and some engaging stories, one of which recalls his breakfast with Hollywood legend Cary Grant. Both events are free to the public upon pre-registration.

There will be a festival party Thurs., Aug. 9, at the Rochester Hotel’s Secret Garden, with music by the Jeff Solon duo, appetizers and a cash bar. It is a chance for locals to mingle with the artists.

The readings, which will be open to the public, begin Fri., Aug. 10. Selecting the plays was a collaborative process, and Lansbury Meyer said Lauria was a huge help. Theater people, being a close-knit community, often know each other, and once the PlayFest ball got rolling, friends and colleagues were invited to participate. “(Lauria) knows Lee (Blessing), and once Lee agreed to come, we knew we were off to a great start!” she said.

Likewise, a friend of hers at The Acting Company, in New York, Ian Belknap, worked to find an emerging writer. “And that’s how we found Emily Dendinger,” she said.

In addition, playwright Nathan, who will be presenting his play “The Dizziness of Freedom,” had a role in bringing Farrell to the fest. Having done a table read with him a while back, Nathan suggested the actor join him in Durango. Farrell enthusiastically accepted. “It’s fun to be able to try things out in front of an audience; to see what works and what doesn’t work,” Farrell said.

Keeping in mind the economic strain on our community as a result of the 416 Fire and drought, getting tourists back to our hamlet is of paramount importance. To that end Lansbury Meyer mused, “We get to show off Durango to a whole host of new people, and our community has the opportunity to experience the creative process, as professional artists come together in this beautiful place to work on new plays and learn to love Durango as we do!”

For the full schedule of events, ticket information, play descriptions and locations of the readings, go to: www.durangoplayfest.com.