Let the good times roll
When it comes to fun on wheels, the Snowdown Parade goes the distance 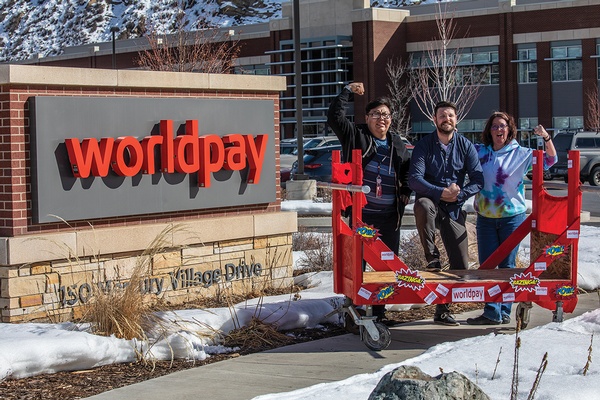 The World Pay team strikes a pose to intimidate any would-be competitors in front of its custom race bed. After snoozing for a few years, the Snowdown bed races are back, this time as a warm-up for Friday night's Light Parade./Photo by Stephen Eginoire

Brush out the wigs! Fill the squirt guns! Ignite The Firework! Let mayhem ensue! The 41st annual Snowdown, Durango’s Winter WOAH-lympics of All Things Weird and Wacky, has finally arrived, ushering in a communitywide excuse to dance without pants, arm wrestle, carve Spam, make fun of local politics, put your cat in a clown suit, build a bong, and play putt-putt at Durango’s finest drinking establishments.

Of the roughly 150 events taking place between Jan. 30 – Feb. 3, only one draws the gaze of 20,000 eyeballs. Only one requires multiple hours of safety meetings with the City. And only one has a trophy honoring what we all think when we see a hairy adult stumbling down Main Ave. wielding a trident, dressed in cape and banana hammock.

If you guessed the Snowdown Light Parade, you guessed correctly on the first of hundreds of trivia questions that will soon be thrown about like shrapnel from a snowblower. And, if you also guessed the trophy as Best “What the *%&# was That?” Float, you might as well hang up your thinking cap, er, cape and get back to champagne pong practice.

Of the 10 trophies that dozens of illuminated floats compete for (or don’t), the Best “What the *%&# was That?” Float is at the very least, curious, won by only the most surprising entrants. Like, for instance, the legendary Durango Freestyle Wheelbarrow Team, which has earned the novel WTFWT title multiple years since it first coalesced in 2010. This gathering of about a dozen wheelbarrow owners was their attempt to create a sport without overthinking it. No uniforms. No rules. No fuss. Just wheelbarrows. And beer. Always beer.

“We’re not just the only precision wheelbarrow team in the nation; we’re the best,” DFWT member and owner of Maria’s Bookshop, Peter Schertz, says. “We challenge anyone to out-wheelbarrow us.”

This might be easier than it sounds, considering the team practices their parkour a whole one time a year on the Wednesday before the parade. Everyone has their own best trick, explains Schertz, from crowd pleasers like “The Spin,” to dangerous acrobatic balancing, like a group pyramid. Team member Tom Bartels pushes his wheelbarrow while sitting atop a unicycle, and others send sparks a-flyin’ on skis or skateboards. “We carry ramps with us and get a few people to lay down in the street. Then we’ll jump over them and hope for the best,” says Schertz.

Safety record, you wonder? The team boasts “some pretty good accidents” and “a fair amount of post-Parade limping.” They sometimes talk about how they “should wear helmets.” Kids, we are not condoning these knuckleheads and their knucklehead decision-making. In fact, we find them to be too distracted with another critical element of their overall health: hydration. The DFWT never worries about thirst, thanks in large part to the DFWT’s biggest and only sponsor, Ska Brewing.

While the DFWT shines up rusty axles and smacks on fresh Ska stickers in time for the parade, one more group will be busy tightening screws on yet another every-day item that adults in this town have turned into sports gear: the bed. That’s right. The same thing you lay your head down on at night and pray that one day you’ll grow up to be just like your parkour-slap-happy Dad.

As many Durango traditions begin, the beloved Bed Races hold lore at Fort Lewis College, where a 1965 yearbook reveals the first photos of students in penny loafers pushing wobbly hospital beds down the hairpin curves of E. 8th Avenue. The sport was part of the Heart Fund, a Snowdown-esque tradition that involved friendly contests, like tug-o-wars and dance-offs, to raise money for needy causes in the region. The Bed Races were scooped up in 1978 by Terry Fiedler and company, founders of Snowdown.

After a hiatus, the Bed Races are back on much flatter ground in downtown Durango as a pre-Parade attraction. Chip Lile, Snowdown president and parade coordinator, says that Main Avenue sits empty for a couple hours before the parade. The Bed Races will post up with starting lines in the 700 block, utilizing the space and hopefully getting more people downtown earlier.

“Our version hopefully won’t pose too much of a  safety hazard to racers but will provide a super fun, action-packed event that the whole community can enjoy,” Bed Races organizer Tracy Barnes says.

A former Olympic biathlon athlete, Barnes isn’t new to competition, much less bed racing. She’s participated in “several” BR’s across the country and sees the Bed Races as putting the “fun” in fundraising, with all proceeds going to the Durango 100 Club, a nonprofit that supports first responders and their families.

In lieu of rickety wire frames, Barnes’ father, Thad Barnes, owner of Elk Run Builders, built nine wooden beds for the event. Even with his construction team helping, it took a week to fashion the beds that Barnes believes are designed to “withstand a hurricane.” Each bed sits on sizable caster wheels and has been tested and approved in snowy, icy conditions.

Sponsors decorate the beds, which are shared by 24 five-person teams. Beginning at 4 p.m. on Friday, four races will launch on Main, two races heading north, and two barreling south. With four people posted at each corner of a bed, one person in a onesie holds on for dear life as the bed takes on a real-life Bedknobs & Broomsticks moment. The only hocus-pocus happens at the turnaround point, when onesie-wearers trade their outfit with a bed pusher.

“This is where the race is won or lost,” surmises Barnes. “There’s a technique for exchanging onesies without getting your foot hung up. Whoever figures that out will probably win.”

Before the final round, a high-stakes race between the fire and police departments and City Council and county commissioners will take place. Winners will receive the superfluous funds floating in robust public coffers, says no one.

With beds and barrows greased, the crowds should be thickening as day turns to dusk. At the stroke of 18:00 precisely, the lone Snowdown Firework will fire over the west of town, a stunt that’s mostly economical but certainly comical, says Lile. With that crack of flame and color, parade floats flick on the lights and the largest assembly of people in the Four Corners commences.

After the first wave of amblers oozes across College and into procession, the sounds of trumpets and cymbals waft onto the street like beignet scents on Bourbon Street, as the Hill Stompers, a Los Alamosbased jazzy street band of roughly 40 members, begins its theatrical mobile concert and dance party.

Led by nuclear engineer Jeff Favorite and his snare drum, the Hill Stompers formed in 2000 and have been playing in the Snowdown Light Parade since 2004, the year of Yabba Dabba Doorango. Their Mardi Gras style fills the ghost shoes of the Good Times Marching Band, which played in the first parade back in 1979.

Favorite’s the guy running around in circles doling out high fives to spectators. Despite this marking their 16th year playing in the parade, the Hill Stompers have never won a parade trophy. This year, judges might perk up when they hear the setlist, which includes cartoon sitcom theme songs and a rousing version of “The Bare Necessities.”

“All of Snowdown is wacky, but I love most the bustle that precedes the Snowdown

Parade when we’re all mustering,” says Favorite. “We love how enthusiastically welcoming Durango is to our band. We always feel like rockstars.”

Perhaps they feel like rockstars because this explosive ensemble seems to be born for Durango’s “cabin fever reliever,” embodying the very soul of Snowdown, which is to not take ourselves so seriously and embrace the weird and wacky in us all.

After all, Snowdown, at its core, is a time for parents to tap their inner 8-year-old selves and let their hair down, and for children to wonder why 360 days out of the year, these same humans are telling them to mind their manners, stay in school and act their age.

But, kids, here’s a lesson about the circle of life: you must go through a period of maturation before you can fully appreciate the necessity of a costume box or the magic of an everyday item, like, say, a wheelbarrow or a bed. Because no matter how cool your phone, Tesla or drone is, there’s nothing like the simple joy found in connecting with a neighbor through a monster suit, over shots of tequila and fist bumps to the glorious return of winter. 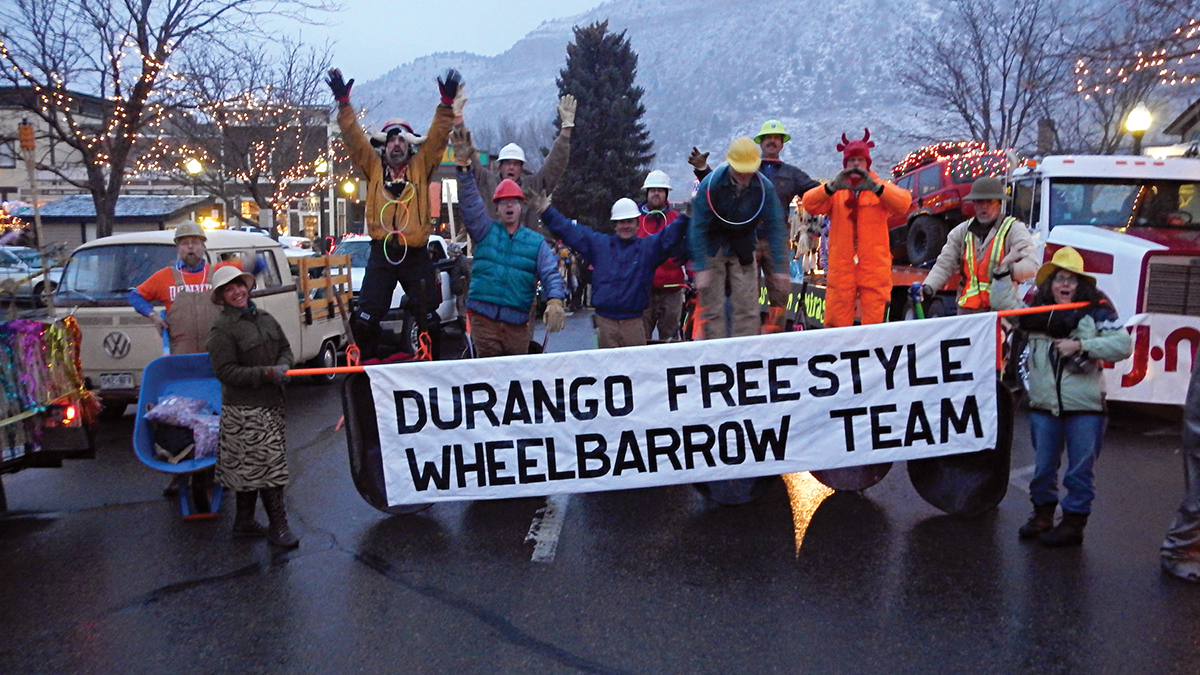 Durango’s esteemed Freestyle Wheelbarrow Team, multiple recipient of the WTFWT award, will once again attempt to wow spectators with its daring display of back- yard prowess and mind-boggling hydration capabilities./Courtesy photo 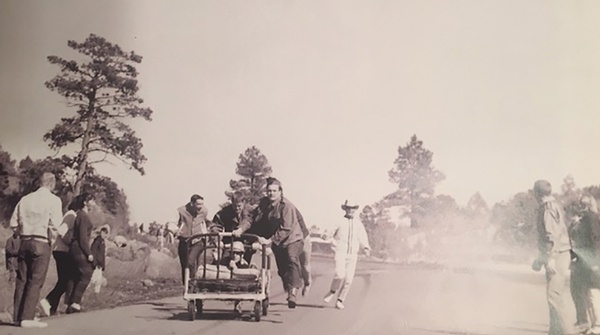 Archival photo of the original (and presumably much sketchier) bed races on Fort Lewis College's front hill circa 1965./Courtesy photo