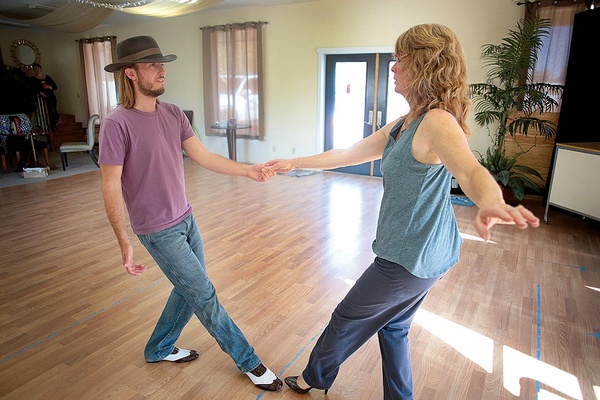 Sally Zabriskie and the Telegraph's own Zach Hively bust a move during practice recently at Groove U Dance Studio. The two will dazzle us with their moves at the Strater on Sat., May 6./ Photos by Jennaye Derge

On Sat., May 6, the stars will shine and shimmy in the Durango dusk. Only these ain’t your humdrum hydrogen fireballs. These are your neighbors, doctors, bankers, principals, contractors, artists and favorite newspaper columnists, all joining forces to stage the fourth annual Dancing with the Durango Stars at the Strater Theatre.

The event is much like the famed TV show of a similar name, only this one has a bar at the back. Twenty Durango dignitaries, including yours truly, will get up and boogie to 10 different dance styles, risking limb and reputation for a good cause.

That good cause is the Durango Derailers, who raise funds to support Southwest Colorado children in need of care at Children’s Hospital Colorado (CHCO) in Aurora. These assistance funds provide lodging and transportation each year for around 500 local families who have to travel to and from CHCO for their children’s critical (and often chronic) care. Families who need to tap into the funds don’t need to disclose the details of their children’s needs – they simply contact the Derailers through their website, www.durangoderailers.com.

Tickets to Dancing with the Durango Stars, and all donations benefit the Derailers’ dedicated fund.

“It is a really great way to tell the community who we are and what we’re doing,” Derailers’ team captain Laura Shelton said.

The Durango Derailers are actually a cycling team, founded by pediatrician Kelly Miller in 2008 to ride in the annual Courage Classic, a bike tour that also benefits the CHCO. Each year since 2012, the Derailers have raised over $50,000 for the Classic – a threshold which enables them to earmark the funds specifically for patients and families from the Four Corners.

The cause is near and dear to Miller and her husband Doug (who are dancing together in this year’s Stars), because their now-13-year-old daughter received life-saving cardiac surgeries and intervention at CHCO. Shelton, who is also the vice president at Alpine Bank and took the helm as team captain last year, also has three children who received critical care from the hospital.

For years, the Derailers’ only fundraiser was the Courage Classic, which takes place around Copper Mountain west of Denver. Then for 2016, Dancing with the Durango Stars was in search of a new non-profit beneficiary. The Derailers embraced the opportunity, and the resulting partnership with the Stars is opening whole new avenues for the team. For starters, it’s giving the local community a chance to engage with the Derailers and get personally involved with their mission.

“We had never done a local fundraising event,” Shelton says, “but we wanted to teach people more about what we did in the community. The people who maybe don’t have a medical need, or they don’t know somebody with a story, didn’t really know there was something like this here. ”

And what better way to engage Durangoans than dressing up and getting on stage? On a practical level, that’s what Dancing with the Durango Stars is all about. After all, as producer and talent wrangler Leslie Carlson says, “Without the dancers, we got nuttin.’”

About those dancers. We’re not ringers brought in from the big city dance halls. We are locals shanghaied into braving the bright lights in order to support other locals. We are people just like you – in fact, even you could volunteer yourself for next year’s show. And you’d fit right in, because all of us are neophytes in one way or another.

“We have a whole range of dancers,” says Carlson, who wrangles the dancers in her Groove U studio, south of town next to Dietz Market, and choreographs most of their dances. “They run the gamut from people who have never danced and never met, to former professional ballet dancers. But no matter where they are in that spectrum, they’re all doing dances that are outside of their comfort zone.”

For instance, it’s tricky for a waltzer to switch to rumba. Or for a tangoista to tackle West Coast swing. Or –Carlson’s words, not mine – for ballet dancers to get their knees in the same room.

Once our joints and extremities converge in the Strater, though, you can bet on one hell of a show. We have all been practicing for two months, honing our skills (or discovering we have them in the first place). And we’re motivated by the fact that our dancing – whether playful, energetic, or just straight-up sexy – does more than connect children to life-saving care. It also helps stabilize those families who face extreme auxiliary medical expenses beyond the costs of care.

“It allows families to stay in this community,” Carlson says. “If they had to shoulder the burden of those travel costs on their own, they would have to move to the Front Range.”

“We’re supporting kids’ health and lives,” adds participant Sally Zabriskie, who incidentally is the most awesome dance partner in the world. “And we get to learn a dance. It’s enriching, both personally and in community.”

In other words, we are living, wheezing proof that anyone can learn to dance for two minutes at a time. And by helping our community, we develop ourselves, too.

“The most rewarding thing about working with the dancers is just seeing the personal growth they go through,” Carlson says. “Some, it’s learning a new dance. And some, just getting out there and performing in front of people takes a lot of guts. To see somebody go from very shy to being willing to do that is pretty cool.”

So get your tickets now! Once sold out, they are sure to be a black-market commodity. Then come on out to cheer on your fellow Durango-area residents and help crown this year’s dancing-slash-fundraising champions, the brightest stars of all.

And no matter what you think of our dances, be sure to remember the true meaning of Dancing with the Durango Stars: the children who benefit from the Derailers’ family assistance fund.

“It’s not all about skill and technique,” Shelton says. “It’s also about creating a support network that’s out there in the crowd on behalf of a really good cause.” 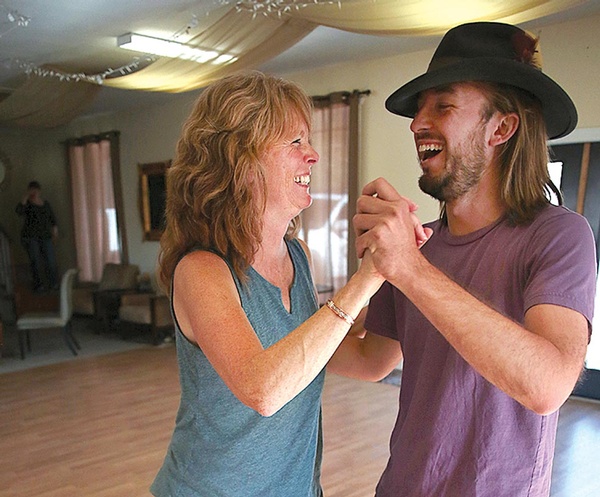 Zach and Sally put on thier serious dancing faces. Expect the show to be just like this, but with more sparkles./ Photo by Jennaye Derge

What: Dancing with the Durango Stars

Tickets: General admission $35; limited number of VIP tickets as well. Available at the Strater box office and at www.henrystratertheatre.tix.com

If you’d like to support your favorite Telegraph writer’s championship quest* while also supporting the Durango Derailers, you have three ways to do so:

• Bring cash and checks to the show to vote with your dollars; and

• Make an advance donation to the Derailers in that dancer’s name. Contact Laura Shelton at LauraShelton@alpinebank.com or 426-7170.

*Or, you know, you can pick any dancer you like. But trust us. Zach’s and Sally’s blues fusion number is HAWT.