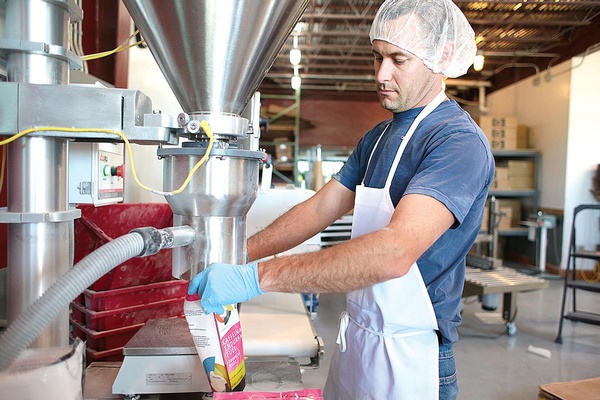 Brer Bales pours the latest batch of endurance fuel into bags to be shipped at Tailwind Nutrition's production facility in Bayfield on Tuesday afternoon. Each bag comes with a handwritten note from the Tailwind staff./Photo by Jennaye Derge

Local ultra-runner Ron “Braz” Braselton loves to race. His stomach does not. In his first few years of long-distance events, every race was a gamble, usually centering around an epic disaster story of Braz GI meltdown. He’d almost always fight through and finish, a destroyed mess of a man. The price was high; the torture always worth it, he’d say (later). But was it really necessary?

A determined sonuvagun with big goals, he tried “literally almost every combo of things,” suffering tummy turmoil from a smorgasbord of consumables that included the traditional gamut of gels, bars and shots to the more pedestrian peanut butter sandwiches, Pop-Tarts and even baby food.

Then came the 2016 Transvulcania, a 77-kilometer race in Spain deemed one of the toughest ultras in the world. This time, he opted to use only scoops of Tailwind Nutrition added to his water bottle. The decision paid off, and he had his best race to date. It was official: the nutrition mix from his hometown of Durango, Colorado, had changed his life forever.

Besides fueling ultra-runners, Tailwind is revered as the magic bean for athletes in other endurance disciplines, including triathletes, fire fighters, rock climbers and even Green Berets. But it’s not just for athletic pursuits. Like other electrolyte, hydration and calorie replenishers, Tailwind is also a brilliant fix to those Saturday morning hangovers.

Tailwind’s founders, Jeff and Jenny Vierling, are endurance athletes who met in the 1990s riding bikes in Seattle, bonding over the myriad messy scenarios adventurous lifestyles tend to present. When they quit their jobs at Microsoft in 1996 and loaded up the Subaru to camp and travel for a while, they hadn’t planned on the road ending in Southwest Colorado.

In 1997, Durango-based friends from Jeff’s Stanford days had warned them that a casual Durango visit could easily turn into a final destination unpacking event. Predictably, the Vierlings – who were looking for a place to ride bikes and raise a family – were easy bait for Durango’s irresistible lure. But their idea to launch an endurance sports drink empire came as a total surprise.

Tailwind’s inauspicious story started when Jeff found himself with his head in a trashcan, upchucking muesli at the finish line of the Leadville 100. It was the last straw for the ultra-athlete who, like Braz, had tried everything. Nothing kept his stomach strong for the feats he so badly wanted to pursue. Fueling issues had hijacked “the blood, sweat and tears of my training,” he says.

So he did as any problem-solver would: he started researching the science behind sports nutrition and the inner-workings of the complex, fickle digestive tract. The goal was to craft an endurance product that would be easy to use, taste good enough to want to drink, maintain energy levels and, ultimately propel him to the finish line in fine, vomit-free form.

He didn’t have a background in biochemistry. Rather, he’d studied values, technology, science and society (aka VTSS in the academic world). The field explores connections between everyday life and inventions, like, for instance, how the Eggo waffle impacted breakfast time for the typical American family. (His conclusion, in case you’re wondering: the Eggo dethroned the idea that families had to sit and eat breakfast together; with Eggos, you could eat breakfast on your own, on the go!)

Driven by curiosity, Jeff learned that our bodies can only process 200 to 300 calories an hour. Anything more and the inevitable gut-bomb kicks in. He also found that protein doesn’t improve endurance during exercise. Hasta la vista, peanut butter sandwich.

So the wizard got to work, tossing stuff into his cauldron of a KitchenAid mixer. Before long, Tailwind Nutrition was born, touted to be “like having the wind at your back, not like a kick in the gut at mile 45.”

The end result was a clean, simple recipe featuring all-natural, organic, gluten/wheat/soy/dairy-free ingredients that could be mixed with water, providing steady, small doses of fuel that pass right through the stomach. The mix matches what the gut is designed to absorb, so once in the blood-stream, the glucose fuels muscles directly, without taxing the digestive tract, states the website.

At first, Jeff separated the white powder into Ziploc bags and passed them out to biking buddies at trailhead parking lots. Despite its suspicious appearance, they loved it, suggesting he offer the product on the Leadville 100 forum. He got 50 participants to test it, and they also loved it, many sending their tales of excitement that they were able to achieve goals, thanks to this miracle product.

So Jeff and Jenny launched a website for easier ordering, crunching numbers to come up with competitive, sensible pricing: for a 10-hour race, the body needs roughly 2,500 calories. For the same amount of calories from other energy products, racers would spend around $29. Tailwind costs $17.50 per 2,500 calories.

Just before the Iron Horse Bicycle Classic in 2012, Tailwind made its legitimate debut at Mountain Bike Specialists. The product flew off the shelves, sending the husband and wife back to their kitchen for late-night sessions whipping up more batches. After its success at the IHBC, Tailwind hit the road with the Vierlings, sold right out of the back of their truck at races across the Southwest.

It was official: demand had spiked beyond their mom-and-pop approach, and the two decided to open a manufacturing facility in Bayfield. They got a logo, legitimate packaging and a team of employees, who to this day take turns fulfilling and shipping the bags replete with the customer’s name and a handwritten note of thanks. It now also comes in seven flavors, from “Naked” (if that can be considered a flavor) to

Green Tea Buzz and good, old-fashioned Lemon. “Personalization is in our DNA,” says Jenny, who also doesn’t have a sports nutrition background (she studied French and economics). “We feel vested in every single customer who buys Tailwind.”

Several years after Jeff’s horrific trashcan experience, Tailwind has evolved into a revolutionary institution for endurance athletes around the world, even helping some to break records. Ultra-cyclist Amanda Coker, for instance, just shattered both the women’s and men’s records for Highest Annual Cycling Mileage. As of May 16, 2017, the former Fort Lewis College cycling team member had biked 86,500 miles in 365 days averaging 237 miles a day. Twenty-four-year-old Coker plans to go after the 100,000 mile world record next, set by Tommy Goldwin 77 years ago. She says she’s been able to accomplish the feat so far on eight 20-ounce bottles of Tailwind a day.

“With Tailwind, I can go all day and get the calories I need to sustain my ride and I don’t get tired of the flavor or queasy,” states Coker in a press release.

“If it works for extreme athletes, just think what it will do for you,” says Jenny. She compares it to the ancient Samsonite suitcase commercials of a gorilla pounding the indestructible carrier, or to Timex watches’ old advertising pitch, “takes a licking and keeps on ticking.”

With the 50-mile Iron Horse Bicycle Classic returning this weekend, many a rider will feel like the stressed Samsonite or Timex tied to an outboard motor and submerged in water. That is why local biker and businessman John Baxter had the idea to team Tailwind with the IHBC and create the Tailwind Beat the Train Challenge, for which registration filled up in two days. The 150 riders who signed up will pedal to outperform the 31⁄2 hour locomotive time, supported by Tailwind Nutrition and pacers. Those who arrive before the train will be honored with a plaque that will hang in the D&SNGR Museum.

“When I first rode the Iron Horse in 1999, it was all about beating the train,” recalls Jenny. “That’s kind of been lost through the years, so this will help bring it back to its roots.”

The challenge fits perfectly with Tailwind’s own roots and passion: to help people accomplish their goals. The couple always looks forward to Sundays and Mondays, when the inevitable flood of emails comes in with personal stories of triumph and gratitude for Tailwind’s role in those successes.

Of course, as in any business, there are those who don’t have stellar, life-changing experiences with Tailwind. To these customers, Jenny and the Tailwind team encourage them to reach out. Together, they’ll break apart the race, product usage and other variables that contributed to failed performance. (For example, little known fact that if a racer eats watermelon with Tailwind, stomach issues arise because watermelon is high in fructose, and the excess goes straight to the large intestine, says Jenny.) Most of the time though, bad experiences can be traced back to dehydration.

For Braz, the key is to keep it simple and use Tailwind and only Tailwind; if he mixes it with anything, he’ll get sick, he says. “(It’s) all you need, all day. Really.” 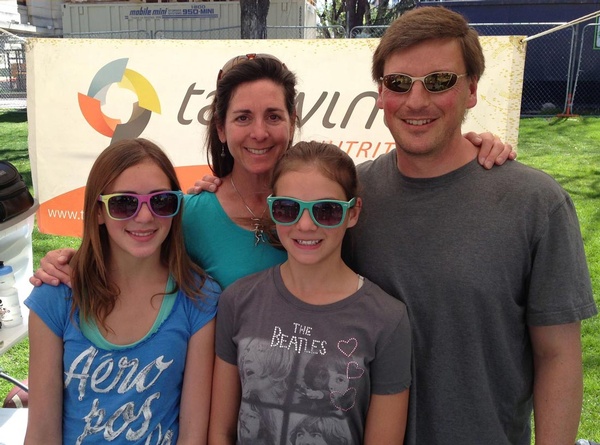 Jenny and Jeff Vierling with thier daughters, Sarah and Emily, at the Whiskey Off-Road in Prescott, Ariz.