Localphiles: Last call for alcohol
On the outskirts of town, Erika Pray is often your first or last stop 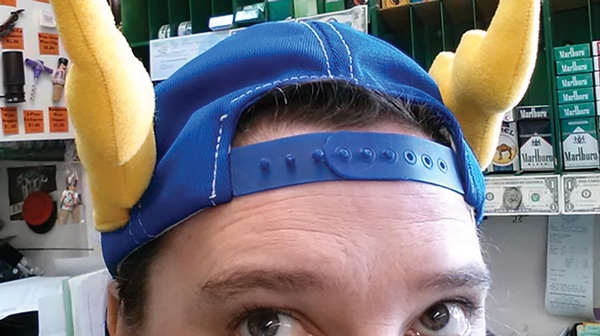 For travelers along Highway 160 on the west side of Durango, Wildcat Canyon Liquors is either the first store to welcome them into town, or the last one to see them go. Partially nestled into the trees on the banks of Lightner Creek, the store looks more like a house than a place of business. While speeding home or rushing to work, a small letter board and a flashing “OPEN” sign under the green trim can be easily missed. Yet all it takes is one stop at the little white house for a six-pack, a bottle of wine or your favorite spirits to make it stick in your memory.

After frequenting this store a dozen timesover the years, a few weeks ago I finally introduced myself to its proprietor, Erika Pray. I wanted to know the name of the cat who purrs around my ankles as I stare into the beer coolers; to know more about the woman perched high on a stool behind the counter, never taking my money without first discussing the weather or commenting on the TV show playing beside her. When I asked to write an article about her, she agreed with a chuckle, but muttered about an uninteresting life.

Arriving at Erika’s store for our interview, I was greeted by “Sh**** kitty,” more formally known as “Guinness.” Erika offered me a jar of coffee and suggested we sit outside on her Coors double lawn chair. We took our seats by the front door, facing the highway and a canyon wall dotted with yellow and orange trees. The drone of cars passing by became background music to our ensuing conversation, and as we soaked up the blazing fall sun, I began to feel as though I was catching up with an old friend.

Erika grew up in the suburbs of Cincinnati. She has one sister, currently a Coloratura Soprano in San Francisco ... “the only person I know who can sing ‘Amazing Grace’ with tears streaming down her face and never waver a note.” Their mother was born in Hungary, where their grandfather was an engineer. Not wanting to help the Russians, he fled the Soviet occupation with his family and immigrated to the United States in 1956.

I asked Erika to tell me about her parents: “They just went skydiving!” At 75 years old, they passed a skydiving spot and spontaneously decided to go for it. Erika’s mom said her mouth was really dry from smiling.

Erika’s voice lightened when talking about her parents. They never missed one of her home softball games, or at least they were there by the third inning. Reminiscing about her childhood, Erika vividly recalls her mother picking up trash while walking into the grocery store. As a child, Erika hated it, but now she does it all the time. She spoke of the support her parents gave her, and the trust they showed in letting her do things like collect pop bottles at construction sites in exchange for dimes.

Toward the end of high school, Erika knew she wanted to move West. She considers herself a country mouse who grew up in the city. She was a three-sport jock in high school, playing basketball, volleyball and softball, with dreams of becoming a teacher. After touring colleges in New Mexico and Arizona with her father, Erika thought she would attend UNM. But when the opportunity arose to tour one last college, her fate was sealed; she told her dad as they drove into Durango, “I think you just drove me home.” Erika played softball for Fort Lewis College and majored in humanities.

After leaving Fort Lewis, with a change-of-heart about teaching, Erika decided to make a life for herself in Durango. She started working at Wildcat Canyon Liquors on her dad’s birthday in 1998, buying the business a year later when the owners divorced. Last week was the 20th anniversary of her store, a fact that seemed to have just dawned on her during our conversation. She still doesn’t know exactly why she bought it other than she thought she could do it better.

I told her the store seemed to be doing well, to which she responded, “It’s like a bad rash. It just won’t go away.” While we laughed hysterically, I sensed this statement wasn’t completely untrue. She calls herself a drug dealer, and she has dealt with her fair share of misusers and uncouth events. Over the years, Erika has felt her responsibility to the community deepen. She has made enemies by not selling to people who are drunk, sometimes asking them to put their keys on the counter. Her worst nightmare is something bad happening and feeling like she could have stopped it: “It’s never the drunk asshole who dies in the wreck.” It doesn’t do her any good to have people drinking themselves to death.

But while owning a liquor store comes with its demons, Erika loves it. She doesn’t like feeling buzzed, but enjoys a good beer, wine with dinner, or a bourbon on the rocks by the fire. What does she like most about her business? “The people. If you’re playing the game right, it’s not something you need to do, it’s something you enjoy. I like watching people who have been drinking the same thing over and over, all of sudden switch.”

She likes her community and she likes doing right by her customers. When regulars showed up during our interview, she knew them by name.

As midday came and went, I thought our interview might be wrapping up. I asked Erika if there was anything else she wanted to tell me. “F*** plastic,” she said. Growing up in the ’70s, she says plastic made then was made to last forever. Now, it disintegrates when left out in the sunlight, leaving it unusable and un-recyclable. Like her mother before her, Erika picks up trash wherever she goes and recycles whenever she can. Her father used to cut the plastic windows out of envelopes to recycle the paper. Yet she credits her friends and the Durango community with supporting her desire to cut back on plastic waste. She doesn’t sell anything that can’t be recycled, and she has recycle bins for every material, including compost, in front of her store. In 2013, she stopped buying plastic and proudly drinks her coffee out of a mayonnaise (or maybe spaghetti sauce) jar.

I thanked Erika for her time, packed up my notepad and recorder, and she gave me some homemade soap to take home. I had just spent a few hours with a Durango icon, but really it was an overdue chat with a friend. A friend who listens, a friend who hugs and a friend who believes in her community. Erika says that if we can each make something better every day, it’s better for everyone.

I am encouraged by Erika and our friendship. As I pulled out of the parking lot of Wildcat Canyon Liquors, I watch her pick up trash littering the highway.