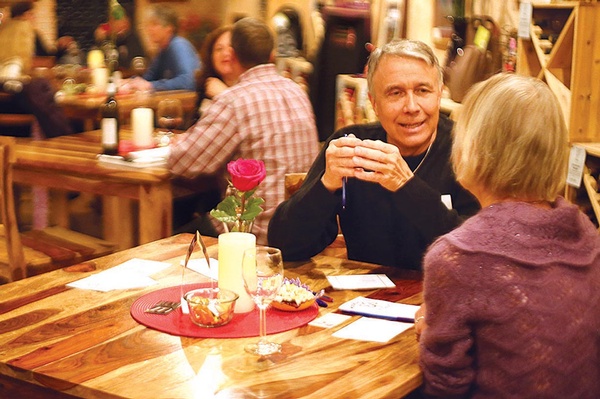 The only thing I can truly remember saying to my boyfriend the night we broke up a few months ago was “Ugh, this sucks. I really hate dating!”

I don’t really remember the “I’m sorry” or the “it’s not you, it’s me.” I just remember worrying about the prospect of putting myself back out there.

What’s scary about dating isn’t the social part – on a good day I’m a closet extrovert – but rather, the first awkward moment of meeting someone. I find it hard to believe I can just walk, nay strut, out into the world and accidentally bump into a man who will fulfill my hopes and dreams. This is mostly due to the fact that every day life is highly
unromantic. Most of my days are spent hurriedly trying to get somewhere, with an unintentional permaresting bitch face and the same basic unflattering jeans and shirt. I’m usually on my way to wait in some sort of line: a coffee shop, a stop light, or the checkout at the grocery store. Is a man supposed to see me scowling as we wait side by side at a traffic light and think “wow, she’s cute!” only for me to holla’ back with my phone number? Or perhaps I’ll encounter my next gentleman caller at the grocery store, bananas in hand, asking me with a charming smile what ingredients I like on my ice cream sundae so he can make me one later that night.

“I’d like to call bullshit on that,” Emyrald Sinclaire, love coach extraordinaire, told the crowd at her second annual speed dating event at the Four Leaves Winery on Tuesday night (aka Valentine’s Day.) I’m pretty sure she was looking right at me when she said it.

According to Sinclaire, former Earth Girlturned-professional-love-guru, such excuses inhibit us from finding love. Her message is that even though we all say we’re doomed to singledom and cat castles forever, we are misguided and Sinclaire is here to prove pessimists like me wrong.

For almost a year, this love coach has been giving advice, hosting webinars, counseling couples and helping the romantically uninclined. One of her most recent endeavors is speed dating.

Unlike Tinder or Bumble, speed dating dates back to the good old days before hashtags, when people actually spoke face to face – which, for my digital generation, is a bit of a foreign concept. In fact, by today’s standards of instantaneously swiping left or swiping right, speed-dating can seem painfully slow and archaic.

Thankfully, she buffers her events with beer, wine and plenty of suggestions for ice breakers. The night started off with a pep talk from Sinclaire to our perfectly ratioed group of six men and six women. In a nod to chivalry, the men rotated around to the women to exchange pleasantries and try to find a spark in six minutes. And even if there are not fireworks, Sinclaire said that’s not so bad – at the very least, you’re socializing and meeting new people. This is why one participant, Tim, said he enjoys speed dating. “It gets me to break out of my shell and out socializing,” he said. Tim has been to a few speed-dating events and emphasizes the fun in it. “It’s great to not have expectations. It’s only six minutes, so it’s nothing to get bent up about.”

Even though he mentioned the ultimate goal is to find a one and only, his spirits were light. When it was his turn to talk to me, he was armored with a list of get-to-know-you questions. He said he tries to tailor the question to his audience.

His question for me? “Who is your favorite cartoon character?” (Calvin of Calvin and Hobbs, of course.) Throughout the night, Sinclaire reiterated the creativity point with suggestions of unique conversation jumpstarters: “Which three words describe you best;” “If you had your own talk show, who would your first three guests be;” and “If you could be invisible for a day, what would you do?” But Sinclaire, who has a background in natural health and her own experiences with love coaches, is overflowing with more than cute intros. She reminds everyone that the quest for love involves three steps: knowing who you are, being happy with yourself and – this is the important part – manifesting it. It’s this last part that requires work. One way is to make a list of the characteristics of your perfect mate, and then, as Sinclaire puts it, “be prepared for magic” because “it’s really powerful putting pen to paper.” As a love coach, she has plenty of tricks – or as she puts it “love bombs” – up her sleeve. She has numerous success stories to prove it, including one of a twentysomething woman who had a hard time finding a lad to commit. After only one session with Sinclaire, this lovesick lady found her “prince charming.” This example isn’t rare for Sinclaire. She said a lot of stories end this way after only a few phone calls or video chats.

“I generally like to (coach) over video so my clients can go back and watch the recording whenever they want,” Sinclaire said. She is willing to talk to anyone from anywhere; singles or couples. But her specialty is helping women find the love they wish to create.

“I wanted to do a speed dating event in Durango because I’m very social, and I wanted to get our local community out there and involved,” she said.

Many of the evening’s participants agreed that it can be difficult to break out of their social bubble, and said if nothing else, the evening was a nice way to get out, have good conversation and make a new friend or two. For Sinclaire’s next speed-dating move, she envisions a larger crowd, hopefully in a wider breadth of ages to play games, mingle and have a more “interactive” experience.

As for my first foray into speed-dating, I am sorry to report there were no fireworks and alas, no Prince Charming. But, then again, I was happy to sit on my corner of the bar and not have to hurriedly make my way through a crowd, stand in a line, or even have to sit and swipe right or left. The “speed” in speed dating did not take a literal hold of my already sometimes anxious heart, and instead of feeling rushed, my angry face dissipated with a couple glasses of wine, some nibbles of delicious deserts, and some real conversations with real people. 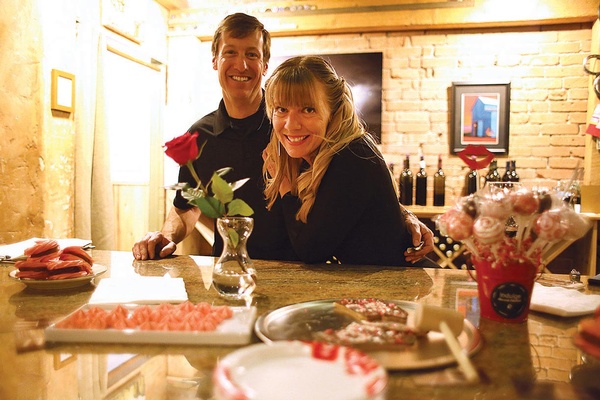 Sinclaire and partner, Ron Little (who incidentally did not meet speed-dating)