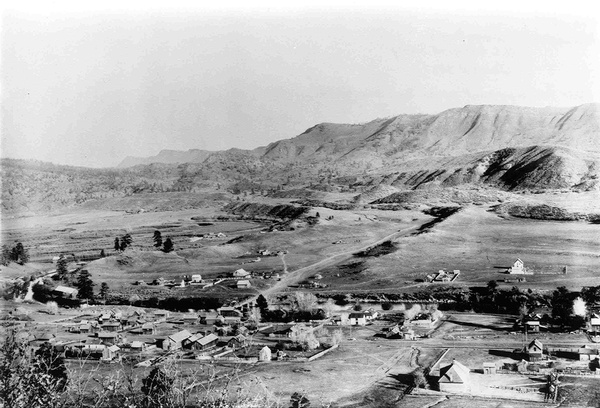 Animas City back in the day. Originally founded in 1860 by Capt. Charles H. Baker, of Baker's Bridge fame, it was abandoned shortly thereafter. About a decade later, settlers moved back in. This time for good./Photo courtesy Animas Museum

After you’ve lived in Durango for a while, you start to think you know the town a little too well. You know every twist and turn on your favorite trail, your dog’s favorite spot to pee, and every crack in the sidewalk on your way to work. And when you live and work downtown and force your friends to socialize with you downtown, maybe you don’t always pay attention to the northern outskirts as much as you should.

That is, until you get out of your safety bubble and venture north on the main drag only to discover a cool new bike shop or ice cream store you’ve never seen before. And that’s when you realize, there’s life north of 15th Street, things you’ve never seen before. North Main’s got it going on – almost like its own little town. Which is kind of funny since, unbeknownst to many of us smug south towners, it was here first.

Durango resident Erin Murphy knows all about the OG North Durango, which was actually called Animas City. For years, she’s been interested in closing the gap between north and south, but also in getting to know the area in a more intimate way. With the help of Denver-based leadership program, Colorado Creative Industries’ Change Leader Institute, and the La Plata County Historical Society, she’s dug up the history of the area. What she found is a doozy of a story, one she’ll share and celebrate with all comers next Wednesday at “Old Animas City Night.” A fund-raiser for the Animas Museum, the event is the latest installment of the Animas Farmers Market and Night Bazaar, which takes place at the corner of 30th Street and N. Main from 5 - 7 p.m.

“If we care about a place, then we are so much more likely to pitch in, take care of it and take care of each other,” Murphy reasoned. “That's what community is all about and it's powerful medicine.”

According to Murphy and other local history buffs, the story of Animas City has gone greatly untold. And perhaps rightly so, as it turns out there is little information on it. Twenty years Durango’s senior, Animas City, which takes its name from the nearby river, first put down stakes in the winter of 1860-61 about a mile and a half north of Durango. It was founded by Capt. Charles. H. Baker who, upon finding gold in the San Juans, trekked south to the Animas Valley in search of more riches. Baker and a group of his best money-hungry friends dug and dug, and while they found nothing, they created something. They called it a city, and then called it a day.

Soon after the city was abandoned, the Civil War reared its ugly head and Baker (a Confederate, if you must know) and his buddies left the area with no gold but an awesome bridge bearing the Captain’s name. He survived the war and returned to the area, only to be killed by Indians.

Animas City though, was not dead. About a decade after Baker and his buds flew the coop, a new group of prospectors settled in. Animas City’s epicenter was pinpointed at the present day junction of Main Avenue and 32nd Street, and once the fresh population came flooding in, the town began to spread, spilling south and west to Junction Creek and tapering to the north.

These new folks were curious about gold, too, but were more willing to adapt to farming, cattle, big city dreaming and some socializing. Once the first saloon

opened in the newly formed civilization, the first jail naturally followed as well as the need for law and order. On Oct. 5, 1878, Animas City was officially incorporated – a full three years ahead of its now more-cosmopolitan sibling to the south. Its first order of business: laws and taxes.

A man named E.H. Cooper was elected Animas City’s first mayor, and he wasted no time making a few rules and collecting cash. A personal favorite is Ordinance No. 8, which stated that every able-bodied man between 21 and 50 years of age must take to the streets and alleys with mops and buckets to “labor.” If they did not, they had to pay up, and the money went to maintain infrastructure and said streets and alleys.

Other equally boggling but nonetheless entertaining ordinances were as follows:

• “Any hogs, shoats (*which, we are guessing, is a cross between a sheep and a goat), pigs, jacks, goats or stallions running at large in the city limits were to be impounded and the owners were to be fined.

• Fire wardens were elected by the Trustees. Every person at a fire had to obey the wardens or be fined.

• Any person allowing private drains, pools or privy to become foul or offensive was subject to fine.

• It was a misdemeanor to swim or bathe in the river between the hours of 6 a.m. - 8 p.m. within city limits. • If any person appeared in public in the nude, lewd dress or in the clothes not belonging to his or her sex, he or she was subject to a fine of not less than $10 or more than $50.

• Any person carrying or firing guns or cannons in the city limits was subject to a fine of $500 or 90 days. • Anyone riding or driving a horse faster than the ordinary walking gait over the Animas bridge was subject

• All persons arrested for carrying or shooting firearms in the city limits were fined $5.

As the “fun police” came to town and put the kibosh on the good times, a few other things were about to change in a big way as well. The most important? Our beloved train chugged onto the scene. In late 1880, representatives of the Denver & Rio Grande Railroad strode into town with slightly less than a chip on their shoulders and negotiated with residents and officials of Animas City to run the railroad through the town. (Allegedly, the railway was meant to run all the way down to Durango, Mexico, hence Durango, Colo.’s, name). What these big shots from Denver really wanted though, was the land. The railroad wanted to snatch up unoccupied plots and turn around and sell them, which of course they did. Thus, as the train made its home, it also made Durango. Jobs were available through the train, land was available to buy, and people started building houses, businesses and infrastructure. Thus, more and more opportunities for work arose. Soon the area became the bustling micropolis of Durango we know and love today.

Contrary to popular belief, there was little to no bad blood between Animas City and the railroad. Though there were a few disagreements, the train and the city came to mutual understandings and it was even documented that Animas City had a small station so that the train could stop and pick up or drop off residents. The relationship was generally friendly, and the railroad did not build in spite, but rather in hopes of obtaining and selling land for a new community.

Supporters of “underdogs” won’t like what happened next. But just remember how much we all love what is now an all encompassing Durango.

For almost 67 years, Animas City and Durango co-existed as two separate entities, but eventually, Durango swarmed in and squished the struggling Animas City. After debt and failing infrastructures, residents of Animas City conceded and threw in the towel. In 1947, both towns overwhelmingly voted to unite the two municipalities.

So, thanks to the train, we do not have to be divided. Those of us who live north of Junction Creek don’t have to call ourselves Animas City-ans. And even though we still need to ride our horses at a reasonable speed and keep our clothes on, we’re lucky to all be a part of Durango’s city limits.

It’s little-known stories like these that Murphy wants to keep alive. That’s why she and a few of her neighbors teamed up with the Animas Museum to organize the Old Animas City Night, which will be a fund-raiser for the museum.

The museum, which was built in 1904 as Animas City’s school house, opened its doors to Durango in 1978 as a museum. The building still has a classroom intact and rotating exhibits telling stories of Durango and its surrounding areas.

“I see the museum as an underutilized cultural asset right in our community that could be a catalyst to connect us to each other through story,” Murphy said. “I think stories deepen our relationship with a place and we can use them to build community.”

The night is meant to bring together community, connecting us to each other and our roots. The event will include free food from Sunnyside Farms, s'mores, wine and beer for purchase, live music, story telling, an old-time photo booth and a walking tour of Old Animas City. And if you’ve never been inside the museum before, it will open its doors for the night for a free tour.

Which means all you downtowners will have to leave your comfort zone, venture into the great unknown and say hello to your neighbors up north. Think of it as an adventure, and maybe, unlike Capt. Baker, you’ll actually strike gold. Or at least strike up a conversation or two.

Most of the research for this story was taken from the oldest and jankiest book at the Durango Public Library, The Animas City Story, a Forerunner of Durango, Colorado by Retha Beebe Luzar and published in 1978. The book was so decrepit, in fact, they wouldn’t let me take it outside of the library. So I had to sit in the library on a beautiful Saturday afternoon with all the other clear-skinned book hermits. The rest of the information was gleaned from an enthusiastic Animas Museum volunteer named Carolyn 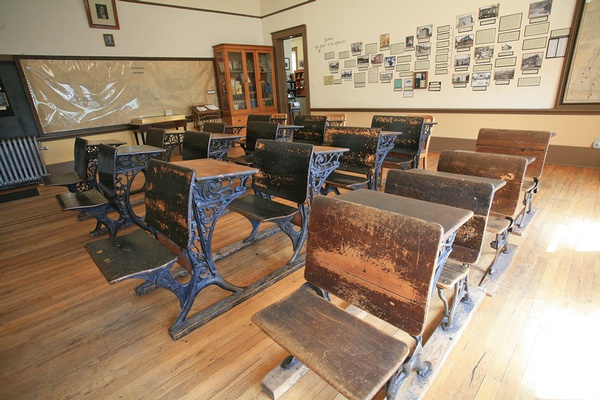 Desks sit empty in the old Animas City schoolhouse-turned-museum. A fund-raiser will be held Wednesday to benefit the museum and keep the history of Durango's older sister town alive./Photo by Stephen Eginoire