Merely undaunted
Despite change in venue, summer Shakespeare show will go on 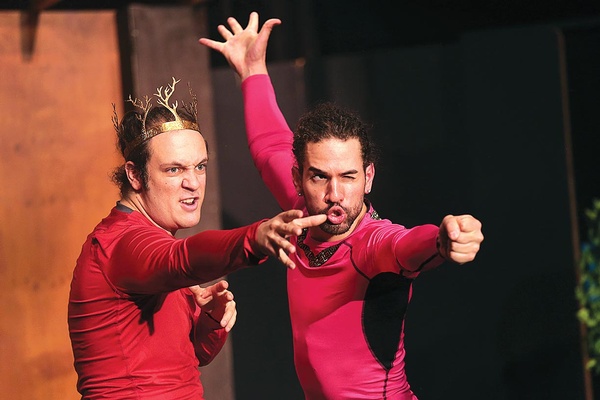 Lord, what fools these mortals be!” proclaims Puck, aka Robin Goodfellow, in Shakespeare’s “A Midsummer Night’s Dream.”

More than 400 years after the Bard wrote those words mocking the foibles of humankind, they ring truer than ever. They also highlight why William Shakespeare remains one of the most important playwrights in history. His metaphors and storylines conjure not only modern political intrigue, complex alliances and love triangles, but fantasy and humor.

Starting this Friday, Merely Players will pay homage to the master with perhaps one of his most beloved comedies, “A Midsummer Night’s Dream.” And, in keeping with another time-honored theatrical ritual, despite a last-minute change-up, the show will go on.

Originally slated to take place under the stars at James Ranch, Merely Players was forced to make a hasty change of venue as a result of the 416 Fire. Fortunately, Fort Lewis College stepped up, and the play will now be held at school’s Mainstage Theatre.

“We have to keep trucking along, and I’m happy to replace the morbid fascination of the fire with a couple of hours of unbridled escapism,” actor Austin Hohnke, said. “I think we have a lot to offer this community and despite the circumstances, I’m grateful to be here when the community needs heart and encouragement. This crew is certainly bringing the love.”

Although the show will not be performed “under the stars” as originally scheduled, the production is star-studded with an outstanding ensemble cast. All, with the exception of actress Erika Vetter, are Merely Players’ alumni.

Rather than conduct auditions, Director Mona Wood Paterson put out a call to the comprehensive list of talented thespians she has worked with in the past. “Once they committed, I cast the show simply because I know them so well and I know which parts they’d be wonderful at,” she said.

Most of the cast are now professionals and have experience with Shakespearean plays. Elizabeth Gray, for example, has studied at The Royal Academy of Dramatic Arts in London as well as Tisch School of the Arts in New York. Others have appeared locally in numerous Merely Players’ productions including “Much Ado About Nothing,” “As You Like It” and “The Tempest.”

In the scheme of things, “A Midsummer Night’s Dream” is one of the Bard’s early plays (c.1595), yet still performed internationally on a regular basis. And with good reason. As a comedy, it riffs on marriage, mischievous fairies, love potions and magic. It also contains a heavy dose of hi-jinks, mayhem and charm. Subsequently, it is a challenging, high-energy undertaking for actors and crew.

This plot surrounds the marriage of Theseus, the Duke of Athens, to Hippolyta, the former queen of the Amazon. When mischievous fairies intervene, love goes astray. As with other Shakespearean fare, this one also has a play within a play, with multiple stories. The trials and tribulations include two sets of lovers camping in a mystical forest and a ragtag group that attempts to put on a play for the wedding of the Duke.

As often as not, Merely Players casts its actors in several roles for the same play, and the eight actors in this production take on a total of 23 parts. Accomplished actor Gray portrays three: Titania, Hippolyta and Snug.

“The most challenging aspect of my roles is the immediacy in changing from one persona to the next, clearly and decisively,” she admitted. “There is one scene where I am all three of my characters! Creating different personalities, body language and voices for each has been a fun stretch.”

Vetter, the only cast member who has not worked with Merely Players, remarked that her role allowed her to try her hand at some more intense physical comedy and clowning, which has certainly challenged her stamina. “But I think the greatest challenge has been trying to keep a straight face while onstage with these debaucherous (sic) goof-balls," she said.

Amanda Arcamano (Helena, Peaseblossom and an attendant) was last seen in Durango in 2014’s “The Wizard of Oz.” She acknowledged that finding comedy in her role as Helena, who is primarily grounded in heartbreak and unrequited love, was “a bit of a switch” for her.

“In all of (Shakespeare’s) plays, he manages to cut right to the very center of the human experience,” she said. “I feel that he writes the way people dream, no matter what Shakespeare’s characters are feeling, they describe the emotion or event exactly how it is. And as for this production specifically, it’s one of the most fun and laughter-filled plays I’ve ever worked on!”

Adam Fontana (Lysander, Tom Snout and Cobweb) concurs with his cast-mates on the challenges and joys of the play. “To be back in our hometown, performing a beloved show with some of the most beloved people in our lives, all with one of our greatest mentors and collaborators; it’s truly a midsummer dream.”

What: “A Midsummer Night’s Dream”

*After the show on Sat., June 23, there will be a “Meet the Actors Soiree.” The $20 ticket price includes dessert, a glass of wine or other beverage, and a chance to visit with the actors