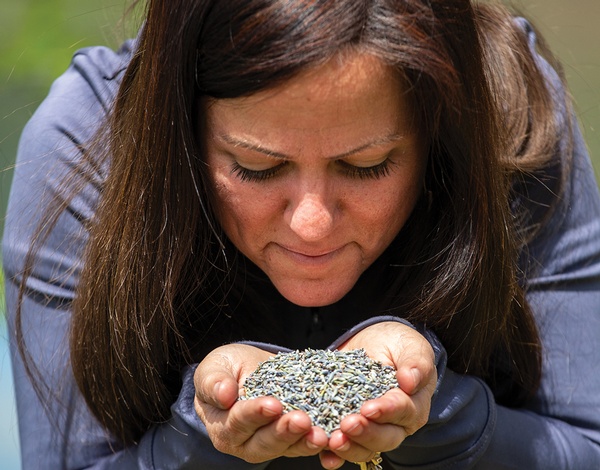 Jenny Diehl examines lavendar to be used in her skincare products.

We all know we are what we eat. But what about the stuff we slather, lather, smooth and splatter on our skin? Should we trust ingredient lists a mile long that contain unpronounceable words like “sodium lauryl sulfate,” “methylparaben,” “butylated hydroxyanisole” and “phenylenediamine?”

The answer for local holistic medicine practitioner and nutritionist Jenny Diehl – and countless others like her – is an unequivocal “no.”

“We have 22 feet of skin wrapped around us,” she said. “Our skin is our largest organ. Everything we put on our skin goes directly into our bloodstream.”

Yep. Those above-mentioned tongue-twisting chemicals – which can contain everything from coal tar and petroleum byproducts – can be found in a bevy of off-the-shelf skin products. But they’re also increasingly being linked to a bevy of maladies, from messing with our hormones and allergies to immune and reproductive impairment to the Big C.

And lest you think the Federal Food and Drug Administration is any help, think again.

“The cosmetics industry is a $62 billion industry, and it’s not regulated by the FDA,” Diehl said. “There are more than 80,000 chemicals in our supply system. We’re the guinea pigs it’s tested on.”

But, Diehl – a mother of two – decided a few years ago she was done being the guinea pig. “I threw out everything in my house,” she said. However, when she started looking for items free of suspect chemicals, she had a hard time. “I couldn’t find products that fit my standards,” she said. “So I just started making my own stuff, from cleaners to soaps and lotions. I realized, I could make everything!”

She began giving items she made to friends and family, and before long, she had a good little side gig going. “I found I had this passion I didn’t even know I had,” she said. “I loved that I could educate people.”

Little did Diehl know that her side gig would soon blossom into a full-fledged business. Last November, Diehl officially launched Cura.Te (meaning “cure yourself” in Latin), a line of organic, all-natural products for the home, bath and body. Everything the company makes, from tooth powder and deodorant to laundry detergent, is made locally at the River Bend Ranch, which she and her husband bought in 2017. Although not available in local stores (yet), she has an online store (curateforlife.com) and makes local deliveries.

In addition to being USDA certified organic, everything comes in recycled packaging or glass containers. (All except the deodorant and lip lube, which come in plastic because she has not been able to find a suitable substitute.) She will also gladly refill containers for people who stop by her shop.

Although the company is relatively new, Diehl’s journey began nearly 17 years ago. In 2002, Diehl’s mother, at the age of 55, was diagnosed with early-onset alzheimers. “The next five years became a living nightmare for my family and I as we watched her slowly deteriorate into a vegetative state and die at the age of 59 at 66 pounds,” Diehl recalled.

After her mom’s death, Diehl, who is from Texas, began to delve into possible explanations for her mother’s disease. “Losing my mother was very hard. It made me question why did that happen? How did that happen? And what can I do to prevent it from happening to me and my siblings?” she recalled.

Around the same time, Diehl had started a family of her own, and with two young children, the need for answers intensified. “I began wondering, why is there more disease happening in our culture?” she said.

Eventually, her quest led her back to school, where she became board certified in holistic medicine. “I learned about the correlation between toxins, chemicals and disease,” she said. “It led us to totally change our lifestyle.”

For example, she learned that aluminum, long implicated in breast cancer and alzheimer’s, is in virtually everything, from antiperspirant to canned foods and even baby formula. In addition, of the more than 1,500 substances that are banned from food and body products in the European Union, only 11 are banned in the United States.

“I learned about all these connections and looked back at my mom’s life, and there were so many tell-tale signs,” she said. “A lot of these manmade chemicals our bodies are not meant to break down.”

From there, Diehl began coaching people who wanted to heal naturally from disease, including diabetes, cancer and autoimmune disorders. For the next few years, she jumped around between California, Texas and Colorado caring for an ailing grandfather. After his passing, she and her family settled in Durango, a place they had often visited and grown to love. It was here – after a harrowing summer in the shadow of the 416 Fire – that she eventually became settled enough to finally launch her business. She now has a line of 65 products that she ships all over the world.

But her biggest realization through it all is that people need to take control of their health, do their research and ask questions about what they are putting into – and on – their bodies. She said this is where the name “Cura.te” came from.

“Really, if we don’t care for ourselves, we won’t be able to take care of the people we love,” she said.

And most of all, it shows Diehl that her’s, and her mother’s, suffering weren’t all for naught.

“It’s turned into something beautiful.” 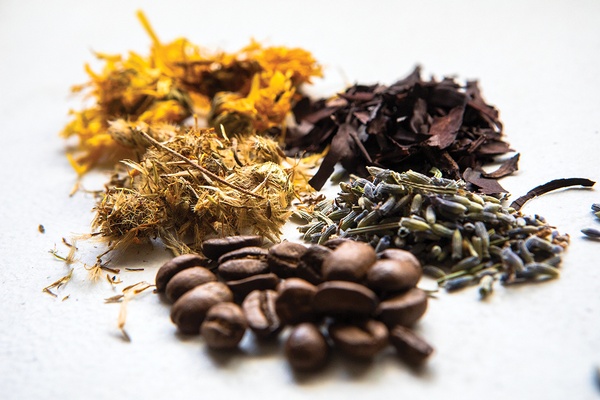 All of the products are organically sourced and made locally./ Photo by Stephen Eginoire