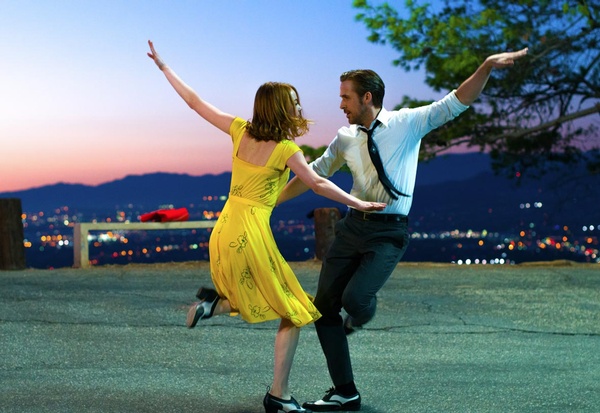 La La Land” seems to barely exist. It is so light and breezy, so stocked with nostalgia and whimsy, dream sequences and references to other movies, it feels like it might be that one movie everyone thinks they saw that never actually existed. Was that even real, or did I dream it?

If it was real, it starred Emma Stone and Ryan Gosling as two young hopefuls in the city of lights, waiting for their big break. Stone wants to be an actress and manages to find work on the Warner Brothers lot, but only as a barista. Gosling is a jazz musician who keeps getting fired from fancy restaurants because he can’t help but stray from the standards. He has strong opinions about jazz and dreams of opening his own club, but no money and no prospects. When they meet, both are about one bounced check away from heading back to the cornfields and snow of Middle America.

And yet they are very different people, which becomes apparent once they meet cute, irritate each other and then eventually come together despite those differences. He draws out the artist in her; instead of just attending audition after audition, she goes out on a creative limb, writing and starring in her own one-woman play. And he takes her direction as well, taking a gig with a successful jazz-techno band (led by John Legend,) even though he doesn’t care much for the music they’re making together.

Stone and Gosling are both gifted actors. Stone is without a doubt one of the most comically gifted actresses working today, and Gosling can do almost anything – he showed off his comedic chops earlier this year in “The Nice Guys.” Oddly, neither of them seem quite comfortable here, and I’m more prone to say the film succeeds in spite of them rather than because of them. They both seem to be working awfully hard in the dance sequences; neither achieves the kind of grace and effortlessness of the dancers they’re emulating. And the songs are also curious; until one climactic number delivered by Stone, they are all whispy little things. It’s almost as if these actors can’t really sing.

And yet, director Damien Chazelle (who directed the fantastic, and very different, “Whiplash” a few years ago) makes it all work. “La La Land” is somehow more than the sum of its parts. It casts a spell, and I was entranced by it. It’s a moviegoing experience unlike any other this year, but it’s not going to be for everyone. If you love old musicals, this is for you. If you are given to wistful, nostalgic, romantic moods, you’ll enjoy this movie. If not – if you’re more concerned about plausibility, or the “message” of a film – you might want to stay away and let those of us who secretly wish real life involved people spontaneously bursting into song enjoy ourselves. This is a movie for us.
“Hidden Figures,” directed by Theodore Melfi, is the story of

three African American women who worked at NASA during the space race of the 1960s. This is back when the term “computers” referred to people, not machines, and Dorothy Vaughn (Octavia Spencer) led an entire room of black women who did the math for the engineers and scientists who got all the glory. Mary Jackson (Janelle Monae, in what should be a star-making turn) was a talented engineer with no engineering degree, and Taraji P. Henson plays Katharine Johnson, perhaps the most gifted and brilliant mathematician on the NASA staff.

All three face significant challenges, and “Hidden Figures” spreads itself pretty thin to make sure all three stories are told. Vaughn can see that IBM machines will soon replace the jobs of the women she supervises and tries to prepare for that future. Jackson can only get her engineering degree from a school that is whites only. But the movie focuses mostly on Johnson, who has the opportunity to do groundbreaking work in the space program. But in order to do so, she must navigate a sea of white men who resent her presence, doubt her talents and even refuse to share a coffee pot with her.

Kevin Costner plays Johnson’s boss, who eventually learns to respect Johnson and see her as a valued colleague. But the film thankfully avoids any sort of “white savior” nonsense; Costner’s far too pragmatic and goal-oriented to worry about justice. He’s not interested in fighting racism or changing the world, he’s obsessed with getting to the moon before the Russians do. The ingrained racism of America in the ’60s is an obstacle in his way, so he gets rid of it, not because it’s the right thing to do, but because it makes his workplace more efficient.

“Hidden Figures” comments on the social milieu of the ’60s in an interesting way; these men at NASA are doing things never done before, inventing new machines and math formulas, and that means questioning conventional thinking every step of the way. You get the sense that perhaps that optimism and sense of being unbound from past ways of thinking about science and math made room for them to also reject the racial attitudes that had been in place for so long.

As a film, though, “Hidden Figures” feels a little too much like a civics lesson. These women have been unjustly written out of history until now, and theirs is a story that needs to be told and remembered. But it’s not a terribly dramatic story, and most of the time, the movie is too earnest and straight-laced, making almost no room for fun. A lot like “42” a few years ago, this is a movie I’m glad got made because of the importance of the subject matter. And both feel like movies destined to be screened in high school classrooms more often than future film festivals.n