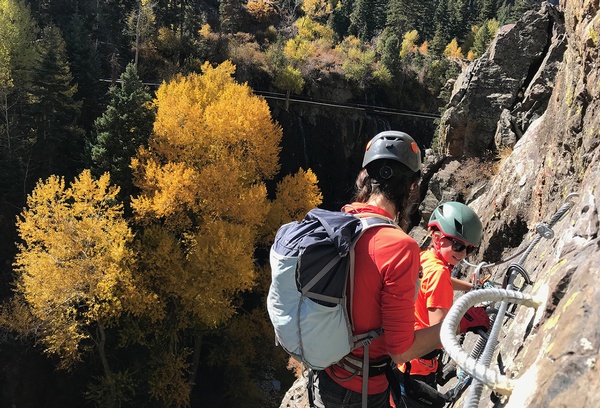 Navigating a stretch of Ouray's new Via Ferrata route earlier this fall. The 3/4-mile route will officially open to the public next spring./ Photo courtesy Friends of the Ouray Via Ferrata

The San Juan Mountain hamlet known for its world class ice routes is about to have a new route of a completely different element. The Ouray Via Ferrata (Italian for “iron path”) is expected to open next spring, offering nearly three-quarters of a mile of rock-scaling adventure through the Uncompahgre Gorge. The route was spearheaded by the Friends of the Ouray Via Ferrata, a nonprofit organization that so far has raised $200,000 through donations to build the route. The group was founded by Nate Disser and Mark Iuppenlatz, owners of San Juan Mountain Guides and the Red Mountain Alpine Lodge.

“We are thrilled to bring this adventure sport to Ouray,” Iuppenlatz said. “This human-powered attraction will help cement Ouray’s reputation as one of America’s top destinations for adventure enthusiasts.”

He added that the route, which will be open from May – October, will help bolster the shoulder seasons after summer and winter tourists have gone home.

“The Via Ferrata ... will become a big part of the Ouray experience and economy in the future,” he said.

There are currently fewer than a dozen via ferrata courses in North America, including one in nearby Telluride. The courses provide the thrill of rock climbing with additional safety measures, with users wearing special harnesses that clip into safety cables strung along the walls. Participants use either this cable or metal rungs bolted into the cliff face for hand holds and use pegs, rungs or rock ledges for their feet.

The route, which was built primarily by local rock climbers and mountaineers using local materials, is expected to open late next spring. When complete, it will take climbers both vertical and horizontal across the gorge’s steep walls, from just a few feet above the Uncompahgre River to hundreds of feet off the canyon floor, offering birds-eye views of the San Juan Mountains. There will also be two cable-suspension bridge crossings as well as two 200-foot “technical exits” for the more daring and experienced climbers.

The route follows along the east side of Ouray’s ice park but was planned so as not to interfere with climbing activity. It begins off the Ice Park Loop Trail at the south end of the park and continues north, ending just past the “Upper Bridge.”

“Care has been taken to create this via ferrata with the additional purpose of using it to access, and not interfere with, existing and potential new rock-climbing routes on the eastern ice park cliff faces,” organizers said. Future expansion is also possible.

Although the route is billed as challenging, with varied sections of narrow ledges, rungs across sheer rock faces, climbing and descending, and cable traverses – it is designed to the new safety standards set forth by ASTM, an international voluntary standards organization, and CEN, the European committee on safety standards. Climbers will be roped into a fixed cable the entire time using, and all users are required to have the appropriate gear, which will be available for rent from local companies. Local outfitters will also be available to offer guided trips and inside safety  and navigational tips for the course.

In the spirit of the Ouray Ice Park, the Via Ferrata will be free to the public – a first for North American routes built to the new safety standards.

Via ferrata routes were designed by the Italian military in WWI to allow soldiers to scale and cross rugged mountainsides. Beginning in the late ’70s, they became popular with recreationalists in the Alps and Dolomites, and now there are nearly 2,000 courses throughout western Europe.

The Friends of the Ouray Via Ferrata is still $50,000 from reaching its financial goal. To donate or for more information, visit ourayviaferrata.org. 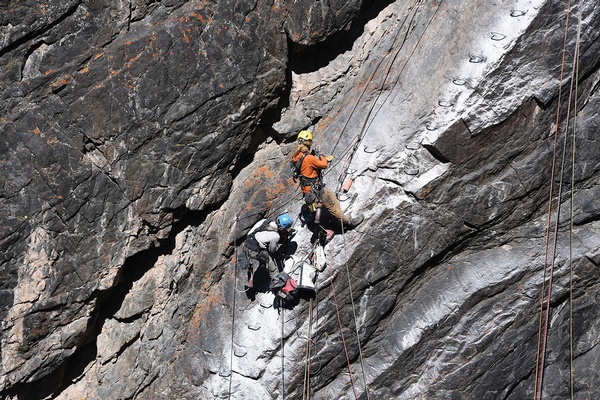 Workers bolt metal rungs onto a cliff face this summer. The Ouray Via Ferrata will offer the thrill of climbing with the safety of being clipped into a fixed cable./ Photo courtesy Friends of the Ouray Via Ferrat