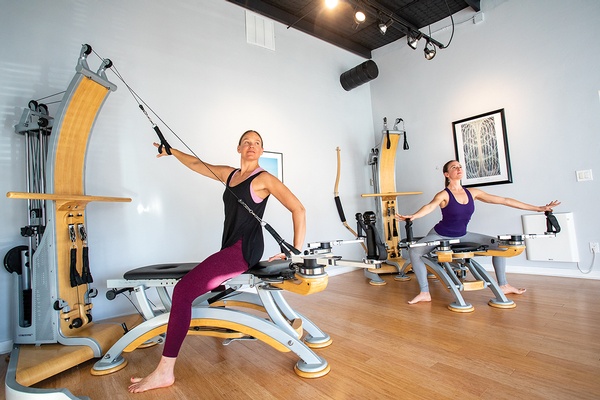 Jen Abbott, left, and Katie Clancy, right, co-owners of Studio Soma, work out on the studio's Gyrotonic equipment. The Highway 3 studio is the first to locally offer the fitness method, which focuses on spinal mobility by incorporating parts of yoga, dance, swimming and Pilates. The two say the no-impact exercise is good for everyone from people getting over injuries to Boomers to athletes looking to diversify./ Photo by Stephen Eginoire

Durango now has its very own spot to gets its Gyrotonic on. No, we’re not talking sauce-slathered, meat-filled pitas or trendy cocktails. We’re talking the latest in fitness, mobility and mindfulness all rolled into one – as if yoga and Pilates had a 3-D love child.

Tucked into an airy and light-filled studio on Highway 3, Studio Soma offers Gyrotonic (pronounced with a hard “g” and “y,” rhymes with pyro, for lack of a better comparison), its mat- and chair-based sister, Gyrokinesis, as well as standard Pilates.

While most of us are somewhat familiar with the story of Joseph Pilates, the creator of Gyrotonic is perhaps lesser known. It was invented by Juliu Horvath, a Romanian-born ethnic Hungarian who escaped the former Soviet Union and immigrated to the United States in the 1970s. After scraping by in the Big Apple doing odd jobs, the former principal for the Romanian National Ballet landed a spot with the Houston Ballet. However, he was soon sidelined with a ruptured Achilles, which sent him on a health quest. What ensued was an intense study of yoga and meditation – and the seeds of Gyrotonic was born.

Although his methods were originally targeted at dancers, he expanded the scope to appeal to all people, incorporating principles from yoga, dance, gymnastics, swimming and t’ai chi.

“Gyrotonic is not rigid, it’s very fluid, it’s very breath-oriented and spiraling. It allows the body to get supple and elongated,” explains Abbott, a former professional dancer in New York City who now dances with 20 Moons Dance Co., as she leads me to the “tower” during a recent session.

It may sound intimidating, but the tower is simply a wooden station with a seat and series of pullies, handles and circular, uh, spinamajigs, that use mild resistance to help support, stretch and strengthen muscles. For a Pilates drop-out such as myself, it may seem a bit foreign, but if it’s good enough for Lady Gaga, one of its avowed adherents, it’s good enough for me.

I take a seat and close my eyes. Painter tells me to breathe through my nose and exhale through my mouth. So far so good. Then we go over a series of cat/cow like motions, except in Gyrotonic, they’re called “arcing” and “curling.”

“It’s really about getting the body moving with the breath,” Abbott explains. “It’s very much based on spinal movement, making sure all your vertebrae can move in all the ways they were designed to. Not everyone is familiar with all these ways to move their spine.”

Myself included, as she works to wake up a few slumbering lumbars. With the basics down, and all vertebrae at attention, we move onto storming the tower, which proves much harder than it seems. See, once the circular movements are incorporated with 3-D motion of the spine, keeping the shoulders down, pelvis tucked, spine tall “like a circular coil” – don’t forget to move with the breathe – well, things get complicated. Sort of like trying to pat your head and rub your stomach all at the same time.

It may look easy, but Gyrotonic is something that requires practice, skill, grace and focus. You may not end up in a pool of sweat or panting like a hyena at the end, but those synapses and muscle fibers are firing just the same.

“It’s not just doing the motions,” said Abbott, who has been instructing since 2004. “It’s really having you be present in what you’re doing.”

Ah mindfulness, that 21st century buzz word, something we all could stand to have a little more of in this screen-obsessed world. Speaking of which, the dreaded screen neck is just one of the things Gryotonic purports to help. Abbott said it can benefit everyone from aging Boomers or folks coming off an injury to elite athletes or just a regular desk jockey looking to complement his or her existing fitness routine.

“I am more flexible and stronger and I can heal faster from little injuries now than when I was in my twenties,” said Abbott, 40. “It has really helped my system by making me stronger and more resilient.”

Because, as she explains it, to know one’s body is to harness its deepest powers: coordination, suppleness, long and lithe muscles, endorphins and all that other good stuff that comes from a great workout.

But first, it starts with a question.

“How are you feeling?” she asks me midway through our session.

I stare blankly, really quite oblivious to everything from the neck down. Apparently, this is common for newbies – tapping into the mystical mind-body connection is something that comes with time.

“It takes a while to build the awareness,” she said.

But I do know that despite the intense concentration that comes with trying to pilot two pulley-tethered legs from spasmodically herky-jerkying – while attempting to wrangle the ever-elusive breathe – I feel strangely relaxed. Almost as if I have tapped into that old familiar swimmer’s groove. Which isn’t by accident.

Painter said Gyrotonic incorporates much of the same, fluid motions as swimming or rowing – two more of Horvath’s passions. In fact, many of the movements borrow names from these disciplines, like the “breast stroke” and the “canoe,” which she demonstrates with the grace of a dancer (which she is.)

But if you’re not a dancer, or Lady Gaga, don’t worry.

As Abbott said, the method is all based on the same simple moves and builds from there. Sessions can be tailored to the individual.

“Whether you have an athletic focus or a therapeutic focus, you can work in the direction you want to go,” she said. It can be especially helpful for those who harbor ghosts of injuries past. “If you’ve had an injury for a while and have been moving in a certain way, your body has all those compensatory patterns, and even if that heals, your body still hangs onto that.”

Back at the tower, she tells me to squeeze my abs like a tube of toothpaste and envision my spine rotating like a chicken on a rotisserie – both imagery I can relate to – and the light goes off. Or at least I have a better understanding of the movements (and find myself suddenly hungry.)

For Abbott, the light and the hunger started the first time she tried Gyrotonic in 2003. “It was the only exercise other than dance that made me feel like I was dancing – the rhythm, fluidity. I thought, ‘This is how my body needs to move.’”

She said she has clients who come in once or twice a week to those who come in every day. She and Soma co-owner Katie Clancy, who is a Pilates instructor, see their studio as the antidote, if not a nice complement, to the hard-charging, uber-competitive fitness junkie Durango seems to have in such high supply. (Yes, I’m looking at you trail runners, mountain bikers, cross fitters and other exercise freaks.)

“There’s nothing like this in Durango,” said Clancy. “We really try to slow down and give people the ability to know their bodies.”

Which isn’t to say mastering Gyrotonic isn’t every bit as challenging as mastering, say, that overhead squat (sigh, some day.)

As they explain it, it’s like approaching the challenge from a different perspective, a “back door” if you will. It’s all about working smarter with your body, not harder. And, of course, always reaching, spiraling, rotisserie-ing and breathing to a better you.

“We’re continually learning, we’re body nerds, we love this stuff,” said Abbott. “We want to keep challenging our clients and challenging ourselves.”

(Studio Soma offers a variety of mat or equipment classes as well as one-one-one instruction. For more, go to www.somadurango.com.) 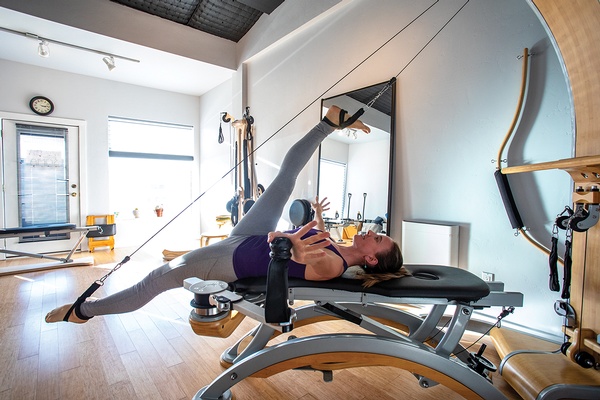 Clancy demonstrates a leg series. Gyrotonic was invented in the '80s by dancer Juliu Horvath, who used it to come back from an injury. The pulleys, with light resistance, allow for deeper stretching than just static stretching./ Photo by Stephen Eginoire