Not your normal normal
Pulitzer-winning, angst-ridden musical opens at DAC 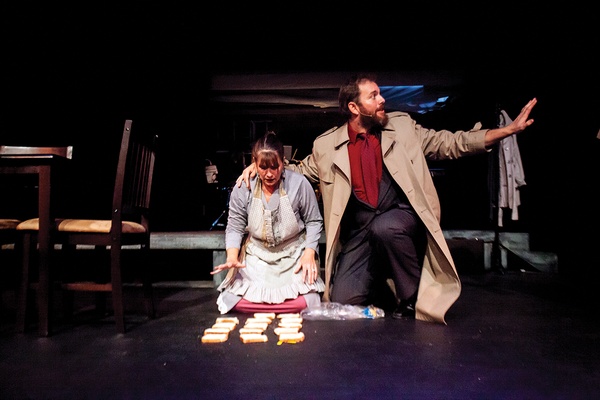 Jenny Fitts Reynolds, left, as Diana, and Ben Mattson as husband Dan rehearse a scene for the DAC's upcoming play "next to normal" on Monday night. The musical, based on a family's struggle amid the mother's battle with mental illness, open this Thursday./Photo by Stephen Eginoire

When it comes to musicals, theater goers typically expect to be entertained, and if the score is enticing enough, the show will generate toe-tapping, hum-along moments well after the curtain falls. However, “next to normal,” opening on Aug. 23 at the Durango Arts Center, is something more.

As explained by Director Theresa Carson, the play’s subject matter explores “a fragmented family’s search for connection, healing and forgiveness amid a mother’s struggle with mental illness.”

A Pulitzer Prize-winning play, “next to normal” (the playwright prefers lowercase) garnered a host of other awards during its run on and off Broadway. Debuting in 2008, it is a rock musical with book and lyrics by Brian Yorkey and music by Tom Kitt and has been called one of the best musicals of the 21st century. No mean feat for a story that centers around a mother struggling with worsening bipolar disorder and the effects it has on her family, along with issues of grief, suicide, drug abuse, ethics in modern psychiatry and the dark side of suburban life.

Casting such a production would be a challenge in any community, but fortunately Durango is home to an extraordinary range of talented actors. With more than 30 musical numbers, singing ability was a prerequisite for all the performers – adults and almost-adults alike (Carson put out a general casting call and also contacted Durango High School and Fort Lewis College.) The script has roles for three young actors, and Carson said a lot of passionate students showed up to audition.

The adult roles were eventually filled by some of Durango’s most recognized and acclaimed thespians. Jenny Fitts Reynolds takes on the difficult, emotionally draining part of Diana, the mother. In all, she sings in 17 of the numbers, which like opera, takes the place of dialogue during much of the performance. Off stage, Fitts Reynolds is also a wife and mother, as well as a school teacher. She remarked that the role of Diana is challenging as a whole. “The music is tough, and connecting to the emotional piece is difficult,” she said. But she said the real challenge was keeping the connections and through-line while singing the majority of her lines, sometimes in a lengthy song. “This role has much more depth,” she continued, “especially for a musical theatre character. Even though it’s a musical, it is more akin to a dramatic role.”

Also taking a lead role is Ben Mattson, director of DHS Theatre Troupe 1096 and a regional favorite known for outstanding performances in “Rock of Ages,” “Rocky Horror Show” and “RENT,” among other productions. He plays Dan, Diana’s husband, and has five solos plus a dozen numbers with other cast members. Not surprisingly, he admits to favoring musicals to other productions. “Musicals get a bad rap from people at times, but it’s an insanely versatile art form,” he said. “Musicals can run the gamut of drama and comedy, with an infinite (number) of styles in-between; as long as you can get on board with music being a vehicle to elevate what couldn’t be said with words alone.”

As for “next to normal” and finding his character, Mattson said Dan is quite different than any other role he’s done. “Fear runs a big part of his worn,” he said. “And smile through it, it’s part of his need to believe somehow that things aren’t as bizarre as they are.”

That isn’t to say “next to normal” isn’t also fun, engaging or without hope, Mattson added. “It’s a beautiful story that touches on so much; it isn’t scared to get deep or to hurt or to laugh,” he said.

Durango High student Siena Widen plays the daughter, Natalie. She has worked with Mattson on a number of DHS shows and been acting since she was a toddler and sings in 19 of the numbers. Much like her cast mates, she prefers musicals and says she loves the singing, the extra drama and the big flashy numbers in musical theatre. “The idea of a musical is a representation of what theatre means to me,” she remarked.

Widen admits the most challenging aspect of the play was relating on an emotional level to her character.

“Throughout  my childhood, I was very fortunate to always have support, attention and love from my parents, whereas Natalie is completely rejected by her family,” Widen said. “It pushed me more than other roles because I truly had to understand her, and therefore worked harder to portray her story. Natalie is the most real character I have played because she has real-life problems that real people can relate to.”

Luke McCauley, a senior at FLC, portrays Gabe, the son. In addition to dramatic roles, McCauley is no stranger to musicals, as he has performed in “Spring Awakening,” “Urinetown,” “Beauty and the Beast” (as the Beast. He said throughout this process, he and Carson discussed Gabe’s role as being the fine line between the

“magic amulet” that guides Diana toward her ultimate goal and the Evil Wizard, who leads her toward ruin, much like in Joseph Campbell’s The Hero’s Journey. “Finding the balance between these two entities has been my biggest challenge in this process so far,” he said.

Rounding out the cast is the ubiquitous and always remarkable Geoff Johnson in a dual role of Drs. Madden and Fine; Athan

If for some reason you are still wondering whether “next to normal” is right for you, Mattson summed it up with this:

“I think overall, Durango will love this show. Actually, I’ll up the ante. I think Durango needs this show, and I’m so proud to help bring it to our community.”

And then there’s this from Director Carson: “It is brilliant writing, completely stunning. And I do think it ends on such a hopeful note, it really is about people searching for light, for a way to connect and to make sense of this world.” 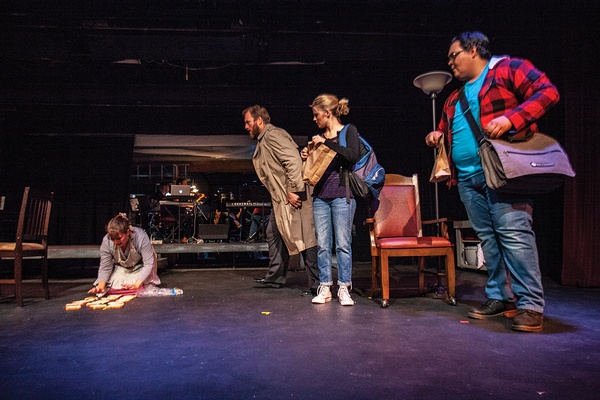 The cast for "next to normal" includes local students as well, including DHS senior Siena Widen (center) as daughter, Natalie, and FLC senior Luke McCauley (right) as son, Gabe./Photo by Stephen Eginoire

What: “next to normal”