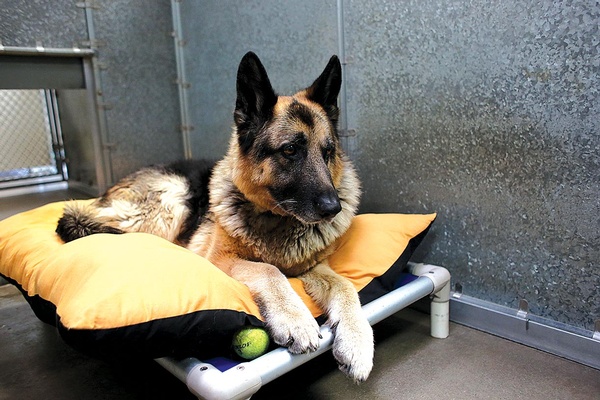 Champ, a 10-year-old German shepherd, is one of the senior pets up for adoption at the Humane Society./ Photo by Jennaye Derge

When Bob McGraw and his wife met a 7-year-old Chihuahua mix named Bear at the La Plata County Humane Society a few months ago, it was love at first sight.

“The dog immediately loved both of us,” McGraw said. “He showed a lot of energy in his walk for being 7 years old – he didn’t seem like an old timer.” They fell in love and put a deposit on him that day.

Now the 15-pound “cuddle bug” enjoys frequent walks on the Animas River Trail, and the couple couldn’t be happier.

“He’s constantly wagging his tail. People on the River Trail are always telling us they call him ‘that happy dog,’” McGraw said. “We make him happy and he’s making both of us happy. It’s a win-win.”

Though older pets like Bear can be wonderful companions, “senior” dogs and cats aged 7 years and older are often the last to be adopted from animal shelters. So each November, Adopt a Senior Pet Month highlights the benefits of adopting these golden oldies.

Chris Nelson, director of animal services at the La Plata County Humane Society (LPCHS), said senior animals have a tougher time getting adopted because so many people want to “mold” a puppy or kitten and watch them grow. People also comment that adopting a senior pet would be “too sad.” Still, he said some people specifically seek out senior dogs because they’re typically housetrained and don’t have as much energy to expend.

“You can still be active – I know a border collie that hiked the Colorado Trail when she was 7 years old, so that’s totally doable,” he said. “But at the same time, if you’ve had a rough day and don’t feel like taking them for a walk that night, that’s not typically going to manifest itself in some destructive behavior, like you might find with a 1-year-old dog.”

He said the shelter has successfully rehomed cats as old as 18 because they’re so content lying on a windowsill or in a lap.

Senior cats and dogs almost always land in shelters through no fault of their own – Nelson noted that owners often surrender the animals when they are moving or don’t want to have to pay for future veterinary bills. To help increase adoptions, LPCHS introduced the “Seniors for Seniors” program earlier this year: adoption fees for senior dogs and cats are waived for people over the age of 60.

“It’s hard on all animals that have to spend time in shelters, but it’s even harder for the older guys,” he said. “I think the biggest benefit of adopting a senior is getting an animal who is going to give you unconditional love – and you’re going to feel good about yourself for getting the animal out of the shelter.”

Mandy Mikulencak and her husband adopted a 10-year-old cat named Walter Matthau from LPCHS in January 2015. He’d just lost an eye to infection, was deaf and had balance problems (among other health issues), so they thought they’d essentially be giving him hospice care. But nearly three years later, he’s still thriving in their home.

“Walter makes us laugh every day,” she said. “Even after three years, we’re constantly shouting to the other, ‘Come quick! Look how sweet he is!’ We have never regretted adopting him. He brings us that pure, unadulterated joy that’s usually reserved for children ... We will always adopt seniors and special-needs cats. Some seniors require a little extra attention, but it’s worth it.”

“The people who adopt older dogs, in my opinion, are the most compassionate, most giving and big-hearted people that you want to meet,” she said. “They know they’re going to get hurt sooner than later ... but they’ve just got the biggest hearts in the world.”

Once approved, people interested in adopting a senior dog from Annie’s Orphans can take one home on a trial basis. Anderson also works with folks who aren’t ready to formally adopt but will foster a senior as long as it is healthy – if medical issues arise, she’ll take the dog back (the shelter now has an on-site infirmary) or fund raise for veterinary care. She finds the extra effort worthwhile because it offers senior dogs a chance to live out their final years in the comfort of a home.

Dog trainer Traci Moriarty, owner of Wag Between Barks and founder of Durango Dog College, said a number of her clients have adopted senior dogs. This summer, she trained two mixed-breed dogs – aged 9 and 10 – and they passed the American Kennel Club’s rigorous Canine Good Citizen test.

“You can always teach an old dog new tricks,” she said.

She recently taught a virtually toothless 8-year-old poodle rescued as a stray to “sit” and is training a 7-year-old Newfoundland in the sport of nose work; as a result, his owner says he’s acting 5 again.

Inspired by Adopt a Senior Pet Month, Moriarty is now offering $25 off classes for anyone who adopts a senior dog (7 or older) from a local shelter or rescue organization.

Durango resident Jola Schraub and her husband weren’t planning to adopt another pet when their son introduced them to Buzzy, a senior terrier mix rescued by Annie’s Orphans from a high-kill shelter in Missouri. A veterinarian estimated Buzzy was 10-14 years old based on the condition of his teeth.

“Buzzy liked to kind of sidle up to somebody and just sit there. I think he was so grateful for human companionship after being dumped at the shelter in Missouri,” she said. “We fell in love with him.”

Buzzy lived for another six years with comforts like a soft bed, quality food, toys and until the last year, a canine best friend, Annie. Schraub said giving the senior dog a loving home was incredibly rewarding.

“There’s just something special about an older dog. What does the quote say? ‘Saving one animal won’t change the world, but it’ll change the world for that one animal,’” she said. “I would adopt a senior again in a heartbeat.” 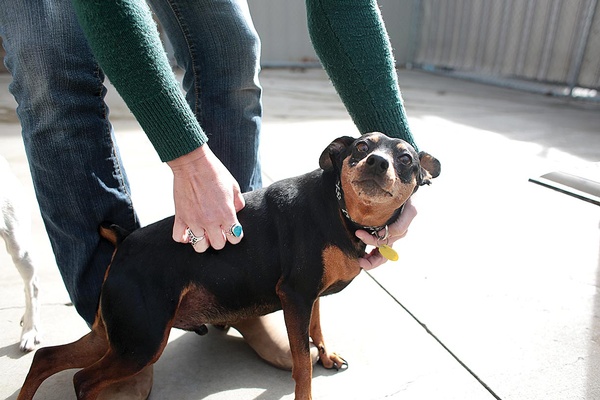 Pogo is an 11-year-old miniature pinscher who is currently living at the Humane Society shelter. November is Adopt-a-Senior-Pet month, to call attention to older dogs, who do not get adopted as frequently as puppies, but do come with advantages of their own (such as being pre-house trained.) In addition, dogs 7 years and older can be adopted for half the price of younger dogs and a third of the price of puppies. (Small breeds cost slightly more.)/ Photo by Jennaye Derge.

• Will the individual dog or cat fit your lifestyle?

• Will children in your home be gentle with the animal?

• Will you be able to afford veterinary care if medical issues arise?

• Will you be able to lift a large dog if need be?

“If you live upstairs and you’re adopting a senior golden retriever who weighs 70 pounds and at some point might need help getting up and down the stairs, you should probably look for a Shih Tzu,” quipped Chris Nelson of LPCHS.

The most important consideration, he said, is simple: “Just be prepared to give them a good, quality life.”