On Stage: A quest like no other
Merely Players brings Don Quixote to the DAC 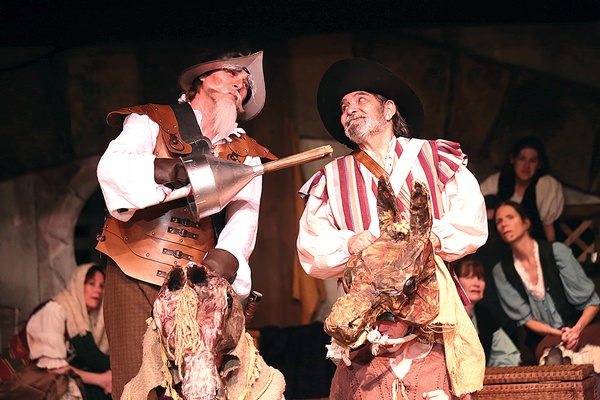 Jason Lythgoe as Don Quixote, left, and John Garza, as Sancho, right, in Merely Players' "Man of La Mancha." The classic Cervantes story plays at the DAC this weekend and next./Photo by Jennaye Derge

Miguel de Cervantes’ 1615 masterpiece, Don Quixote, has been translated into more languages than any other book except the Bible. The story parallels Cervantes’ own life in that he was imprisoned twice, was a soldier maimed in battle, had been a tax collector, was held captive in Algiers and died in poverty.

Several films have dramatized the journey of Don Quixote and his trusty man servant, Sancho Panza. But it wasn’t until the 1960s that the musical “Don Quixote, Man of La Mancha,” was first produced, earning a Tony award for Best Musical and later, Oscar nominations for musical score and acting.

Happily, Mona Wood-Paterson and Charles Ford’s Merely Players have chosen it for their next production. Opening at the Durango Arts Center on May 4 and running through May 13, it is a special gift to our town.

“’Man of La Mancha’ is one of the most famous musicals in American history,” Wood Patterson said. “Although it opened in 1965, it is still beautifully relevant today, as it tackles themes of discrimination, religion, mental issues, sexual assault and persecution.”

The play’s roles – 24 in all – have been filled by A-list performers in whose footsteps now stride some of Durango’s most beloved actors. “The open audition resulted in one of the deepest casts Durango has ever seen,” Wood Patterson said. “Nearly everyone in the cast has played a lead before.”

With that many players to dress, costuming required enormous effort, and JoAnn Nevils weaved theatrical magic into every garment. In addition, the inimitable Ford has designed and fabricated one of the most extraordinary sets conjured on the DAC stage. His props and accessories, such as helmets, swords, armor and horse heads, are pure genius. Audiences are in for a real treat even before a word is spoken, a song sung or a note played. Speaking of song, musical director Ivy Walker not only conducts the cast throughout, but also coached and arranged the score with on-point precision.

There are, of course, dance numbers in a musical, but as choreographer Suzy DiSanto explained it goes beyond that. “There is more movement and dancing in this show than you would expect,” she said. “Basically, I choreographed horses, Moors, combat, rape; any movement that was needed to tell the story.”

Her fifth production with Merely Players, she spoke reverently about the play’s theme. “It’s a story of redemption, a story of hope, a story of social justice, a story of true love; we need that now and always,” she said. Her Dulcinea is feisty, angry, victimized and essential to the storyline, and Gardner sings with a power and emotion worthy of the part.

Originally from Texas, this is Garza’s first time with Merely players although he recently portrayed Tevye in Sandstone Production’s “Fiddler on the Roof” in Farmington. An actor and musician since the age of 7, he is an engaging presence and every bit the consummate professional, with a mesmerizing voice and acting talent. Garza reflected on the challenges of playing Sancho Panza and admitted that he sees some of the squire in his own personality. “As the man servant indebted to Quixote for saving his life, the challenge was (melding) the two separate personas,” he said.

Meanwhile, playing the lead role is Lythgoe, one of Durango’s more gifted artists. No stranger to singing, Lythgoe was charged with vocalizing one of the most iconic songs in Broadway history: “The Impossible Dream,” which has been performed so many times it is part of cultural history. Daunting as that was, Lythgoe rose to the occasion, his singing as good as you will hear on any stage. “I’ve had the pleasure to be able to sing many well-known songs on stage over the years and felt good with my renditions of them,” he said. “‘Impossible Dream’ is the granddaddy of them all.”

Combined with Lythgoe’s flawless acting, his Quixote is of award-winning caliber. “What I am enjoying is taking that song (Impossible Dream) everyone knows and showing them what it means to my Don Quixote,” he said. “As the song says ‘No matter how hopeless, no matter how far,’ he will try no matter what stands in his way. Daunting, yes, but I’m thrilled to perform the song as Don Quixote, not Jason Lythgoe.”

Adding to the unforgettable songs are some memorable lines that are a reflection of today’s complex world, quotes such as: “Facts are the enemy of truth,” and “He may be the wisest madman or the maddest wise man,” and the prescient “When life itself seems lunatic, who knows where madness lies?”

The cast, often with as many as 20 actors on stage at once, transports the audience to a prison, a tavern, and a 17th century Spanish courtyard. More-over, the rousing finale will likely have the audience on its feet, dabbing at their eyes and cheering wildly.

What: “Man of La Mancha” the musical presented by Merely Players