On Stage: Battle royale
How to make a playground brawl really ugly? Involve the parents 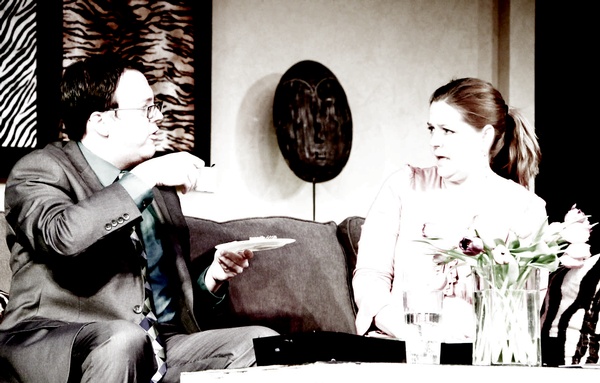 Geoff Johnson and Theresa Carson in a scene from "God of Carnage," which open Friday at the DAC./ Photo by Brett Masse?

Yasmina Reza is a French playwright and novelist whose works have been translated into more than 30 languages, including the satirical plays “Art” (1998) and “God of Carnage” (2009), both of which won the Tony Award for Best Play. “Carnage” also garnered a Best Lead Actress honors for Marsha Gay Harden and Best Direction for Matthew Warchus, while the London production received the Laurence Olivier Award for Best New Comedy.

The film version, directed by Roman Polanski, starred Kate Winslet, Christoph Waltz, John C. Reilly and Jodie Foster as two middle-class couples who meet to discuss their children’s playground fight and its aftermath: two missing teeth. The play’s pedigree however, was only one reason Merely Players’ Mona Wood-Patterson and Durango Arts Center Theatrical Director Theresa Carson chose it for their fifth collaboration. Opening Fri., Feb. 17 for six performances, “God of Carnage” will likely raise some serious questions for viewers; questions about civility and how quickly it can revert to basic instincts. As their polite discourse quickly unravels, the couples’ argument intensifies and exposes hidden personalities, troubled marriages and opposing world views. Emotional buttons are pushed and boundaries of behavior attacked, deteriorating into a playground-esque fight of its own.

Describing the association between the DAC and Merely Players, and why they selected “Carnage” as this year’s winter production, Wood-Patterson remarked that their focus has been on contemporary plays with thought-provoking material. “(God of Carnage) fit the bill,” she acknowledged. “It is also very timely, as four characters with an array of perspectives come together to try to figure out a problem, but the veneer of civilization quickly fades away.”

Adults acting like rude petulant children occupy much of today’s news and have been challenging our perceptions of what is acceptable conduct. In “God of Carnage” we might see our neighbors or even ourselves and, at its core, the play is a dark comedy, exposing veiled beliefs on sexism, parenting and marriage.

The stellar cast chosen to portray the dueling pairs includes Geoff Johnson as Alan; Jill Davis as his wife, Annette; Jason Lythgoe as Michael; and the Arts Center’s own Carson as Veronica.

“It’s a fantastic way to combine the talents of our two companies,” said Wood-Patterson. “(Carson) is a director’s dream; she knows her stuff, so I am delighted to get to work with her whenever I get a chance.”

Wood-Patterson first discussed the role with Carson when they decided to do “Carnage,” and both agreed that the part of Veronica was a wonderful role for her. Although all the other cast members have worked with Merely Players in the past and are seasoned thespians, each went through the auditioning process.

Davis, for example, was last involved in Merely Player’s production of “Shrek the Musical” and is an alumnus of Colorado State University’s and Fort Lewis College’s fine arts and theatre programs. “I love that this piece explores the evolution of conversations and relationship dynamics between ordinarily civil individuals,” the lifelong resident, who plays Annette, said. “It is fascinating to watch the development of tensions within each couple, as well as the ebb and flow of the conversations and allegiances between all four individuals.”

In her role, Davis provides some of the funniest, as well as tersest, moments on stage. Johnson, as her attorney hus-band, Alan, is more involved in his interruptive cell phone calls than resolving his “savage” son’s schoolyard fight. For

his part, Johnson acknowledged that he saw “God of Carnage” as a great opportunity, but also as a great challenge. Because each character has strong views and often delivers lines that are designed to hurt, Johnson admitted he had to get into the mindset of someone whose world view is different from his own. “It teaches me a lot about myself to view things from another perspective,” he said.

Explaining his role as Veronica’s husband Michael, Lythgoe said his character wears a few different hats in the show. “He play’s devil’s advocate, tries to smooth things over and calm things down, then switches into Neanderthal mode,” Lythgoe said. He makes

the most of his character’s flip-flopping and exhibits passive-aggressive tendencies throughout the performance. Unsuccessfully attempting to avoid conflict, he invariably causes it with his wife.

Insults are hurled; snide comments and accusations leveled; and demands, arrogance, and at times unabashed rudeness, permeate the dialogue. But there is also tension-breaking hilarity in the course of the play. Physical revulsion may seem an unlikely choice for humor, but it is handled so deftly by Davis and the other cast members that the audience will find it to be a riotous interlude.

Wood-Patterson’s casting is superb; the actors are well matched as husbands and wives; protagonist and antagonists; and each gives outstanding performances. Charles Ford’s set is a reflection of Veronica’s taste and lifestyle as a writer with a penchant for Africa. The room, in which all the stage action takes place, contains animal skin prints and African artifacts along with coffee-table art books, which play a part in the previously mentioned hilarity.

Although the language and subject matter are for mature audiences, “God of Carnage” is a welcome addition to the adult offerings at the DAC and definitely recommended.

What: “God of Carnage,” a play by Yasmin Reza