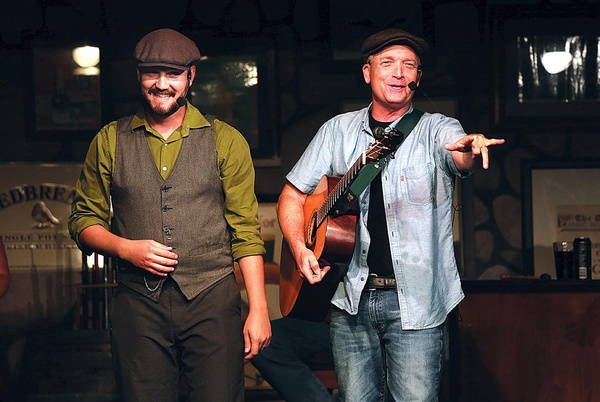 Walking into the Strater Hotel is akin to stepping onto the set of “Westworld,” but without the robots. The furnishings, the Diamond Belle Saloon, the charming theater, the “gun fights” all conjure a time when Main Avenue was dirt and hitching posts lined the street.

Maintaining the “Old West” experience is a tradition for the Strater, particularly throughout the summer when tourism is flourishing. The plays and entertainment in the theater have retained that aura whether it was past Melodrama productions or original plays such as “Guitar Strings, a Cowboy and a Lost Peacock.”

This summer there are two new offerings: “The Legend of Danny Boy;” and the broadly titled, “The West – In Story and Song.” And in case you’re wondering, Danny Boy does indeed refer to the Irish ballad of the same name, but you’ll have to wait until after intermission before hearing about it. The tale of how the song came about and its connection to our region is the premise for the show, but it is more of a Celtic jam session than a play about “Danny.”

After an hour on stage, the musicians and performers present a story about an Irish lassie by the name of Jess Weatherly who eventually moves with her husband to Ouray in search of gold. The evening’s entertainment is based on a ceilidh (kay-lee), a traditional Irish house party featuring song, poetry, dance and storytelling. The audience, for its part, is encouraged to participate, and performers frequently step off the stage to engage them. The Strater touts its summer fare as family friendly, but be forewarned, “The Legend of Danny Boy” fosters the stereotypical image of the heavy-drinking Irishman.

The performers exhibit great talent and enthusiasm, including the lovely voice of Brin Devore, a recent FLC graduate who was last seen in “The Producers” and the Strater’s “The Rocky Horror Show.” Alongside her is fiddler/violin player Dennon Jones, currently a student in the FLC Music Department (some nights he is replaced by understudy Elizabeth Davis.) Also featured is narrator Riley Alderton, who co-wrote the play with his father CJ Alderton.

Strater owner Rod Barker approached the senior Alderton, the 2016 winner of DAC’s 10-Minute Play Competition, to create an original play, and “Danny Boy” was the result. Shiela Lane, the show’s musical director is, like CJ, a member of local Celtic Band, Patrick Crossing. She plays a mean “penny whistle” and helps keep the action lively. Bob Condon is the lad playing the Celtic drum called a bodhran, which he does regularly with the Kitchen Jam Band, another local Celtic group.

In addition to “The Legend of Danny Boy,” the Strater is showcasing a number of well-known guitar and banjo players and story tellers who bring the West to life in the summer’s second offering. Local resident Karen Little was enlisted by Strater General Manager Michelle Martinez to develop “The West.”

With a masters degree in theatre and communication, Little is quite familiar with all aspects of production and casting. She admitted to a long time affinity for the West and its music.

“My dad worked at Mesa Verde for the Civilian Conservation Corp during the Depression and fell in love with it,” she said. Eventually retiring to Durango she attended the Cowboy Poetry Gathering and became enamored with cowboy poetry and music. “I served on the board for the Gathering for 10 years and spent most of that time as their talent wrangler,” she said. “I find that if people expose themselves to really good western poetry and music, they often fall in love with it.”

She said the Strater is a natural showcase for the 15 different performers she corralled to appear throughout the summer alongside emcee and “mistress of ceremonies,” Carol Heuchan. An Australian award-winning poet and horse-woman, she has been a regular performer in North America for the past nine years and has five highly acclaimed books and CDs to her credit.

Martinez said she and Little selected a different artist for each week to do the Wednesday to Saturday shows. “Each performer will bring their own style and version of the historical West to the stage,” she said.

With summer only half over there is still time to catch the nine remaining entertainers. One delightful example of the summer’s musical experience was last week’s performance by Mike Moutoux, an authentic cowboy-singer-songwriter-poet from Silver City, N.M. His delivery is kind of “aw shucks,” with an occasional epithet to spice up the patter. His references to Jack Palance in the 1991 film “City Slickers” might be lost on the younger crowd, but he uses it to introduce a few songs about love and missed opportunities. Also in that same year country singer Jerry Jeff Walker introduced a song titled “Navajo Rug,” and Moutoux’ rendition was an appropriate addition to the reverie. Between songs and an occasional poem, he shares stories of life on the range as well as his joy in being a cowboy in the 21st century.

When describing this season’s offerings, Martinez’ is enthusiastic. “Both shows incorporate local history and comedy, and walk you through a piece in time that most people never experienced,” she said. “For decades, people have been intrigued by the cowboy and the West, as well as the miners of the area. These two shows help put the pieces together to tell a story and bring entertainment to the feet of each audience member.”

The remaining troubadours a headin’ to the Strater from now through mid-September are sure to add their own “brand” to the round-up. Being cast back to a simpler time, even if only for an hour or two, is a welcome relief from today’s woes. So saddle up, join the posse, and head on over to the Strater. 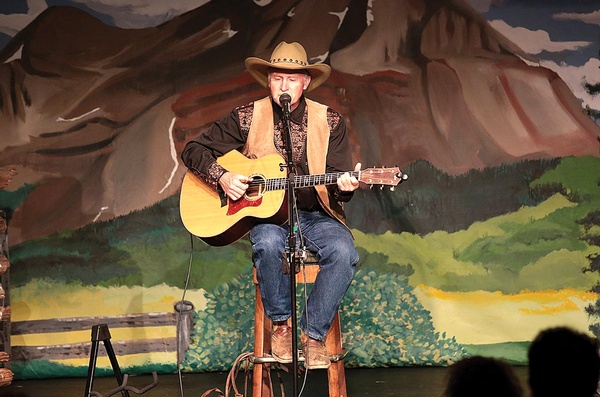 What: “The Legend of Danny Boy” and “The West - In Story and Song”