On stage
Storming the stage: Shakespeare returns to the hill with 'The Tempest' 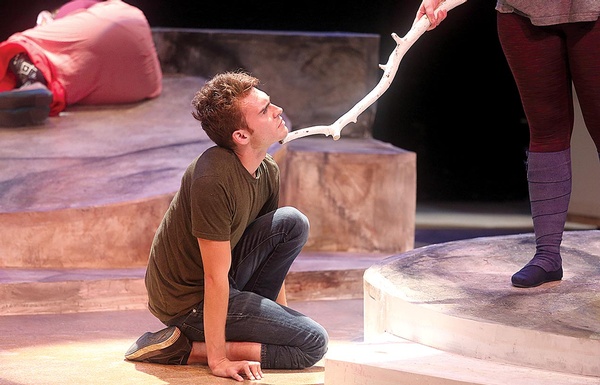 Ethan Moats as Ariel, the spirit./ Photo by Jennaye Derge

It’s been six years since Macbeth paced the stage at Fort Lewis College, so another Shakespearean play seems long overdue. Beginning on Fri. Nov. 4, the FLC Theater Department storms the stage in an ambitious production of “The Tempest,” a story of shipwreck and exile, revenge and redemption, intrigue, magic, and the lust for power.

Penned by the Bard in 1610, the narrative begins with Alonso the King of Naples aboard a ship that is caught in a violent storm. On a nearby island, the exiled Duke of Milan, Prospero, tells his daughter, Miranda, that he has caused the storm with his magical powers. As often occurs in Shakespearean plays, the plot thickens as the characters speak their thoughts aloud pulling the audience into the play.

In a twist of its own, the FLC production as directed by Professor Ginny Davis, changed a few of the roles from
male to female. In this case, Prospero is now Prospera (Katie Ragan) while Antonio (Shaunibah Morfin), Franciso (KC Caimi) and Gonzalo (Ashley Wiliford) are also portrayed by female students. Davis’ rationale for changing genders is a practical one, “This play is written for lots of men and only one woman,” she explained, “(But it isn’t) fair to our theater majors to cast it that way.”

Most drama enthusiasts know that in Shakespeare’s time, actors were all men (even the female roles), so the present irony is fitting. In the case of lead actor Ragan, Davis remarked that she was the best “man” for the job. “It is a role that requires not only the ability to tackle the text,” she commented, “but it requires a great deal of maturity as well. (Ragan) brings a strength to the role that is exciting.”

Ragan, by far, has the most lines to deliver, and does a formidable job, commanding the stage as she inhabits the lead role.

One of the most admirable facets of the FLC Theater program is how much experience the students gain through the hands-on curriculum. As with other theater pieces at FLC, this show is student-designed including the sound, lighting and costuming.

In the hands of Isabella “Izzy” Struss, a senior theater major, the costuming for “The Tempest” helps define actors’ on-stage persona. Working alongside longtime costume designer Jane Collard-Gould, Struss took some imaginative styling cues from fashion icon Alexander McQueen and mixed in renaissance themes, steam punk and, as she put it, “parts of modern 21st century fashion.” Her enthusiasm and gratitude was palpable when she remarked, “I won’t take credit for wanting this show to be non-Shakespearean. I hoped, I wished, and I dreamed, and Ginny (Davis) gave me a little gift called, ‘timeless fantasy world.’ I about died from excitement!”

Costuming for the character Caliban, portrayed by Steven Hanson, and the satyr-like Ariel (Ethan Moats) are but two examples of Struss’ creativity; she and Gould’s garment wizardry is a performance in itself.

Speaking of performance, Moats’ portrayal of Ariel the spirit is a physically demanding role in which the agile and energetic actor bounds effortlessly from point to point on stage, often while playing a Pan pipe.

Shakespeare can be daunting for audiences and actors alike due to the anachronistic language and rhythm. According to Davis, the challenges are worth the effort and also raise the bar for her students. “As a teacher, it is pretty fun to see that ‘light bulb’ moment when a student gets it,” she said. “Once (they) get a feel for how the language is constructed, it all starts to fall into place. Additionally, because of the iambic pentameter, there is a rhythm to the text that we don’t want to destroy. The result of this is that actors need to ‘retrain’ their brains to act and talk simultaneously; a uniquely Shakespearean challenge.”

In terms of comprehension, “The Tempest” might well be considered one of Shakespeare’s more audience-friendly works, but it helps to have some familiarity with the plot in order to follow the action. That said, the opening storm and shipwreck scene is both creatively staged and dazzling in sight and sound.

With 19 actors in the cast, it’s difficult, at best, to share comments on everyone’s performance. Other than those mentioned above, however, one stand-out actor in particular is Izabella Gray, who plays Prospera’s daughter, Miranda, a pivotal character in the unfolding drama. She, of all, appears to be most comfortable with the antiquated speech patterns. Helping to maximize an FLC Theater major’s education is a selection committee, which chooses shows that cover a wide range of styles and genres. Davis explained that the committee consists of all theatre faculty and two student representatives selected by the faculty. “There’s a lot of extra work for the students,” she acknowledged, “so we want to make sure they stay dedicated to the task.”

There is little doubt that Shakespeare’s plays are challenging for any actor and when given the chance, most will try, but not all succeed in doing it well. The FLC cast gives a noble effort and theater lovers will want to support the endeavor. In this confused election time, “The Tempest” provides an evening of entertainment with its allure of power, a semblance of justice, and the difficulty of distinguishing men from monsters. Sound familiar?

“The Tempest” runs about two hours with a 15-minute intermission.

What: “The Tempest,” by the FLC Theatre Department