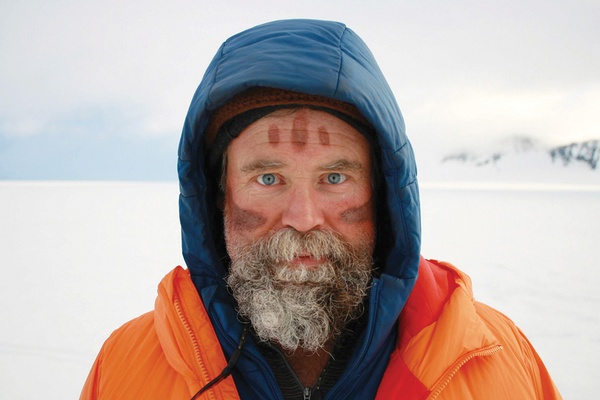 Author Craig Childs on the Harding Icefield in Alaska. The Norwood-based author switches it up with his latest book, Virga & Bone: Essays From Dry Places, a collection of essays about the desert. He'll be at Maria's Bookshop tonight to sign copies and read excerpts, scripted and otherwise./Photo by Sarah Gilman

Author Craig Childs is no stranger to these parts. Many of his award-winning and bestselling nonfiction books (from House of Rain through to Atlas of a Lost World) stem from deep roots in the Four Corners, and he has long lived just up the slopes from here. His events at Maria’s Bookshop always draw a civil and well-read mob. Yet just when we think we know what to expect from Childs, he brings something different to town.

This evening (Thurs., Nov. 7), Childs will present and sign copies of his newest book, Virga & Bone: Essays From Dry Places. This little book brings the author back home again; in his most recent books, he’s been busy asking The Big Questions, things like How Did People Get Here and What’s the End of the World Look Like? But those questions kept drawing him farther afield, and while they are the big picture, they’re not the full picture.

“They are secondary to what’s really going on in my life, which is: get out on the ground and wander around and see where you are,” Childs said. “This (book) is more what my life is like.”

Virga & Bone unifies eight essays about the desert with Childs himself as the thread. Few among us have spent as much time in deserts as he has, or have researched them as intensely.

This book doesn’t lean on research, like those Big Question books do. And while his deep understanding of the desert springs forth in every description, lending him weight, giving him authority, his knowledge is not the point.

Rather, the point of this book appears to be experience. The way the desert experiences humans, at least as much as the way humans experience the desert.

Many readers call Childs a poet for the way he has of reinventing the world right before our eyes. I hadn’t even tasted my tea yet when I found my first such example: on page 2, he writes of “clouds of sprig-green creosote bushes” in a landscape where clouds of any kind are worthy of mention.

For readers who enjoy the magic of having the  familiar re-presented to them in this way, Virga & Bone offers this more densely than many of Childs’ other works: untroubled by Big Questions, these essays thrive on immediacy and read with urgency.

Urgency, but not hastiness, which is quite a feat considering the book’s origin story. Childs attended the annual Winter Solstice Burn in Bluff, Utah, last year, and in the light of the brushwood coyote climbing the ladder of smoke to the sky, he chatted with the editor of Torrey House Press.

He said there was a different kind of book he wanted to write. She said they’d love to print it. Less than a year later, the book exists.

“One of the ideas of this book is that it would be short and sweet and really focused, and I would write it quickly,” he said. “In this case, I wrote it in one week sitting in a room in this rammed-earth house in the desert outside of Tucson.”

He described how he writes most of his books across various places: in Durango, New York City, at home, alone in the backcountry. The places he goes change his writing, he said; his writing is susceptible to the voices around him, the atmosphere, the temperature, the terrain. So with Virga & Bone, he wanted to experiment. What would happen if he stayed in one place and didn’t leave?

“All this stuff is new. It’s fresh material,” he said. “So I wanted it to be created there. I wanted to remember the stories from one place.”

Great art comes from restrictions, and these essays show the effects being consolidated in time and space. The language is rich, and the ideas sharp. And the voice is distinct from Childs’s other works, too.

He writes in a way that feels to readers less like he is regaling them with grand stories, and more like they’re hearing familiar family stories at Thanksgiving. At least, that’s true for desert-dwellers and those of us who keep finding our way back to the desolate, hard and open places of the world.

Those are the people this book is for.

“I consider this more of a locals’ book,” Childs said.

“I wrote it for people here. I didn’t write it to entrance people who aren’t already entranced. People reading it already know. I’m just reminding them or maybe enhancing it.”

Perhaps fitting a smaller book, Childs is doing a small media tour. He interviewed for this piece on the phone from the Banff Mountain Film and Book Festival, where he was talking about his previous book instead of this one.

Maria’s Bookshop, here in Durango, is the only stop listed on his website’s tour dates. In other words, this really is a locals’ book. And Maria’s is the only place he knew he had to take it.

“Maria’s is a home bookstore for me,” Childs said. “I have to come to Maria’s. It would be weird if I didn’t. I don’t think my life would be complete. I think Maria’s is one of the first places I ever came to read. So there’s a place in my life that Maria’s occupies, and Durango. It’s an important spot for me.”

In fairness, he did give a talk in northern Wisconsin right as the book was coming out – though he was talking about a desert traveler’s perspective of the Lake Superior shore, rather than this book. He asked people in the audience what they thought about his descriptions, and they said, “The desert seems like a place that I would never want to go.”

“I hear that a lot,” Childs said. “I wonder if maybe that’s true. Maybe the desert is just awful, and some of us just love awful things.” If that is true, then plenty of people in and around Durango love awful things too. The desert speaks to us (and for us) in ways that non-desert people may never fully understand. This evening at Maria’s will give desert people of all persuasions the chance to congregate, commune and share stories from one of the many great story-tellers among us.

Of course, books will be for sale at the bookshop, and Childs will give some sort of talk and reading. He admitted that whatever he plans for these events often goes right out the window 20 minutes before – so he can’t make promises what people will get.

With one exception.“I will be bringing my flute,” he said. “I know that. Which is not what I usually do at events, but Maria’s is a good place for that.”

Cost: Free and open to the public. Books will be available for purchase